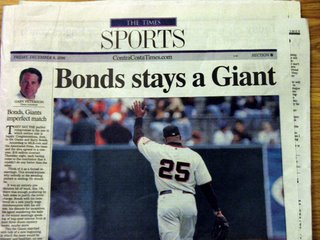 Good news first...the biggest Giant of them all stays put. Thanks to Peter M, Larry B and the rest of the Giant ownership group for resigning the Main Man for next season. Only 22 more HRs to go. Yay! Bonds! 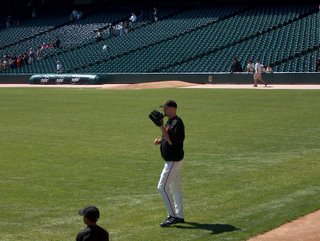 Bad news next....Jason Schmidt, seen here in pre-game warm-ups, have decided to trade in his orange and black in favor of the most hated (in these parts) Dodger blue duds. Jason was a great Giant and his leaving while hurtful will pave the way for young bloods (in the mold of Matt and Noah) to take their spot in the major league. Still a question in my mind is are we putting the two Barrys of the Bay (Bonds and Zito) together in one team. I certainly hope so.

Another good news is the signing of the best defensive first baseman I have seen, JT Snow, to a position in the front desk, which would have him in the booth for some games. Nice to have you back JT.
Labels: california san francisco