The Long Way Home (For The Holidays)

As you may have guessed, I was away for a month here on the blog because we went to Asia to be home for the holidays. Paralleling some of the cinematic disasters of movies about going home for the holidays, we encountered obstacles at every point I thought. I also believed that everything that could go wrong went wrong with this trip.

Let me tell you all about it.

December 16. My older brother agreed to take us to the airport for our midnight flight(Dec. 17). We arrived before 9 pm and found that the airlines was starting to check passengers in. My husband thought it was too early to check in. But moments later we were also checking in, just before the crowd arrived. Our trip consisted of multiple connecting flights - San Francisco to Taipei to Denpansar (Bali, Indonesia overnight) to Kuala Lumpur and eventually to Dhaka in Bangladesh, our destination.

At the check-in counter my passport scanned without a hitch. While my husband's passport received a visit with the supervisor. Apparently when the clerk scanned the husband's passport, it raised a red flag on the computer and the screen cannot be overridden. The supervisor explained the reason for this visit is that his passport is expiring in 5 months and Indonesia, one of our layovers, only allows people with passports valid at least 6 months. We are one month short of the rule. While the husband engaged the supervisor in discourse, then pleaded, then explained again, I remained silently watching them. It was taking too long, but I remained patient. The supervisor had said unequivocally that no way were we going to be allowed to enter Indonesia with his passport. He gave us options, but he was adamant that we stayed in the city and apply for an emergency passport extension in the morning when the offices open. I was not having any of this.

I finally cut my silence and told the guy, just get me to Asia and I'll take care of the rest of the trip. He was not budging. I managed to get my way, but I had to sign a waiver form. Honestly I don't know what I signed, I did not read it. The supervisor of China Airlines said it's a waiver saying we are staying in Taipei and not going to Denpasar. Again I told him to take me to Asia and I'll find my way to Dhaka. Let me worry about this. Just let me get on that plane.

Since we were in the aiport early, we managed to find out that our connecting flight from Denpasar (Indonesia) to Kuala Lumpur which is orinally scheduled for December 18 was rescheduled for December 17! How could we catch that connecting flight when we were flying over the Pacific at that time? While at the airport, we managed to reschedule this part of the trip to December 20, which gave us plenty of room to figure out how to solve our problem with the passport.

Thankfully, China Airlines had great seats for us. Just the two of us with plenty of leg room and within a spit distance to the bathroom.

We arrived in Taipei (+ 1 day) at 6 am. Immediately, we rushed to the China Airlines Customer Service Counter. A charming lady told us that the 6 months validity in passport is Indonesian rule not the airlines ruling (we were unsure about this) and that she canceled our connecting flight that day to Denspasar. It seems that we have to stay in Taipei for the day. I told her that our plan is to go to the US embassy in Taipei, get an emergency extension then fly out the next day. The kind lady was not willing to book us for the flight the following day; she wants to see the passport extension first. In a display of going beyond the call of duty, the lady then wrote the US embassy address in Chinese so that we could give the paper to the taxi driver - there's no confusion, no wrong destination.

We stored the luggage at the airport for a day.

From the airport, we took the bus to the city. The airport is about one hour drive from Taipei city. The bus stop that we took was the domestic airport and from there it was about 15 minutes taxi ride to the embassy.

The employees at the embassy were very kind and accommodating. We arrived there about 9 am and after completing paperwork and paying a small fee, we were told to return at 11 am for the passport extension. Knowing now that we have solved our passport problem, we needed wifi to book a hotel for the night.

Across the street from the embassy was a small family mart, that is a convenience store like 7-11, except that it sold more food than anything else. Like a deli, it has freezers for prepackaged meals, mostly noodle soups. I chose one and asked the kind lady to heat it for me, while the husband the ever adventurous eater opted to buy this foreign looking soup -piping hot on a hot stove- which needed to be eaten with foreign looking skewered somethings. His choice garnered a raised eye brow from the store clerk, and with her little English managed to say, "Are you sure?"
Stubborn and impetuous when it comes to food, he said yes and later on found how that the soup was indeed dangerously hot. I did not try it at all. 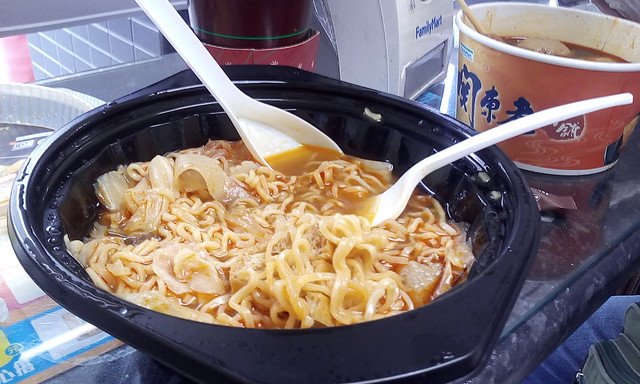 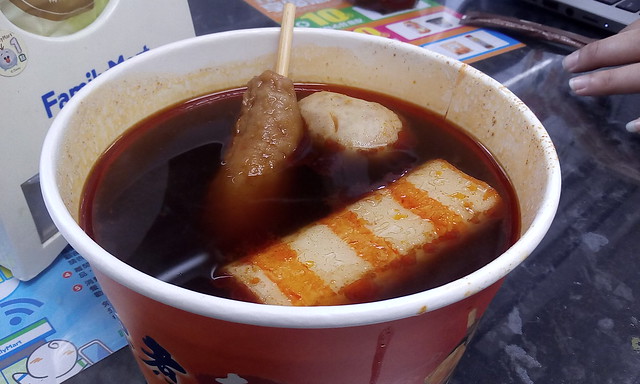 At the same time as we were slurping our hot soup, we were scouring for a cheap hotel in the city to lay our head for the night. We found one, a good one for a good price. Needless to say we made full use of our stay in Taipei. I found the city to be haven for food lovers. The city is clean, safe, and easily accessible. We ran errands, went to Taipei 101 for some eats and shopping and we went up to the 89th floor for the observatory.

All day long we were ringing the people at Air Asia to bump up our connecting flight. We thought with the passport extension we could easily leave Taipei the next day and was hoping we could get on with our trip home. The customer service people of Air Asia has kept on telling my husband that they would call back. We told them to please see that they do, because we were stuck in Taipei.

No one called back and each time we called, it's like starting from number 1. Each time we give them our reference number, it's like no one knew what we were calling about. Don't they have Notes or Comments section where they could put notations on? We were so frustrated. Such bad customer service. It was disappointing since they were manned by Filipino people. I know. The background noise was in my language. The accent was unmistakable. The people don't follow through, they don't help. How could they offer lousy service like that and remain in business? 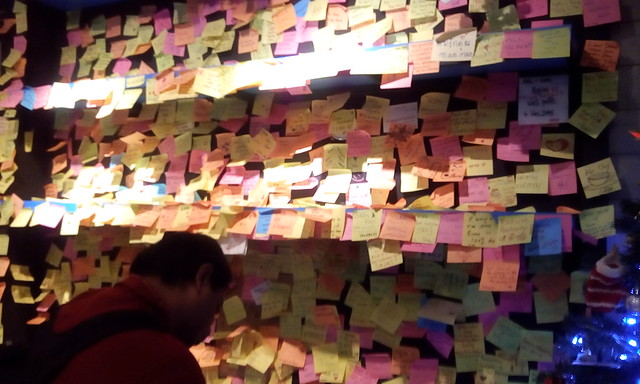 [In Kuala Lumpur airport on the return trip, we stumbled upon this coffee shop with wall full of post-it notes. I wanted to write one too, so even though I did not buy coffee, I went to write something.] 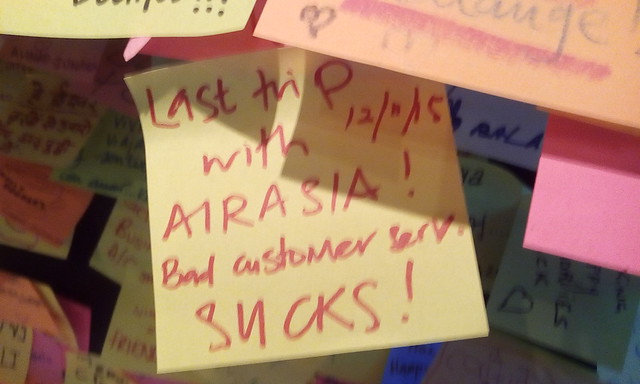 [Lo and behold, the first and only post-it I read of other travelers echoed my sentiments exactly.]

The following day, we checked out of the hotel at 6 am with the hopes of getting a flight out of Taipei. We were unsure whether we would stay in Taipei for another day, because we had a day to burn while we await our connecting flight from Indonesia to Kuala Lumpur to Dhaka. We canceled our booking for a night in Denpasar at SFO when we found out we were unable to enter Indonesia, so we had no place to stay in Bali (Denpasar). While waiting for the bus to take us to the airport, we kept toying with the idea of staying another day in Taipei versus staying in Bali. We enjoyed Taipei and what it offered the visitors.

We arrived at the airport about 8 am. At the China Airlines counter, the same kind lady we encountered the previous day was there. With her charming self, she asked how our day went and when we triumphantly showed her the husband's new passport, she immediately book us for the next flight out which was at 9 am, at the next terminal. I rushed to the storage to collect our luggage and there was a line. When it was my turn, the husband and an employee of China Airlines were at my side. The employee was to take us to the next terminal and make sure we get on the plane. This is what I call customer service!

We arrived in Bali (Denpasar), got wifi in the airport and booked a hotel, which fortunately was in the center of the touristy area of Kuta. Nice people, great hotel, across from a mall, free breakfast. Went to the beach, had two massages in a span of 24 hours.

From here forward the trip went through beautifully. Our stop in Kuala Lumpur was short but long enough for a meal. 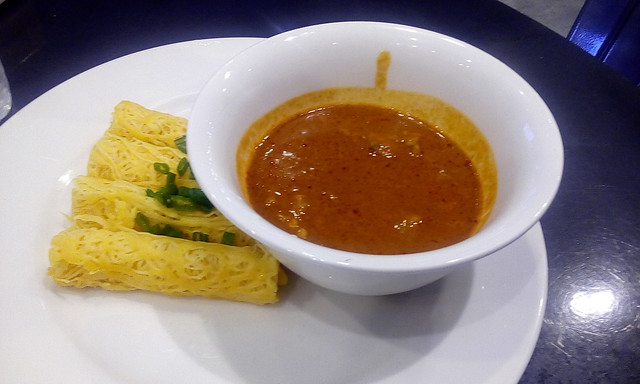 Crepes made of noodles with chicken curry, my meal. 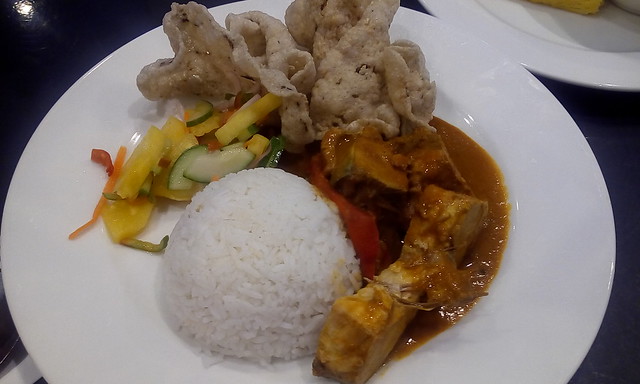 Curry with papadum and rice.

We landed in Bangladesh late in the night and at the customs my husband, the Bangladeshi, was kept on hold. Ironic, I got through just fine again. Him, the native son, no. The reason? The people at the airport had not seen an extension passport before this and had no clue what to make of it. To make a long story short, we waited until his passport went the rounds of the offices in the aiport and the guy manning the baggage carousel went looking for us because our luggage were the last ones in the carousel. Eventually, everyone had a good laugh and we went our merry way.

Lesson of the trip: Always make sure your passport is valid at least 6 months! This was a very costly lesson, physically, emotionally and mostly financially.

Now for some photos. 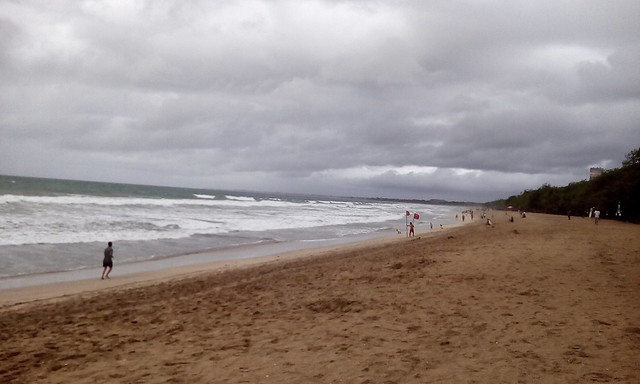 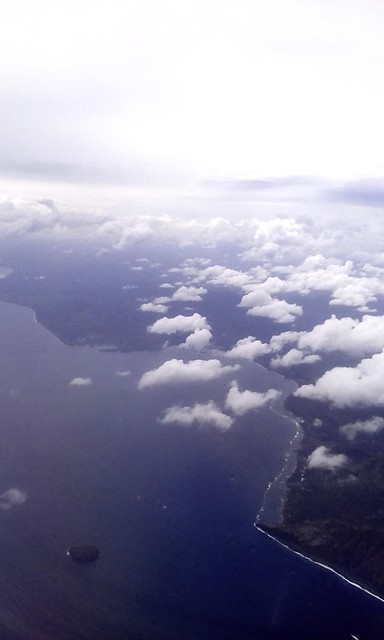 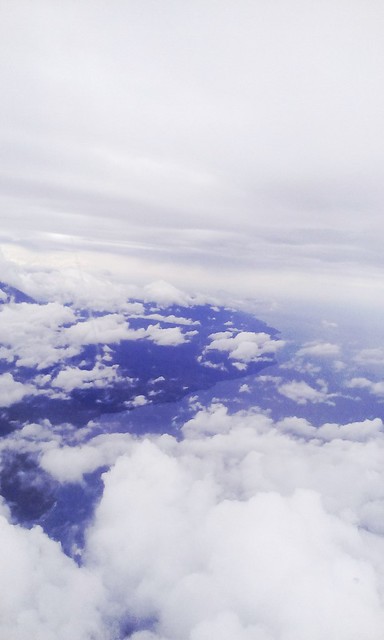 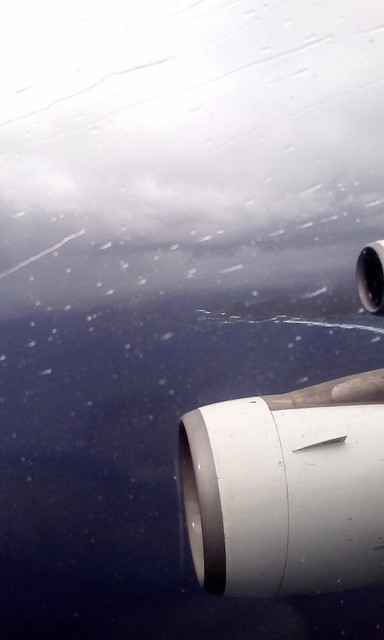 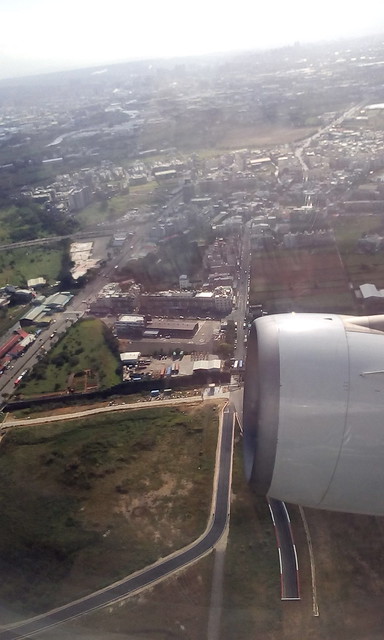