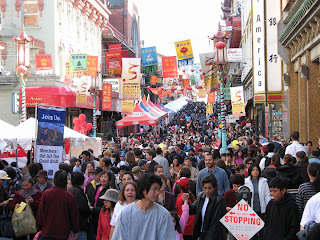 On March 10, San Francisco Chinatown celebrated the start of the Year of the Pig with a street fair. Crowded does not seem to cover it. Grant Avenue, Chinatown's main artery, was closed to traffic. 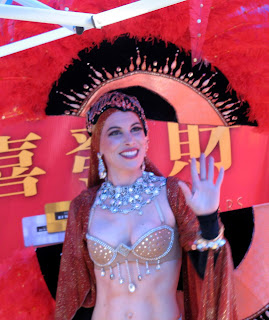 One of the booths in attendance was one from Harrah's Casino/Reno. They sent a showgirl who was there to take pictures with the guys. There was a line for the picture taking, I did not go. Another stop worth mentioning was a made-up stage where a male emcee was acting like Ryan Seacrest and asking these poeple to sing via karaoke (alll in Chinese language). One middle aged lady came to the stage, answered questions, then started to sing. On the first two bars of the song, we knew even if we dont speak Chinese, that she was out of tune. Everyone heckled her. That was fun. I mean, everyone was laughing, Chinese and nonChinese alike. 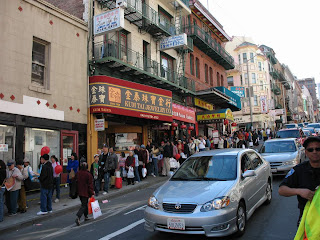 There were a lot of freebies around. But one needed to be patient to stay in line for a very long time. This one for McD give-aways had the longest line. This is just a portion of that line. 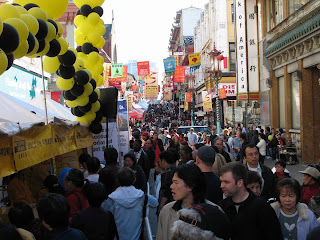 While the atmosphere was festive, I was a bit disappointed for the lack of street food/food booth. I guess the fact that the restaurants were all open had something to do with that.