FACE BEHIND THE BLOG 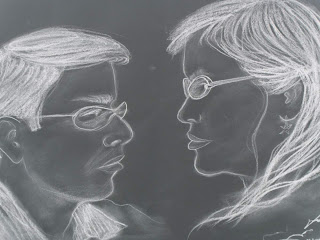 
I know it is quite uncommon for photobloggers to do memes/to get tagged, but I was…by Geri, who was the reason I am blogging or knew what blog was all about. So I am doing this meme.

Short history, I was googling “Gabby Concepcion” of all people one day after I heard that he was/is working as a real-estate agent somewhere in this part of California. One search entry that I first clicked was Geri’s blog. But I did not find anything about it, so I commented about how I got to her blog. Apparently she wrote about him in her earlier blog. I got mesmerized by Geri’s writing, so to the point. I found myself checking in on her blog daily and eventually decided to get one for myself. My first blog was called AS I WAS SAYING powered by Friendster. I had three readers, Maan, Rose, and Treu and Geri linked me. It was difficult to maintain a blog so I closed shop. Because I had a growing number of photos in my cache, I thought I’d rather do a photoblog instead. Presently, I have two photoblogs and one regular blog that I hardly have time to maintain.

I am sharing a sketch of me and my husband here, in this meme called THE FACE BEHIND THE BLOG. As you can read that this blog is a collection of photos taken by me and my significant other; it is only fitting to include him in this post.

I love cool summers and mild winters, nippy autumn days and spring flowers, Barry Bonds and the Giants, my regular tv shows that come every fall. I love walking under eucalyptus trees and hearing the dried leaves crack under my every step. I love long drives to nowhere; they are the best therapy for any malaise (husband just refuted this saying he does the driving). I wept (as did my husband) at the first sight of the Grand Canyon...too magnificent for words. If I could I would live in a national park. I love the giant sequioas, what stories they could tell if they could speak.

Not tagging anyone in particular, but it would be cool if others would do this as well.

*we paid $10 in Baja California to an ambulant sketch "artist" to do this. he showed us terrific sketches and we thought it would be our total likeness. well....some souvenir it is.
Labels: misc