The Ruins of St. Paul Church 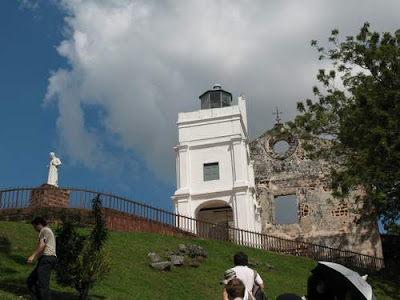 Climbing up to the hill where St. Paul is located.

This church was originally a small chapel built by a Portuguese captain Duarto Coelho in 1521 and called "Nosa Senhora - Our Lady of the Hill". The chapel was handed over to the "Society of Jesus" in 1548 and enlarged in 1556 with the addition of a second storey renamed "Anunciation". A tower was added in 1950.

When the Dutch took over Melaka from Portuguese, they changed the name to St. Paul's Church and used it for 112 years until their own church, Christ the Church (the red church I featured previously) was completed in 1753.

St. Paul's Church lost its tower when the British took over but had one new feature added to it - the lighthouse at the front. The British however did not use the church for worship, but used it instead for storage of gunpowder. They also erected a tall flagpole and renamed the hill on which the church is sited to Flagstaff Hill (Bukit Bendera). The name, however, did not last. The flagpole was taken down and the church abandoned 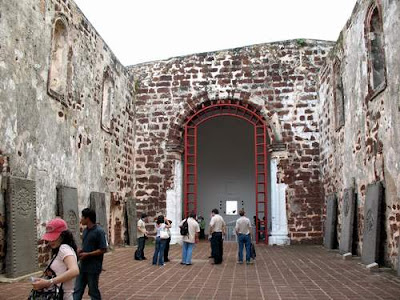 Old tombstones line the sides of the ruins.
Old tombstones inside the ruins bear silent testimony to the final resting place of several Dutch and Portuguese nationals. 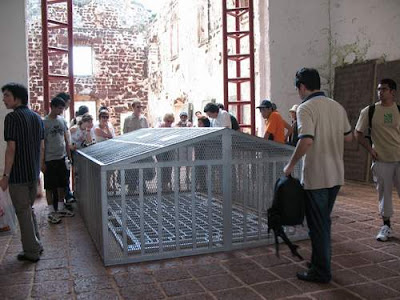 The renowned Spanish-born Jesuit missionary, St. Francis Xavier was a regular visitor to the church from 1545 to 1552 and when he died his body was interred here for nine months before being exhumed and taken to his final resting place in Goa, India. A statue of St. Francis was built in 1952 to commemorate his passing and internment here.