Las Ramblas is a pedestrian thoroughfare spanning the length of 1.2 km starting in the north at Placa Catalunya (said to be the center of Barcelona) and terminating in the south at Port Vell (by the Statue of Columbus and where the cruise lines are docked). On each side of the pedestrianized Las Ramblas Blvd are two narrow one-way traffic roads.

Las Ramblas is a shopping, dining, people watching paradise in the heart of the city. Attractions include live perfomances, human statue , artists ready to draw your portrait or caricature, artists at work, souvenir shops and lots of restaurants boasting of their famous tapas and American fast food chains - I spotted McDonalds (menu is different), Subway, Burger King (in Madrid I saw someone downing a burger with beer inside the restaurant, so I don't know if they have beer on the menu), and Starbucks. I know of one who have stayed in Barcelona at the same time as us and went to McDonalds for breakfast the whole time and complained that they don't have the same breakfast menu. Cannot confirm this because I only glanced at the menu and how very limited it was when my thirst asked for a sweet tea from Mickey D.

Accommodations along the Las Ramblas are aplenty in the form of hotels, hostels and apartments. Although newcomers/visitors are often warned that you cannot get sleep when you stay along this bustling boulevard. Who needs sleep when there's plenty to do 24-7 in this place?

Shopping along the Las Ramblas can be a bit pricey. It is after all a touristy place, so expect to pay higher price. If you are staying for a few days and need some necessities, I suggest that you go to grocery stores off the boulevard and you'll stretch your euros further. Just across the Placa Catalunya for example is Cortes Ingles which is a mall and was suggested by writings online that it's much cheaper there. I did not go there, thinking it was a mall. I wasn't a mall rat to begin with and I have no intention of spending any time at all in a mall while in Barcelona. But I did shop for pasalubongs (gifts) at a grocery store near where I stayed and there was 2 to 3 euros difference in the pricing.

It is accessible via the metro system. Three stations service Las Ramblas (Catalunya in the north, Liceu midway, and Drassanes in the south). So easy to reach.

From my readings for this post I learned that Las Ramblas has a seedy and nonseedy side. Apparently the south side, near the port, becomes some kind of a red light district at night time. I have been to the south side at night three times and never saw any prostitutes, or I just can't tell which is which :)

Most travel writings on Las Ramblas warn people of pickpockets and scam artists. My take itt's not just in Las Ramblas that we should be careful of. Pickpockets and scam artists are every where in the world. They go where people, tourists or locals alike, congregate. It's up to the traveler to be aware of his surroundings, his wallet at all time. It's just a matter of common sense. I think Las Ramblas gets a lot of plaque for this, but it shouldn't be. We weren't victimized in Las Ramblas, although a bunch of kids try to surround my husband who was carrying a backpack inside the train. My husband just said in a loud voice, What are you doing? There is nothing in there but sweaters, you wanna see? 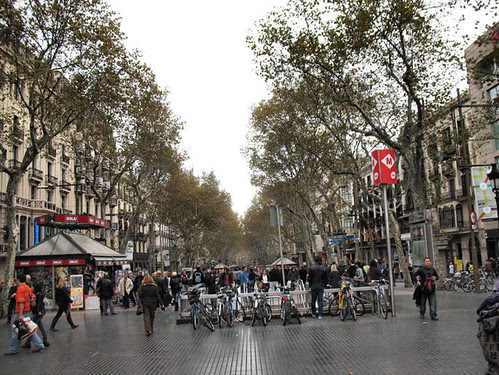 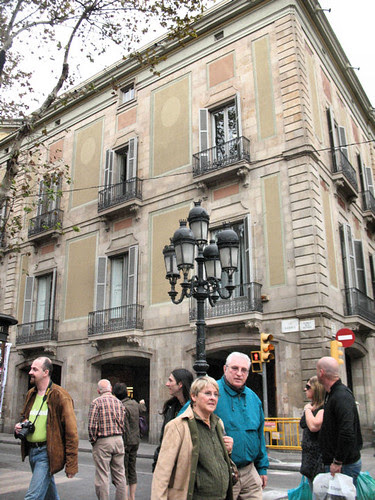 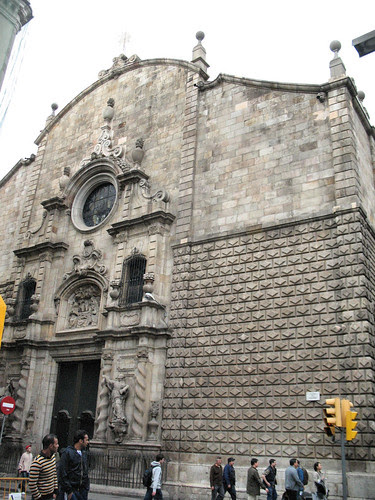 There's a church, who's name I did not get. 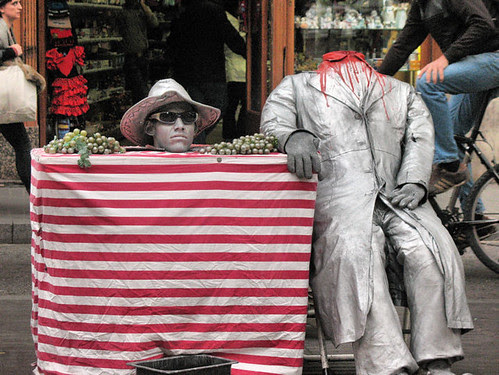 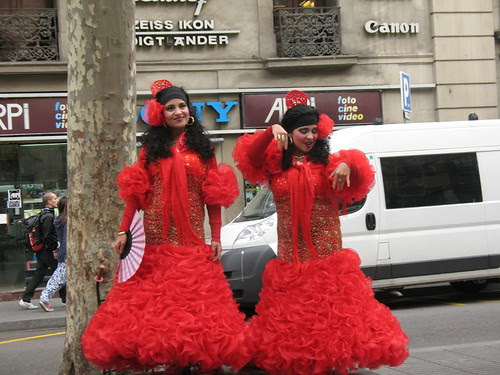 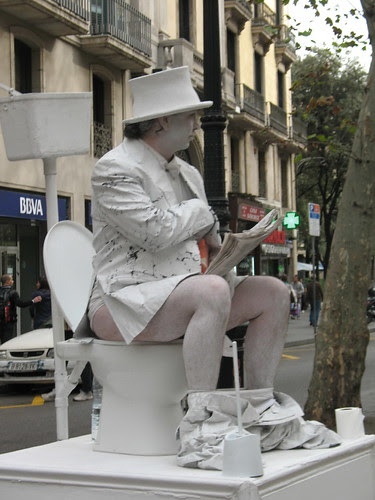