After seeing the elaborate Passion facade, I was not prepared for what awaited me inside. Sure I was aware that the church wasn't finished. The cranes attest to the fact that construction is on-going. However, I did not equate unfinished to incomplete. Somehow I was expecting marble floors of high quality, pews made from the finest trees, and altar that would knock the socks out of everybody. Inside, there wasn't any of that. There were no floors of marble or tiles or anything, there was nothing but construction zone. Needless to say I was a bit disappointed.

However, after getting over my initial disappointment I focused on looking up and seeing what has been completed so far. My disappointment faded away and I was engrossed with all the details I could find. I only wish that I would be able to see the completed project someday. 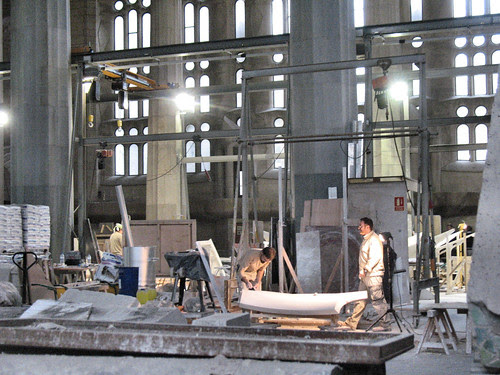 Construction is going on, the interior is nothing but a construction zone. 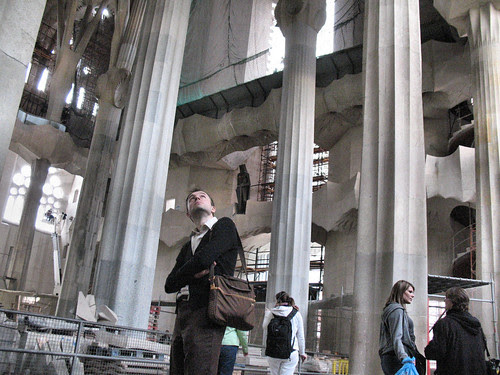 Fellow visitors taking in the experience. 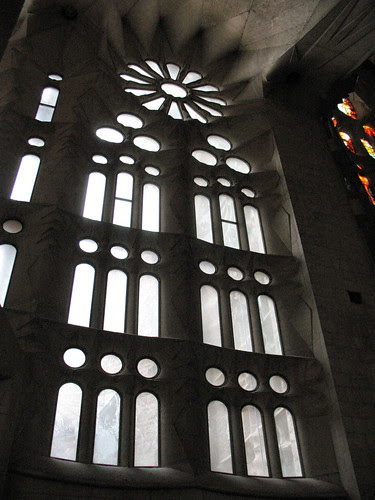 I wonder if this is all going to have stained glass later on. 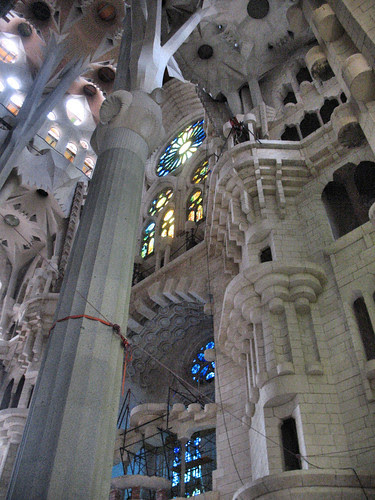 Look up, it pays to crane your neck. 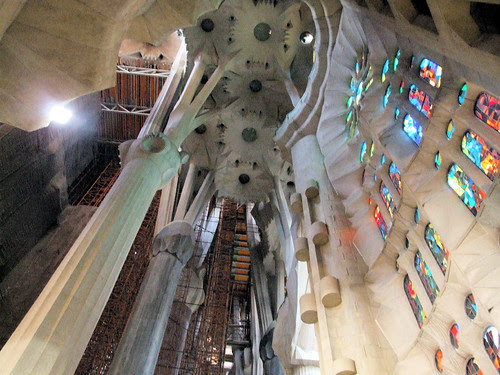 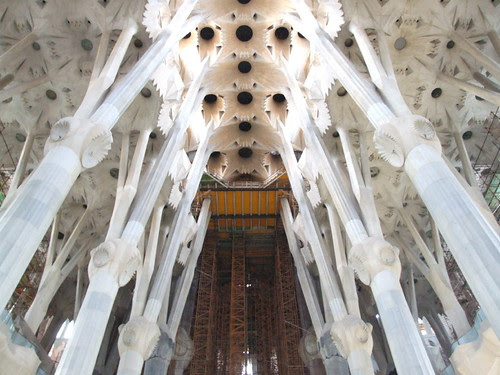 Gaudi has integrated organic, natural inspirations to his design with tree like pillars.

Some info from wiki about the interiors:

The church plan is that of a Latin cross with five aisles. The central nave vaults reach 45 meters while the side nave vaults reach 30 meters. The transept has 3 aisles. The columns are on a 7.5 meter grid however the columns of the apse, resting on del Villar's foundation, do not adhere to the grid, requiring a section of columns of the ambulatory to transition to the grid thus creating a horseshoe pattern to the layout of those columns. The crossing rests on the four central columns of porphyry supporting a great hyperboloid surrounded by two rings of 12 hyperboloids (currently under construction). The central vault reaches 60 meters. The apse will be capped by a hyperboloid vault reaching 75 meters. Gaudi intended that a visitor standing at the main entrance be able to see the vaults of the nave, crossing, and apse, thus the graduated increase in vault loftiness.
The columns of the interior are a unique Gaudi design. Besides branching to support their load, their ever-changing surfaces are the result of the intersection of various geometric forms. The simplest example is that of a square base evolving into an octagon as the column rises, then a 16-sided form, and eventually to a circle. This effect is the result of a three-dimensional intersection of helicoidal columns (for example a square cross-section column twisting clockwise and a similar one twisting counter-clockwise).