The taxi that we hired actually was not just for the ride. He doubled as a tour guide. And the taxi fare actually was a fee for the taxi tour. So when we finished with Mother Mary's House, he took uos to the ancient ruins of Ephesus. There were two entrances/exits. He took us to one and instructed us where to exit and he would meet us there in an hour. Yes he gave us an hour to look around. 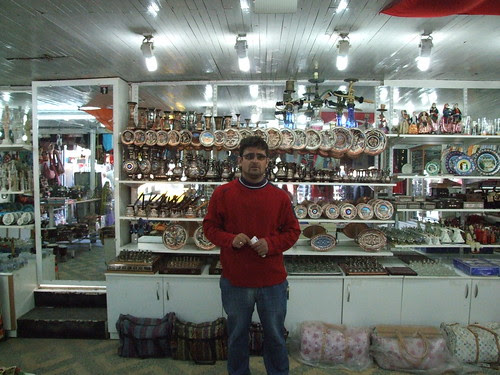 But first just outside the entry to the ruins shops line the street. We took this opportunity to do a little souvenir shopping. I was too busy that the only shot we had inside the store was this shot of the shopkeeper courtesy of my husband. You know that once I got inside the store and started browsing the merchandise there is no way I could remember that first and foremost I was a blogger, right?

Anyway, we took home with us some little souvenirs, knick knacks with evil eye designs for family, friends, and co-workers. I too found one bag, made of fabric with Turkish design, too difficult to resist. I can't remember how much it cost me. 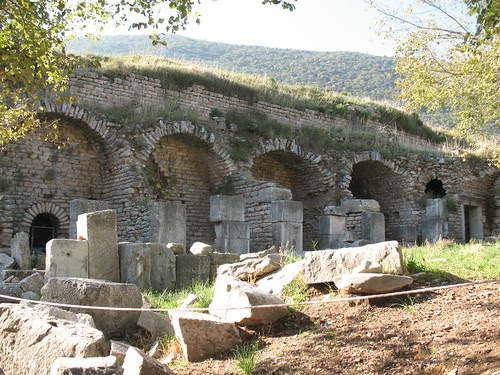 Ephesus (Ancient Greek Ἔφεσος, Turkish Efes) was an ancient Greek city, and later a major Roman city, on the west coast of Asia Minor, near present-day Selçuk, Izmir Province, Turkey. It was one of the twelve cities of the Ionian League during the Classical Greek era. In the Roman period, it was for many years the second largest city of the Roman Empire; ranking behind Rome, the empire's capital.[1][2] Ephesus had a population of more than 250,000 in the 1st century BC, which also made it the second largest city in the world.[2]

The city was famed for the Temple of Artemis (completed around 550 BC), one of the Seven Wonders of the Ancient World. The temple was destroyed in 401 AD by a mob led by St. John Chrysostom.[3] Emperor Constantine I rebuilt much of the city and erected new public baths. The town was again partially destroyed by an earthquake in 614 AD. The city's importance as a commercial center declined as the harbor was slowly silted up by the Cayster River (Küçük Menderes).

Ephesus was one of the seven churches of Asia that are cited in the Book of Revelation.[4] The Gospel of John may have been written here.[5] It is also the site of a large gladiators' graveyard.

Today's archaeological site lies 3 kilometers southwest of the town of Selçuk, in the Selçuk district of İzmir Province, Turkey. The ruins of Ephesus are a favorite international and local tourist attraction, partly owing to their easy access from Adnan Menderes Airport and via the port of Kuşadası.[source] 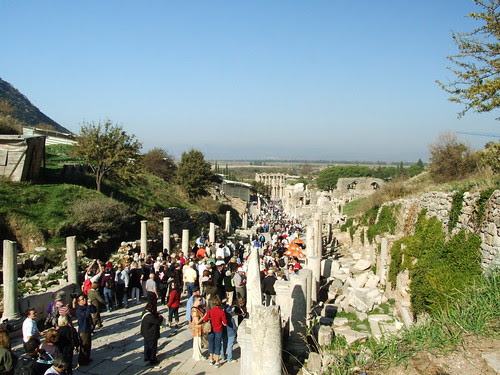 This is CURETES STREET, filled with tourists on that beautiful 70-degree day. There is a rise in the street offering a pleasant view of the Library of Celsus. 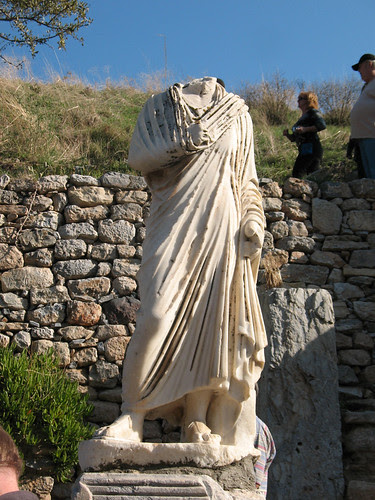 Along Curetes Street is a headless statue that was erected in honor of a woman doctor who did great service to her country. It belongs to the Byzantine Period.

Personal Note: I had no knowledge of Ephesus before I signed up for the trip and whatever little research I made in connection with the trip did not prepare me for the beauty that was Ephesus. We all hear of the Acropolis and all of the great Greek ruins, but Ephesus was equally impressive. The fact that some of the ruins are accessible for visitors to enter and explore was a big plus.
Labels: Ephesus