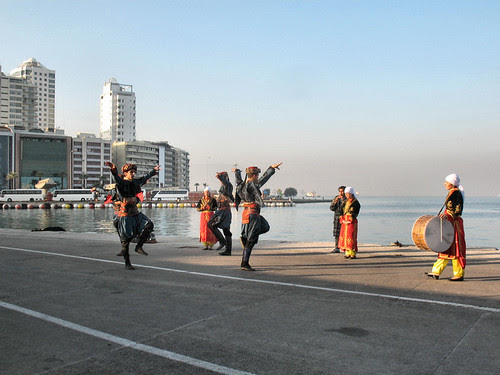 We managed to tear ourselves away from photographing the aircraft carrier to start our day of exploration of Ephesus. While we were up on the deck checking out the carrier we saw quite a number of people already leaving the boat, among them were our Athens tour buddies. This would be their second time in Ephesus and Izmir so they were intent on seeing the sights of Izmir on foot. We were met by a welcome dance. I don't know exactly if that was what they were doing, but I suppose it's the equivalent of a lei when you step on Hawaiian ground. I also wondered if people get this welcome when you arrive at the airport. I guessing again that this "performance" is a collaboration with the cruise lines as part of the total package of enjoying the culture of Turkey. 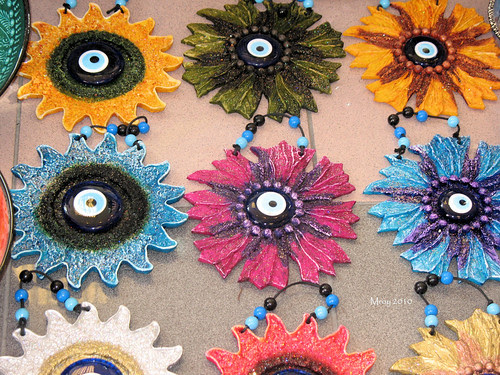 We were given a mini version of these EVIL EYE amulet, charm or whatever you call them by one of the locals who carry around a small woven basket. In Turkey evil eye trinkets and jewelry are common. They are meant to protect the wearer from evil eye. I thought that was a nice gesture. I pinned mine on my shirt and didn't remove it. I even pinned it on me whenever we would stop at the succeeding ports. It's better safe than sorry, right? I am thinking of making a pair of earrings with my trinket and my husband's share. 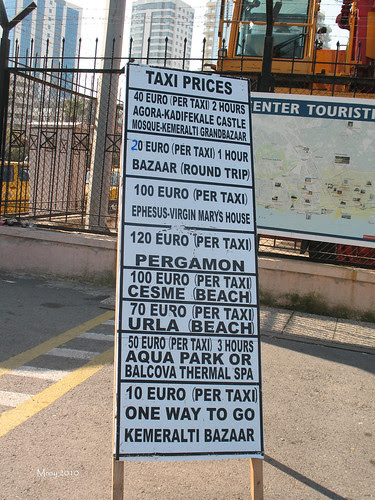 Our plan was to take public transportation. We did our research. There is a train station. But apparently not really. There is a train station and bus going to Ephesus, but they were a long walk from the port. We went back inside to speak to a tourism rep and we were advised not to go on our own. The train station they say don't go to Ephesus. And the bus is unreliable. So plan B, which was take the private taxi tour to either Ephesus or Pergamon, started to make sense. But when we saw the price - remember we are on a tight budget - we thought we'd go back to the ship and see who wants to share the taxi with us. 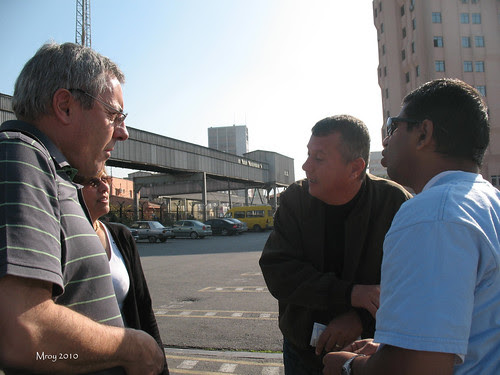 Since we were almost the last ones to leave the ship, the idea of us shouldering 100 euros for 2 -3 hours of tour of Ephesus was beginning to be a likelihood. Until a couple came out and looked lost. Mr. Congeniality - my husband the one in blue on the right - approached the couple and broached up the idea of sharing a taxi tour. We compared notes on which sites we wanted to see and voila, our list matched theirs. Now time to talk to the taxi driver. They talked I shot. 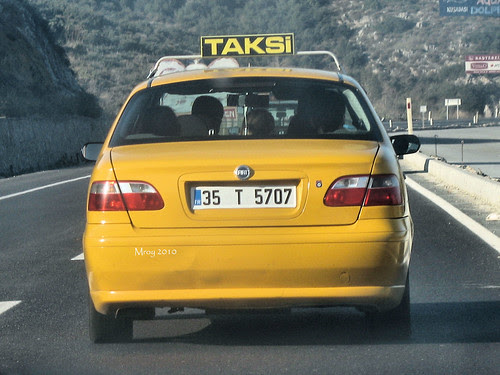 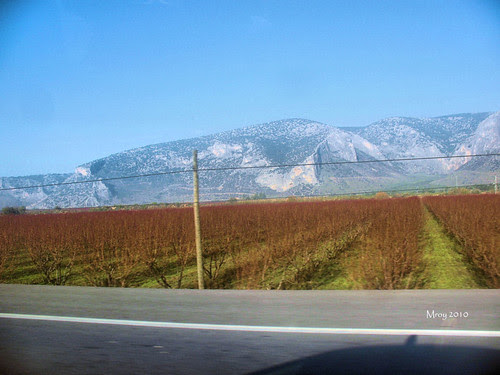 Ephesus (bible's St. Paul's Ephesians) is 80 km from Izmir. Our driver obviously a pro when it comes to doing his job was chatty and while communication was hindered by language barrier, the taxi was not quiet for long. He revved up the taxi up to 140 km (oh yeah, my heart sank to my Achilles' heel - like riding a rollercoaster ride scary) and when he noticed that I was checking out the odometer from my backseat, he tapped the steering wheel and sheepishly comments: FERRARI! You know the taxi can handle that speed. And nervous laughter can be heard from three passengers. Whenever he sighted the familiar blue car parked along the roadside (tourist police car), he would wisely cruise within legal limits. The police or Jandarma cars are posted on regular intervals along the length of the highway from Izmir to Ephesus in order to safeguard the tourists. I felt really safe when we traveled in this part of Turkey.

The above photo is what I snapped while we were cruising the countryside.
Labels: Izmir/Ephesus