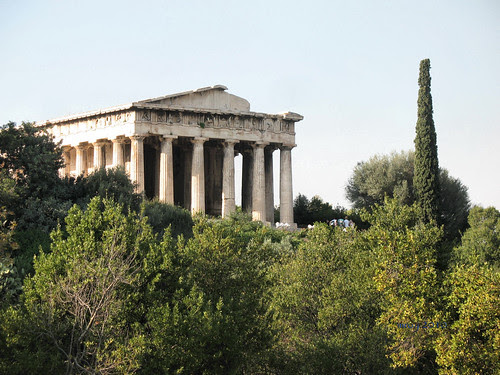 The Temple of Hephaestus is the best preserved ancient Greek temple. It is located on the north west side of the Ancient Agora on top of the Agoraios Kolonos Hill. From the 7th century until 1834, it served as the Greek Orthodox church of St. George Akamates. 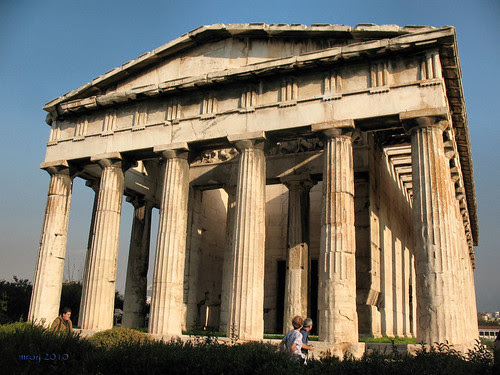 Hephaestus is the Greek god of fire and volcanoes. He is also god of all craftsmen and smiths. He is the equivalent of the Roman god Vulcan.
Although built in 449 BC, it is almost completely intact even today. The columns, roof and pediments are nearly unscathed. As it was believed that Theseus (a hero and king of Athens) was buried in the temple, it is also known as Theseion. However, the remains of Theseus were found in some other part near Acropolis. It is also believed that the temple was dedicated to Theseus. Numerous smiths and craftsmen worked in the temple's vicinity. Therefore, Hephaestus, the god of craftsmen and Athena Ergane, goddess of pottery and arts were worshiped here.The temple is believed to be designed by the architect of the Parthenon (temple of Athena). It is a peripteral temple having Doric style of architecture. The east and west sides of the temple are shorter, having six columns; whereas, the north and south sides are longer, having 13 columns (the columns in the corner are counted twice). Marble is extensively used in the temple. Its sculptures are made of Parian marble. [buzzledotcom]

It is a pretty impressive temple; for one this age, she looks extremely wonderful. The temple can give Parthenon a run for her money, looks wise. She has aged gracefully. What a dame.