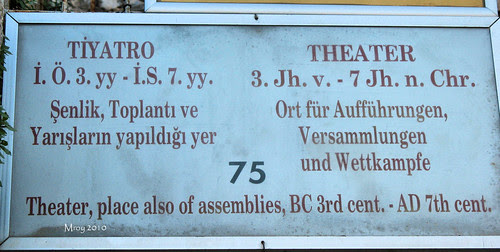 We finally got near the end of our tour, the Great Theatre was the last one we visited. 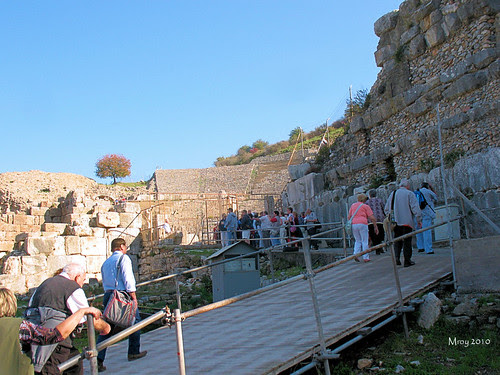 The ramp is the way to enter the theatre. 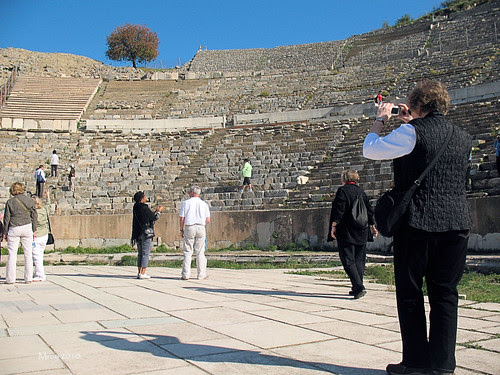 From the "stage" to the seats, nothing is prohibited to tourists. I particularly like that sole tree on the top. 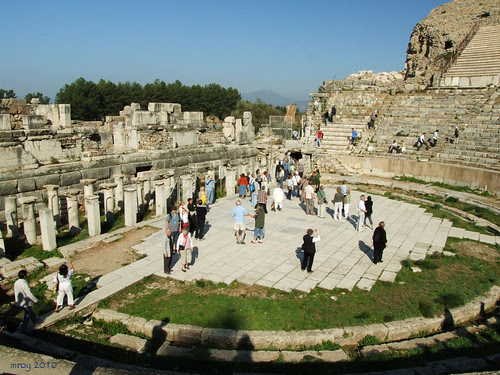 Here is the stage from one of the upper seats. 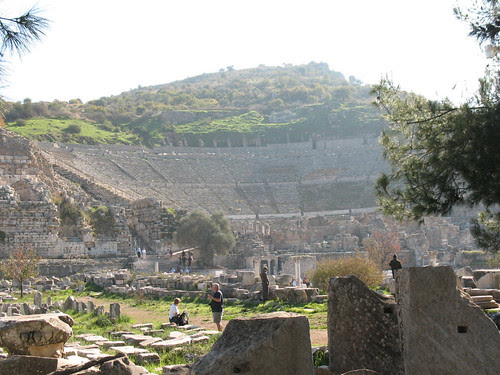 And this is the theatre from the street view as we were nearing the south gate, where we will be exiting.

This is the most magnificent structure in Ephesus ancient city. The Great Theatre is located on the slope of Panayir Hill, opposite the Harbor Street, and easily seen when entering from the south entrance to Ephesus. It was first constructed in the Hellenistic Period, in the third century BC during the reign of Lysimachos, but then during the Roman Period, it was enlarged and formed its current style that is seen today.

It is the largest in Anatolia and has the capacity of 25,000 seats. The cavea has sixty six rows of seats, divided by two diazoma (walkway between seats) into three horizontal sections. There are three sections of seats. In the lower section, Marble pieces, used for restoration, and the Emperor's Box were found. The seats with backs ,made of marble, were reserved for important people. The audience entered from the upper cavea.

The stage building is three-storied and 18 meters high. The facade facing the audience was ornamented with relieves, columns with niches, windows and statues. There are five doors opening to the orchestra area, the middle one of which is wider than the rest. This enhanced the appearance of the stage, giving it a bigger, monumental look.

The theatre was used not only for concerts and plays, but also for religious, political and philosophical discussions and for gladiator and animal fights. [source]

In addition to the last paragraph, I read that in the early years of Christianity one of the big combats between the followers of Artemis and of Christ had taken place in this theatre, and as a result, St. Paul was put into prison on the hill named after him, and he was then obliged to leave Ephesus.
Labels: Ephesus