We arrived at the centerpiece of this ancient city, the Library of Celsus. This was the reason why I wanted to see Ephesus because I wanted to see this in person. Whatever is left of it, the facade is truly stunning. In the ancient time, they said that the leading libraries were Ephesus' Library of Celsus and Egypt's Bibliotheca Alexandrina (post coming up). While the latter has been completely destroyed and now rebuilt, the former is still standing tall in her glory. 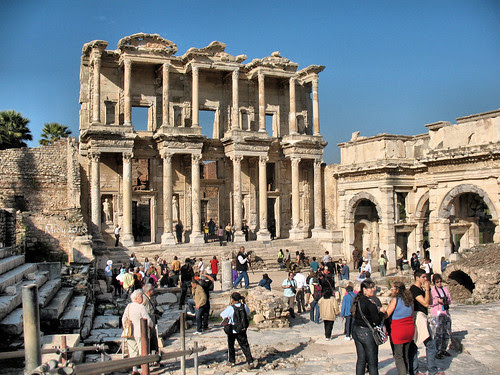 In the land that is now Turkey, a wide marble road slopes down to one of the largest libraries of the ancient world. Between 12,000 and 15,000 scrolls were housed in the grand Library of Celsus in the Roman city, Ephesus.

Designed by the Roman architect Vitruoya, the library was built in memory of Celsus Polemeanus, who was a Roman senator, General Governor of the Province of Asia, and a great lover of books. Celsus' son, Julius Aquila, began the construction in 110 AD. The library was completed by Julius Aquila's successors in 135 AD.

Celsus was buried beneath the ground floor in a lead container inside a marble tomb. A corridor behind the north wall leads to the vault.

The Library of Celsus was remarkable not only for its size and its beauty, but also for its clever and efficient design. [source] 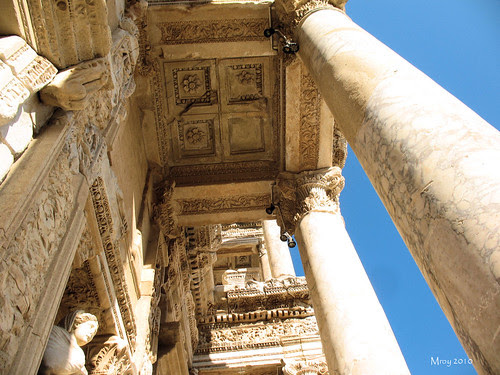 The library is another one of those ruins that you can touch, enter, and practically do with whatever you feel like. Of course I am not suggesting you do whatever you like, respect these ruins. 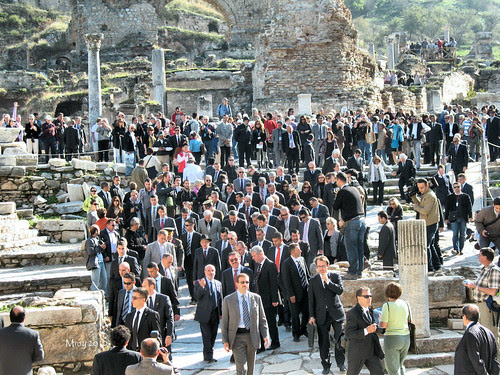 We were so busy looking at details that when I came down the stairs of the library, red flag came off my brain as I see a throng of black tied men coming my way. By the time I was a few feet away from the library, the whole place was cordoned off. I was helped out of the cordon by a paparazzi, yes, he did extend his arm and pulled me up, tiny legs and all :)

Later on we found out that the vice president of Italy was visiting. No wonder we saw inside the Mazeus and Mithriadates Gate (first pic, the arched gates on the left) that the area was a set up for what looked like a garden party. We ventured there without knowing that it's off limits, until a guy who looked like security barred us from further exploring the grounds.
Labels: Ephesus