Eating In Madrid Completes The Day

The experience wouldn't be complete without sampling what Madrid has to offer our hungry stomachs.  It didn't happen the way we planned it to be though.  On the way to the subway station from the hotel we noted a few establishments we wanted to visit, especially the CERVICERIA (brewery/bar) a few steps down from our hotel.

It was late November so it got dark quickly.  It was raining and dark and we were the only two people on the bus and we were on the top deck of a roofless bus getting soak - talk about perseverance (or stupidity).  And then we spotted a great courtyard, which we found out later on was Plaza Mayor, and decided to stop and investigate.  We saw people putting up makeshift tents for what looked like an outdoor open air market - and it was raining still.  But the people didn't seem to mind the rain as they continued to put out merchandize - little trinkets, jewelries, etc.

We bypassed the courtyard and went exploring and found eating establishments.  We ducked into this little hole in the wall with only two people inside.  It was one of those no frills places, where one goes on the counter to put in an order and the choices of bocadillos (sandwiches) are written in chalk on the board by the counter.

We selected a pulpo (pictured below) and another bocadillo.  I learned fast that sandwiches in America and in Spain are very different.  For example the one I ordered pulpo, which is octopus.  They gave me a baguette and breaded octopus slices - no condiments, no greens, which by the way is simply superb!

My husband and I cannot remember the other bocadillo we ordered here.  And somehow, I don't have a photo of it can you believe that? 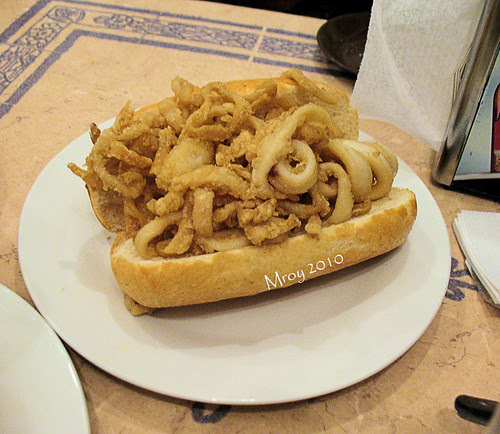 The bocadillos settled heavily on the stomach and the rain had turned into drizzle by the time we were ready to explore this area.  We went around checking out other eating establishments and shopping.  We did the most shopping here - both window shopping and actually handing our credit cards to the merchants :) 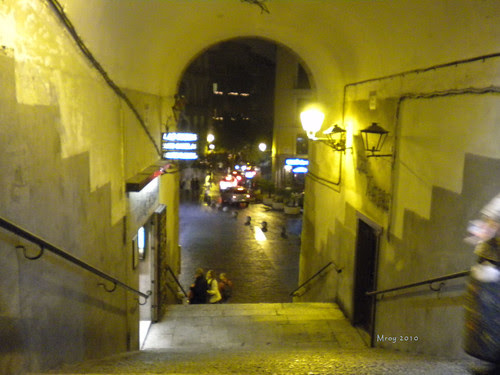 While shopping we spotted this little place that offers chocolate and churros (they all offer this combo btw) and it's the only one I wanted to sample in Spain.  It was a moving experience :D to finally enjoy the real thing. 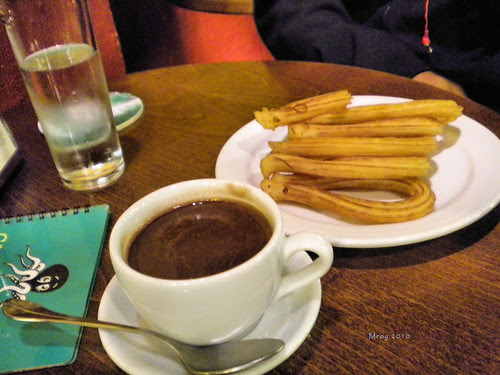 A lot of eating places here.  Some even have window displays like the one below to show tourists what their food looks like.  This reminds me of many Japanese restaurants' windows. 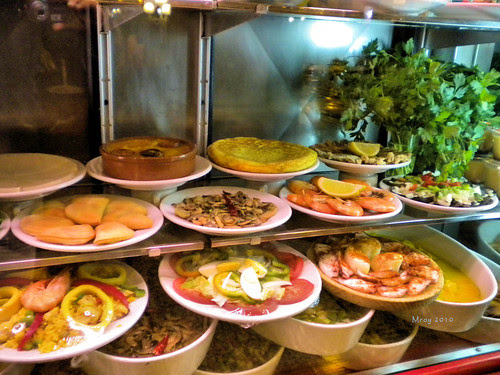 WE shopped some more after the chocolate and churros snack and I can't remember how we found our way to our hotel.  We didn't get lost.  I thank our lucky stars for guiding us thru the streets and subways of Madrid.

When we reached our subway stop, we didn't immediately go to the hotel.  The main road that traverses the little road where our hotel is located has many bars and restaurants.  We went out looking for more eats, can you believe that?  We entered one and my instincts totally kicked into "flee mode".  The people in the bar looked like they were having more than beer, and thankfully my hubs didn't argue. 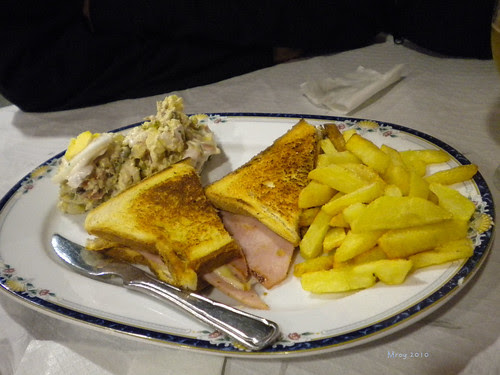 We walked the many blocks of the main road on both sides before finally deciding that it was too late to eat and we were still full.  At the corner of the main road and the street where our hotel was is a Burger King restaurant, yeah the American fastfood chain.  It was glass top to bottom so I can see the diners.  They were having burgers and beer.  Burger King serves beer in Madrid!!!!! And I almost went in.

Thankfully I wasn't feeling the burger vibe that night and within a few steps we reached/passed the cerveceria we saw earlier in the day.  Without hesitation, we went inside and settled in one of their cozy tables.  Since this place is far from the city center, most customers are locals.  The place was 3/4 full.  In the bar I saw a young mother with her infant.  She breastfed her infant in the bar - how cool is that?

We ordered a combo meal - can't remember what it's called - but it was fantastic.  Sorry folks, can never ever be a foodie blogger.  But believe me when I say it was tasty. 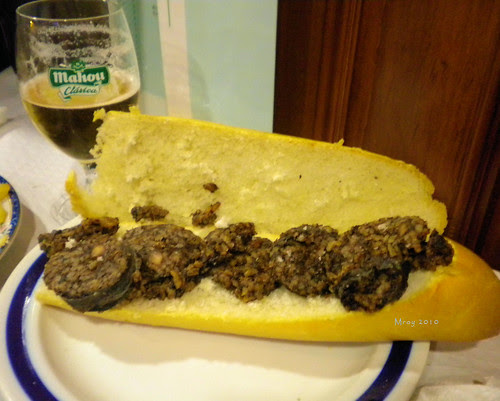 I had to have a blood sausage bocadillo.  Superb like everything else.  They also give you a free appetizer, which is a small piece of baguette with serrano ham, a very nice touch.

From the cerveceria our hotel is across the street.  We retired for the night, knowing full well that in 3 hours we would be waking up to catch that plane to Amsterdam.  Good night Madrid! 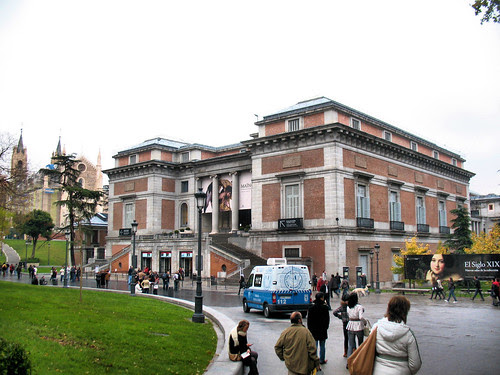 I am putting this out here because this is the Museo del Prado - which was our only must visit in Madrid, but while we found it we were unable to see it.  We were simply pressed for time.  Maybe some other time?  Crossing my fingers!
Labels: Madrid