Preface: This post begins my documentation of my September 2011 ecotourism vacation to Costa Rica. We had to fly out of Miami so we alloted a day for sightseeing in Florida/Miami.
You just missed the tram tour. There's another one in one hour. That's what we were told as we paid our entrance fee to the Shark Valley entrance - the closest one from Miami. The next one is another 1.5 hour drive away we were told. That wouldn't pan with our plans. We weren't planning on spending most of our 34 hours stop in Miami driving around. No sir. We wanted to see as much of Miami as we could before embarking on our Central American vacation. 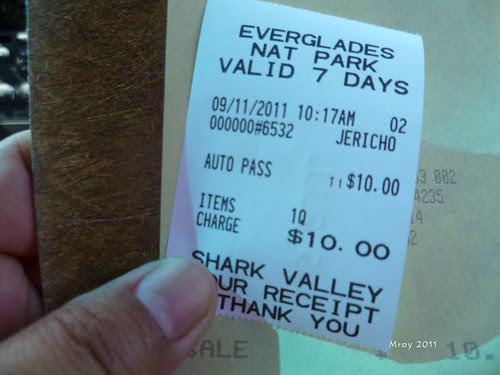 By missing the 10 am tour, we had an hour to stretch our legs, visit the loo, load up on the necessities which were readily available at the gift shop - things like bug spray and full size sunblock. You're asking why we didn't buy one at home? Post 9/11 as you know liquid items are restricted to 3 oz on carry on bags.

The hour seemed long when waiting as you all know, which gave us time to look around the parking lot and visitor center and its surroundings and photograph everything.

It was hot - as could be expected - although the humidity didn't factor into my total mood yet - just wait *grin*.

There is a canal just off the visitor center where lotus plants were growing. We spotted different fishes, one of them the "enemy" Florida gar. I could identify that one because its image was on the signage.

At some point during the wait, I had to step into shade because the sun was bearing down really hard on me. Although if you look at my pictures, I didn't look miserably hot. Yes, pictures do lie. 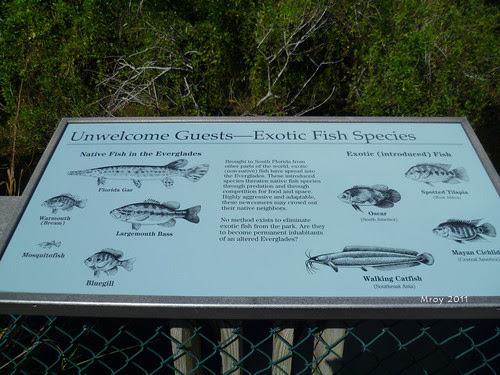 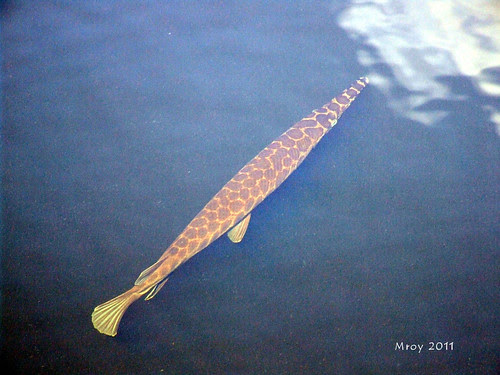 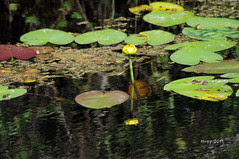 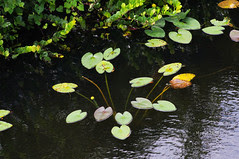 They are not the rounded platter shape, but heart shaped, which I have only seen here for the first time. 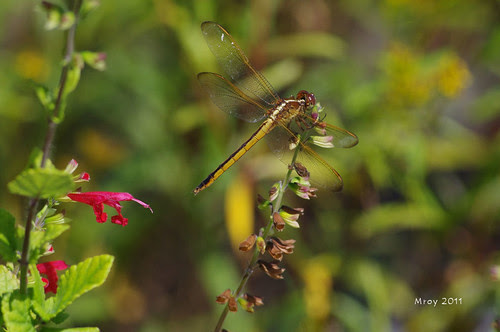 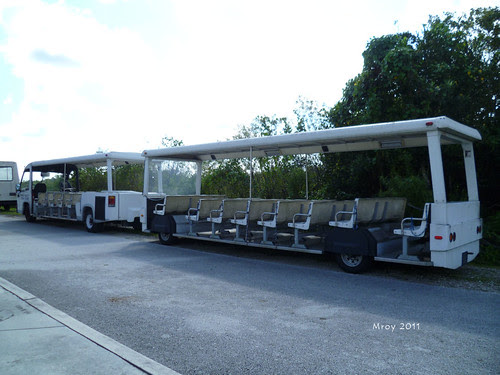 A woman named Sylvia introduced herself to us and asked us if we could sit on the benches. She proceeded to give us the background of Everglades National Park, which you can read here. Midway through her intro, the 10 am tram was inching its way back to the parking lot. I guess that was the signal for Sylvia to commence her own tour. 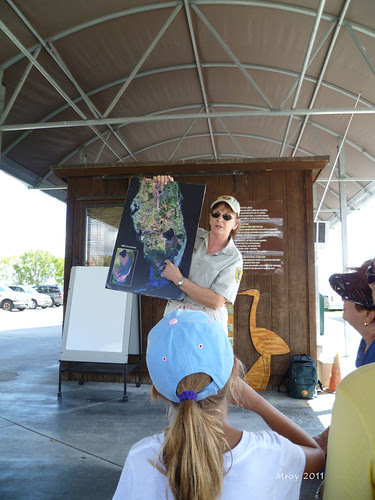 The Shark Valley Tram Road is a 15 - mile long paved loop. The slow speed of the tour gave us access to the subtle landscape, different wildlife including migratory birds and alligators. We stopped several times where Sylvia went down the tram to point out something of interest or pick up an algae to show what she's been lecturing on.

It was a peaceful ride, looking out in the vast flat landscape with bushes and shrubs and occasional trees and grasses galore. 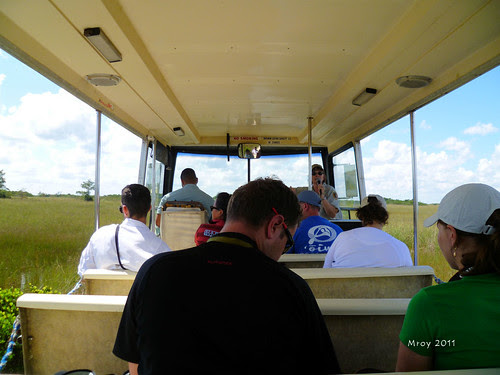 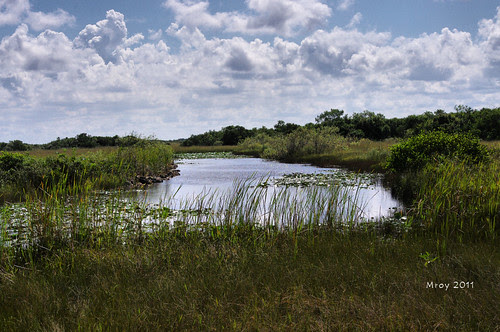 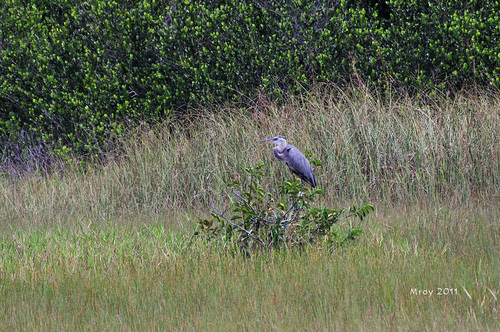 Saw anhinga for the first time. We saw plenty in Costa Rica afterwards. 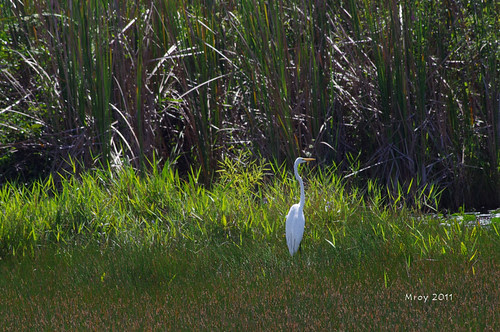 Crane? She stands out anywhere. 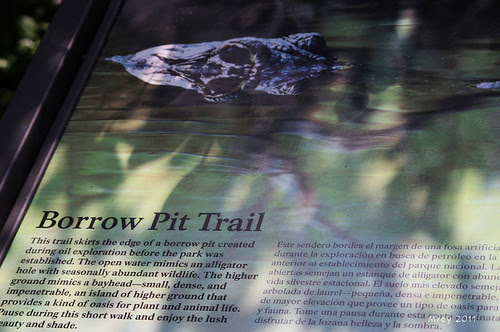 Yes the place used to be where they dug/explored for oil. 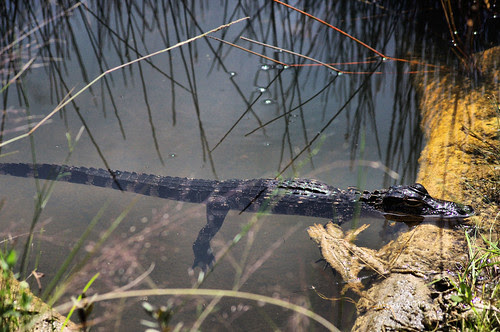 A baby gator in one of the borrow pits. 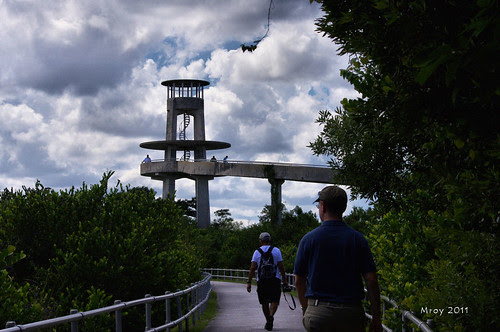 Midway through the loop, we stopped to visit the Observation Tower which is equipped with bathrooms. Lonely Planet describes this as, "Halfway along the Shark Valley trail is the 50ft-high Shark Valley Observation Tower, an ugly concrete structure that offers dramatically beautiful views of the park."
I have to disagree with Lonely Planet because I don't find this tower "ugly" per se, even though I can't say that it's a thing of beauty either. But I am one with Lonely Planet in saying the views from up there are truly dramatic. You can see for miles in a flat landscape. I saw walkers and bicyclists. We passed by many bicyclists along this road for there is a bike rental in the visitor center. I'd love to bike here, but may be around 6 am would be the ideal time to explore this massive place.
A few feet before reaching the tower we spotted an alligator blocking a walking trail. We were instructed not to go around a gator, sleeping or not, just so one can hike that trail.
The bug spray was useless as mosquitoes were having a picnic atop the observation tower, which made me cut my time up there. I wonder why I wasn't bitten on the ground where I'm closer to stagnant water? 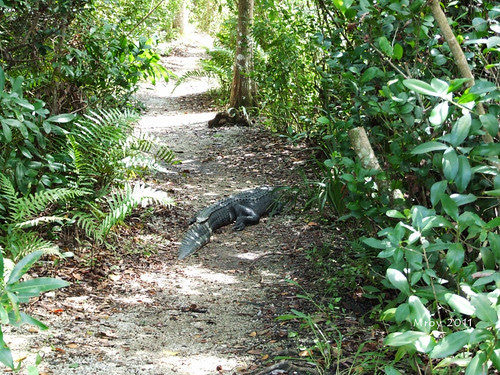 This trail is closed by a gator. 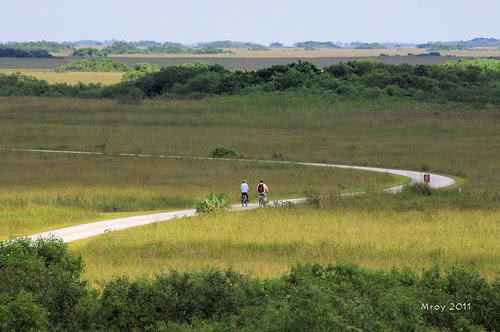 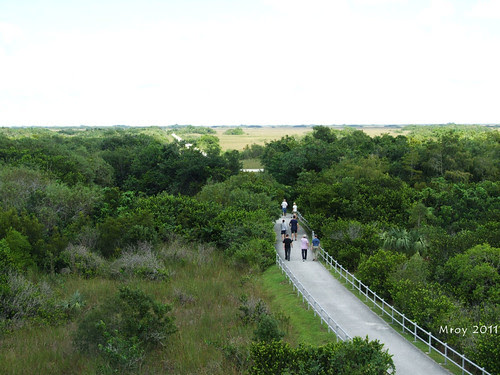 We continued with the tram tour and I was definitely thanking my lucky stars that took me here. I wasn't keen on visiting Florida. Nothing against the state, because someday I really really would love to go see the Harry Potter spot in Universal Studios. However, the heat is really a deal breaker for me, most of the times. 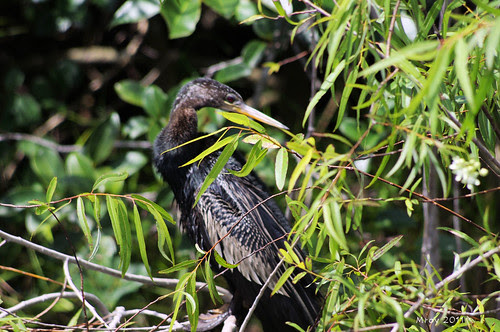 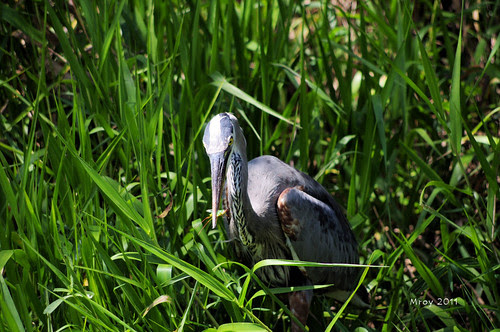 He's got lunch between his beaks, can you see? 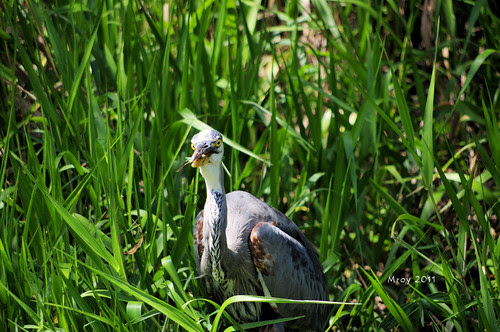 What a lovely way to start our Florida/Miami sightseeing. Next stop: find the hotel and get checked in and wash away the bug spray, sunblock and sweat off my body. 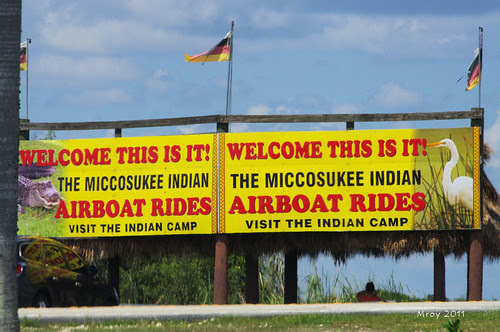 Next time btw, I'd take this airboat ride. It looks fun. It's the one you see on tv when they show the Everglades.