Close Encounter With the Three-Toed Sloth and A Jungle Walk

Following our arrival and the free cocktail, we were given our assigned room. Our group was assigned one lodge (four rooms), the closest to the reception area. A buffet lunch followed. The lodges/hotels/inns in Tortuguero offer all-inclusive packages, since there are very few restaurants in the village. Our case too is that we have to cross the canal to reach the village.

The 3-day 2-night package included the transfer/pick up from our hotel in San Jose to Tortuguero, the breakfast in El Ceibo restaurant and the luncheon on our departure day, all the meals in Pachira Lodge, and three guided activities/tours. The first one was about to commence after a brief respite from lunch.

Pachira Lodge boasts of its propinquity to the jungle, part of the national park. Just a few yards from the pool is the entry to the jungle. While the jungle/rainforest is massive and majority of it can only be accessed by boat, there is a small portion that can be explored by foot. Luckily this portion is a stone's throw away from our lodge, basically inside the lodge's backyward.

The trail was short, unfortunately, but it gave us an overview of the diverse flora and fauna found in Costa Rica. Did you know that Costa Rica has a greater biodiversity (considering its size) than Europe or North America? That it's geographical location between North and South enables both plants and animals from both continents to establish themselves there? That the diverse habitats (lakes and rivers, cloudforests and low land tropical rainforests) encourage biodiversity? That the government's ecological policy ensures the propagation of the species?

Pachira Lodge has 88 rooms and all of us went to what they term as jungle walk. It basically is a stroll under the trees with well worn paths, albeit unpaved. We were divided into 2 groups, Spanish-speaking and non-Spanish speaking. The Spanish speaking people went with Mariano - the other guide. Us poor non Spanish speakers went with Julio, the same guide who picked us up in San Jose and who conducted the narrated tour from San Jose to Tortuguero earlier in the day. 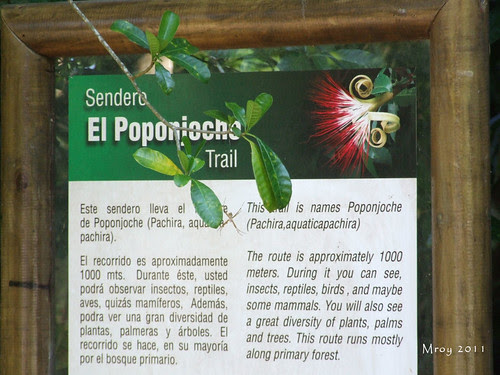 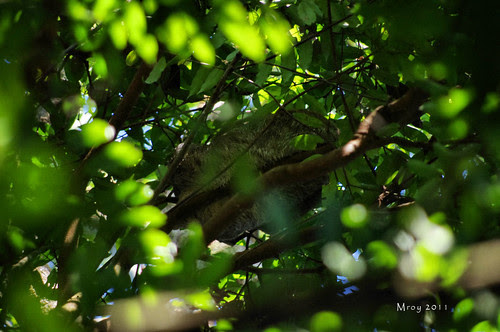 Julio spotted a sloth up in the trees where they live. Costa Rica is home to two types of sloths: 3-toed sloth which is a diurnal animal, which means it's active chiefly during the day time and the 2-toed sloth who is nocturnal and rarely seen. With the distance Julio couldn't tell. Plus, he's guessing it's a 3-toed sloth because it looks active and it's still daytime. 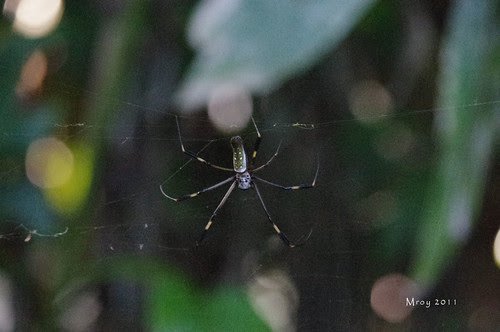 We proceded along the path and was careful of our surroundings. Out here one must really be conscious of what one's stepping into or what what we're about to destroy as we go along our way. We saw a few spiders in their webs. Julio said something about this particular spider. I wasn't listening. 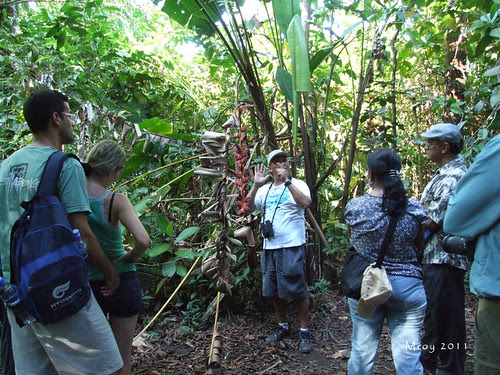 Julio explains something about the heliconia. Growing up, we call this plant BIRDS OF PARADISE. In fact my mom has a plant in our yard that blooms profusely. Does it feel like jungle to you? It was dark inside, tough to photograph anything. 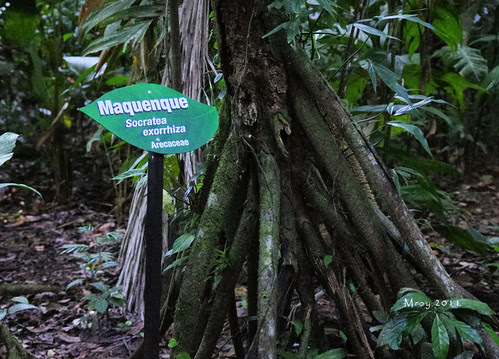 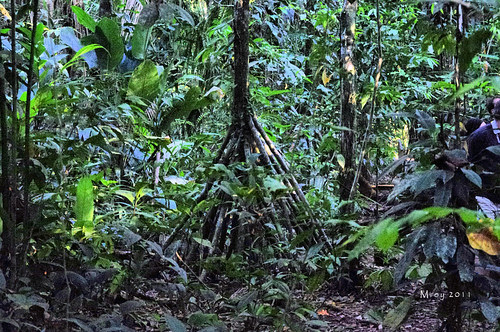 Julio called this palm the "walking tree" Read about them here. 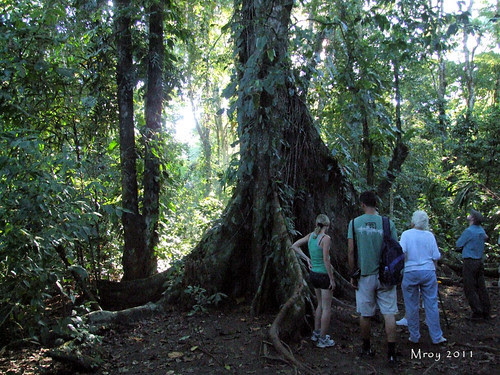 So many interesting things to see, up and down.

And then there are the epiphytes - "Epiphytes, plants which live on trees in order to reach the sunlight, also abound in these forests, adding to the water-gathering ability of the trees. The epiphytes aren't parasites; they feed off water and dust and nutrients which accumulate around their roots." 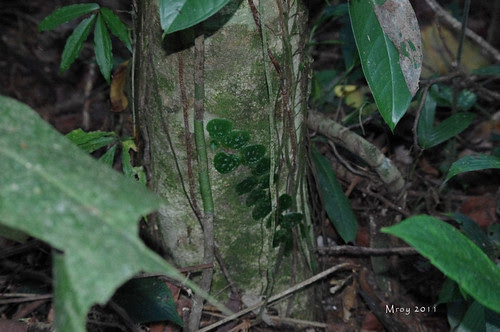 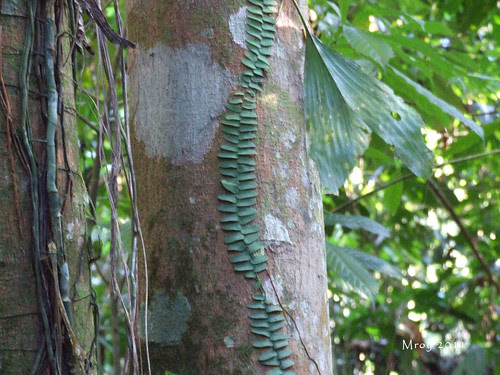 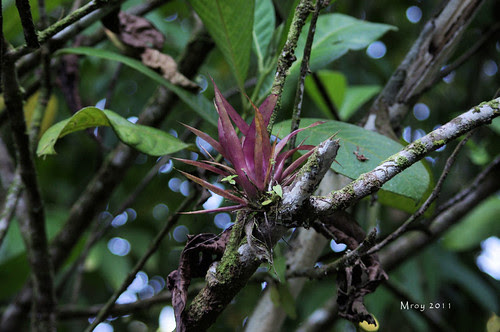 My husband and I and another couple were lagging behind because hubby was taking photos when all of a sudden he saw a sloth on the ground. Sloths come down on the ground once every 9 days or so to defecate. Excitedly we alerted the group who were a few yards away from us to come back and see what we found. Julio in all his years of guiding tours has never seen a sloth on the ground before. The slow movement of the sloth should have given me ample time to take great shot, except that under the canopy where light is scarce there was only so much I can do. It was an amazing experience. Everyone was thanking the hubby for his keen eye. 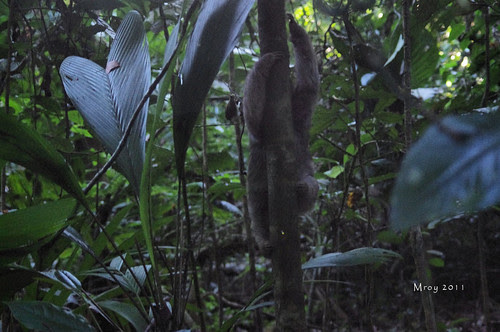 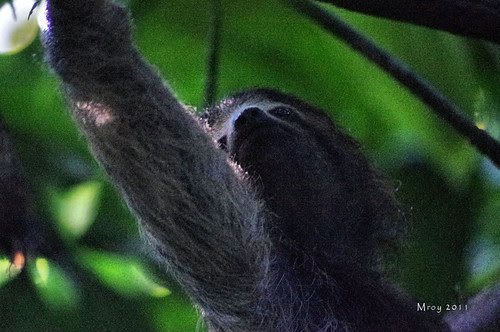 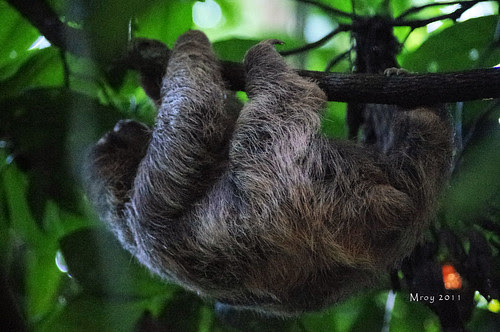 When the tour ended, we all rushed to our rooms, changed into swim wear and spent the rest of the afternoon in the pool downing cold ones. From this vantage point, we were watching the sloth just sit on top of the tree.

It was one heck of a first day in Tortuguero, a sightseeing bus ride from San Jose, a delicious breakfast stop in Guapiles, a narrated boat ride in the canals and a jungle walk punctuated with a close encounter with a sloth. Mighty fine day for a first day.
Labels: Costa Rica Tortuguero