Thirty-eight kilometers from Agra lies the old capital of the Mughal empire under Emperor Akbar. It was the next item for the day (after Taj Mahal and before the long drive to Jaipur). I thought I'd had enough architecture eye candy for the day, until I saw this place. 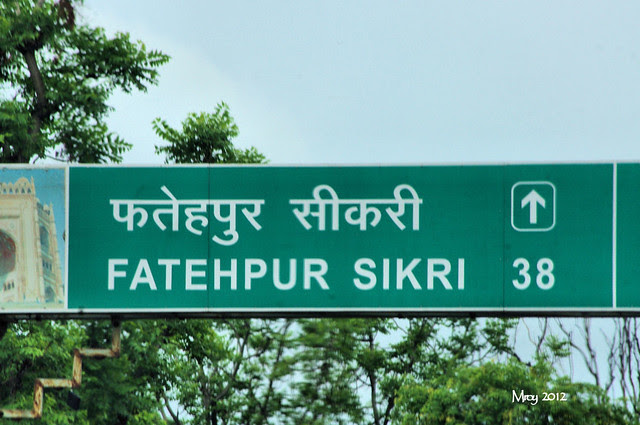 Akbar was a follower of Salim Chishti, a holy man who lived in the region of Sikri near Agra. Believing the area to be a lucky one for himself, he had a mosque constructed there for the use of the priest. Subsequently, he celebrated the victories over Chittor and Ranthambore by laying the foundation of a new walled capital, 23 miles (37 km) west of Agra in 1569, which was named Fatehpur ("town of victory") after the conquest of Gujarat in 1573 and subsequently came to be known as Fatehpur Sikri in order to distinguish it from other similarly named towns. Palaces for each of Akbar's senior queens, a huge artificial lake, and sumptuous water-filled courtyards were built there. However, the city was soon abandoned and the capital was moved to Lahore in 1585. The reason may have been that the water supply in Fatehpur Sikri was insufficient or of poor quality. Or, as some historians believe, Akbar had to attend to the northwest areas of his empire and therefore moved his capital northwest. Other sources indicate Akbar simply lost interest in the city or realised it was not militarily defensible. In 1599, Akbar shifted his capital back to Agra from where he reigned until his death. 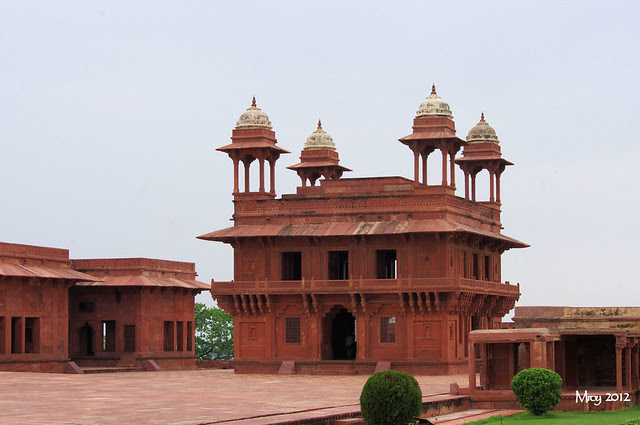 The Diwan-i-Khas is the hall of private audience where the emperor hears and presides over people's disputes. 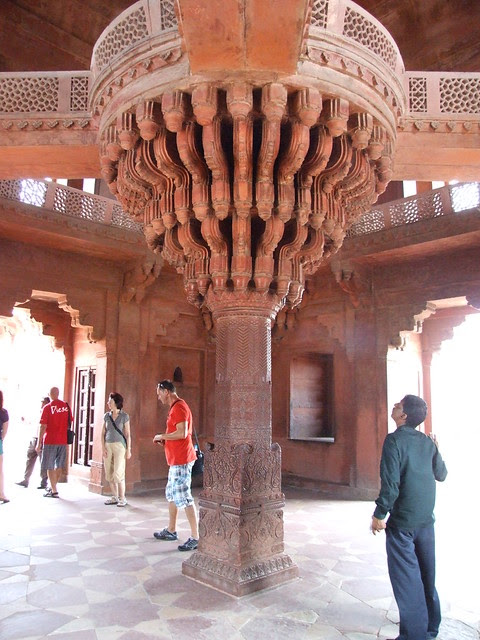 The Diwan-i-Khas appears to be two storey from outside but it's a one story buidling with a central pillar that's ornate with carvings. 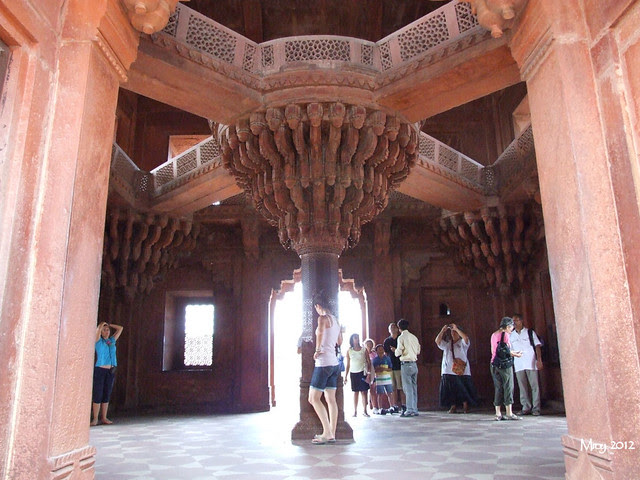 A favorite photo spot too. 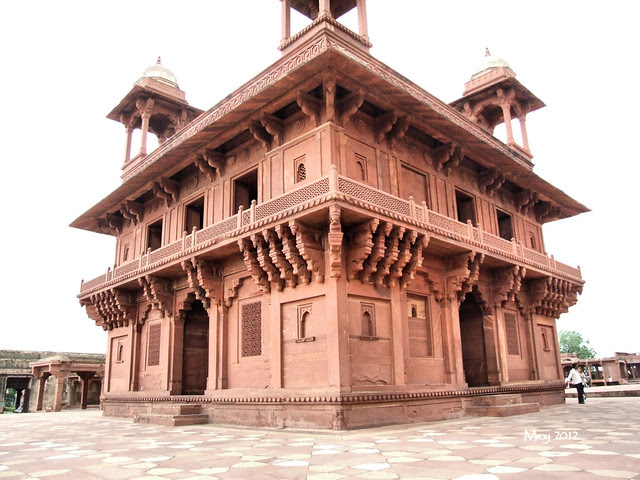 The private hall from the back side. 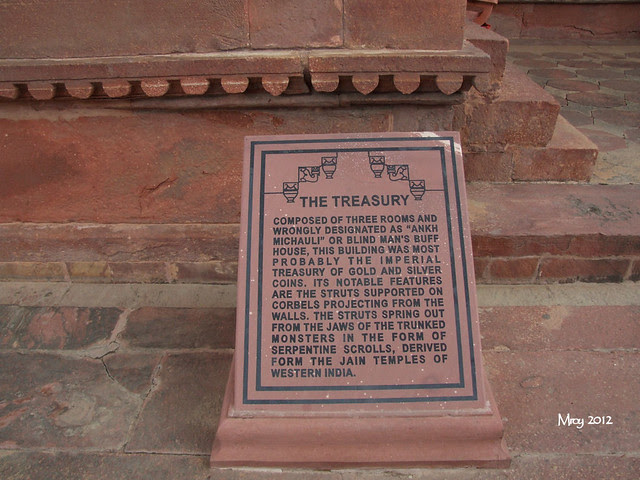 Where the money is. 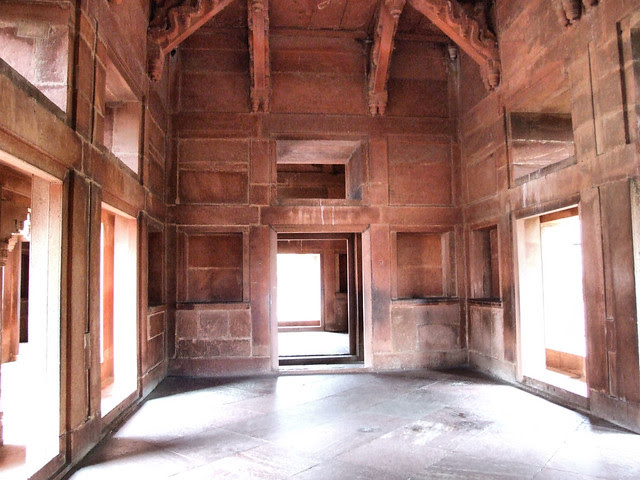 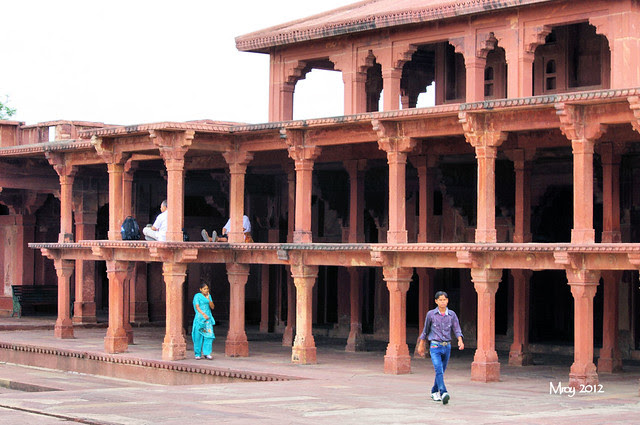 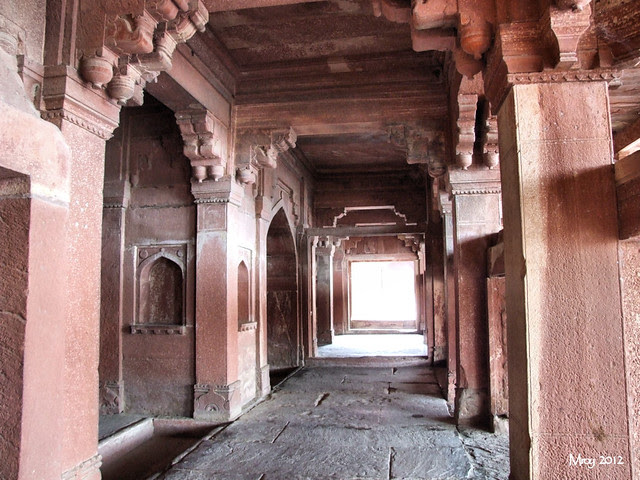 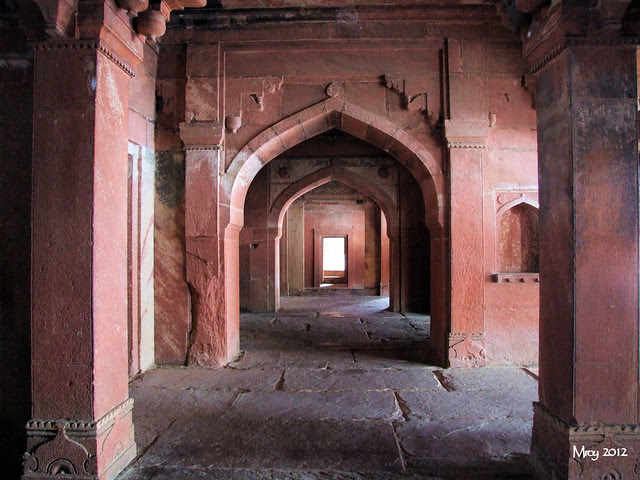 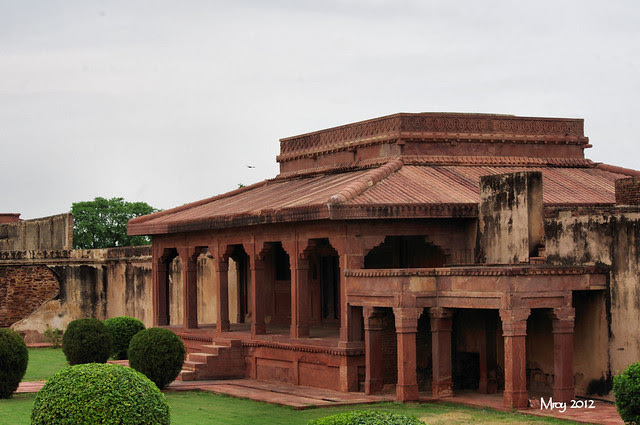 Because in the old days, in his time, paintings were not popular, Akbar decorated the palaces with carvings, ornate ones, geometric ones, some with flowers and birds. The Christian wife's (inside the town were palaces for his 3 wives, one was Christian, one Muslim and another Hindu.) palace was the smallest, but have the most beautiful carvings in my opinion. 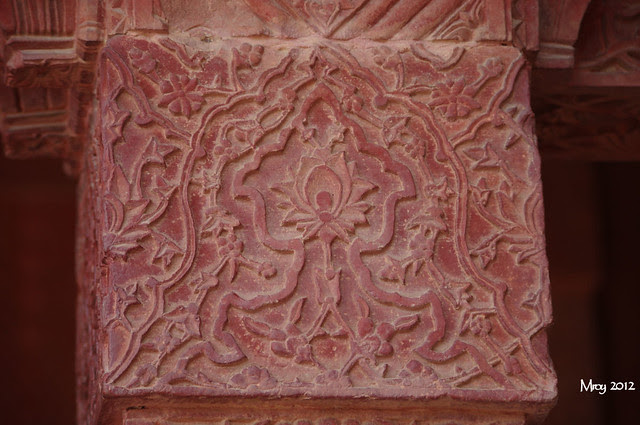 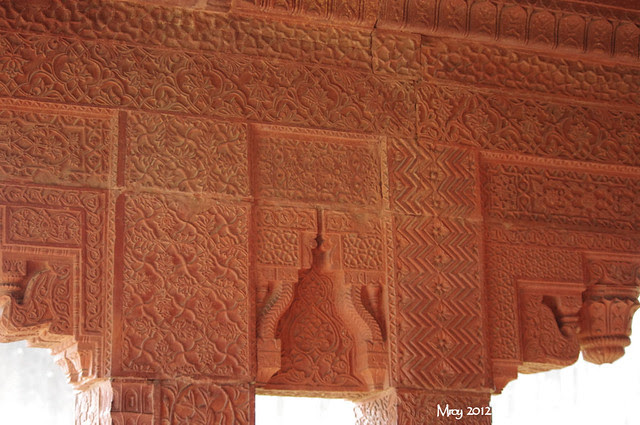 Every inch is carved. 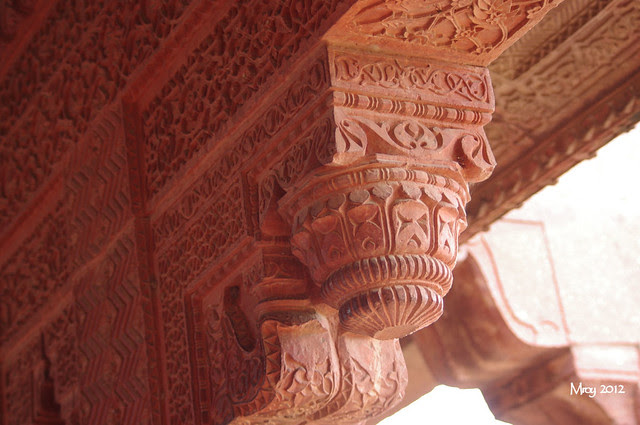 No stones left unturned (er, uncarved in this case.) 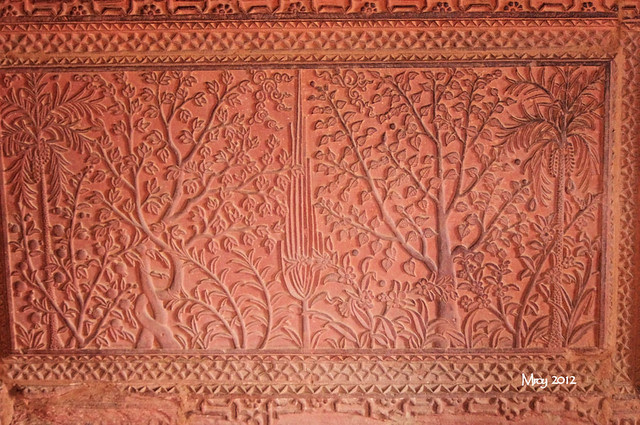 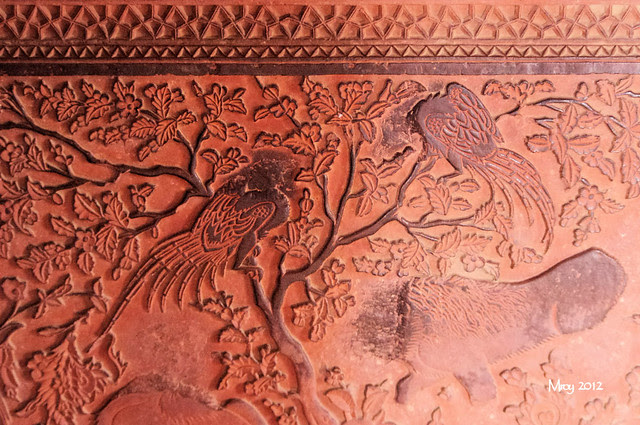 Akbar showed tolerance towards all religion (he married women from different religion). However, his successor wasn't as tolerant. When his successor came to power he cut off/scrape the head off the birds that were carved on the walls. We were told that the practice of carving birds with head on is sacrilegious to the Islam faith. If there are any out here who knows about this practice/belief, feel free to correct this or amend what we were told. 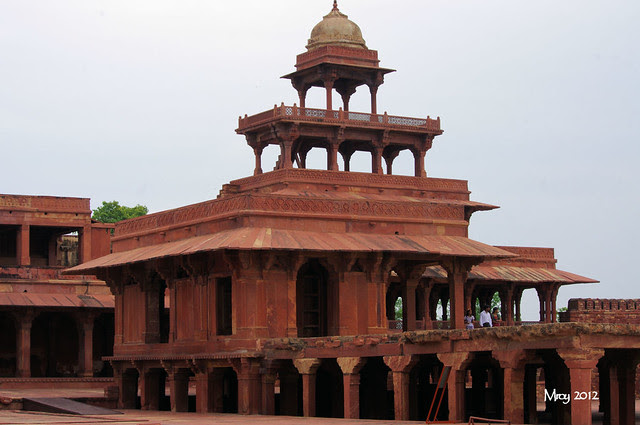 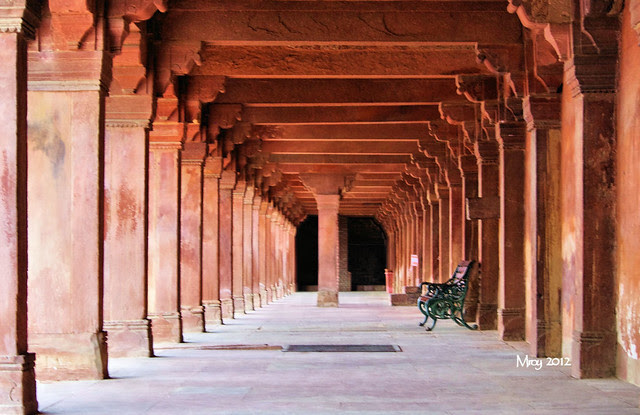 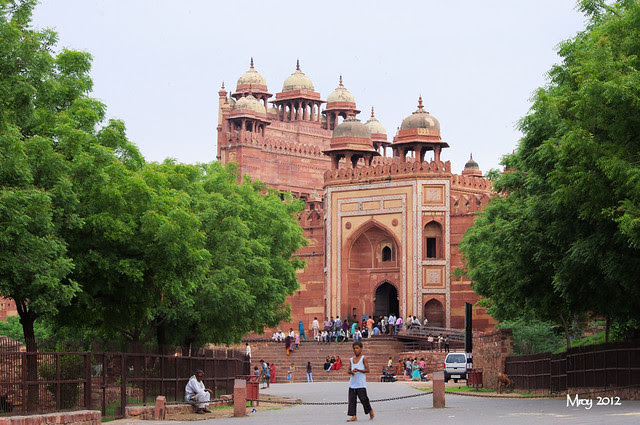 Leaving the palaces towards the mosque. 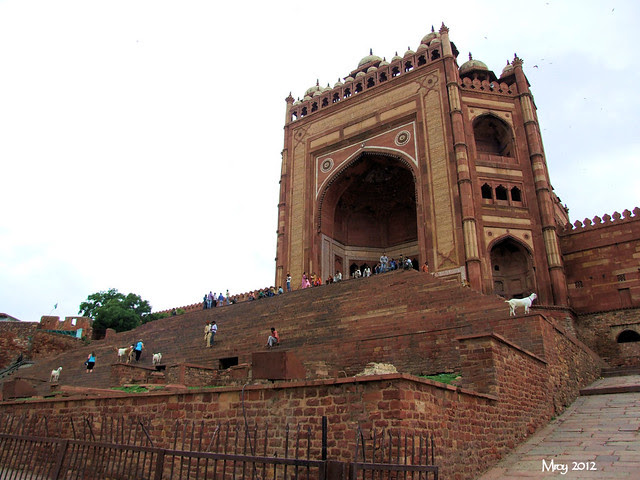 The view from the road, yes that's a goat.

Since it's a mosque, the entire compound must be explored on bare feet, which can be quite tricky, because the place is filled with people. Many parts reek of urine and for those who are finicky, this isn't the best place to go to, even though the place is really gorgeous. Also a word to the wise, there are many vendors here. They are inside the compound, following you, bugging you. Never even look or acknowledge their presence because you would not be able to shake them off your side. Our tour guide instructed us to ignore them. As a local and tourist guide, they cannot tell the vendors nor the beggars to stay away in front of them, so its for us tourists to stand our ground and say no. Having said that, this part of the tour was less enjoyable than the palaces. 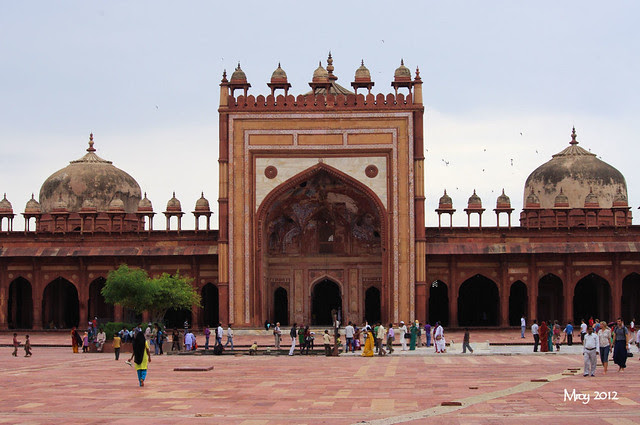 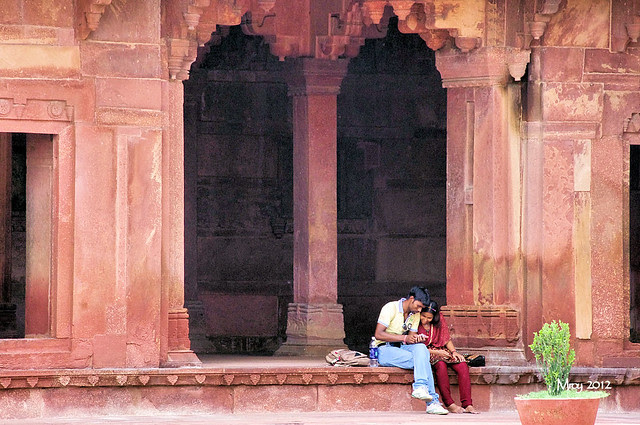 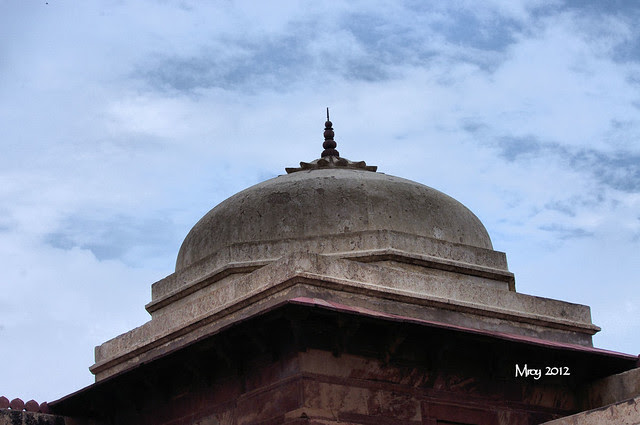 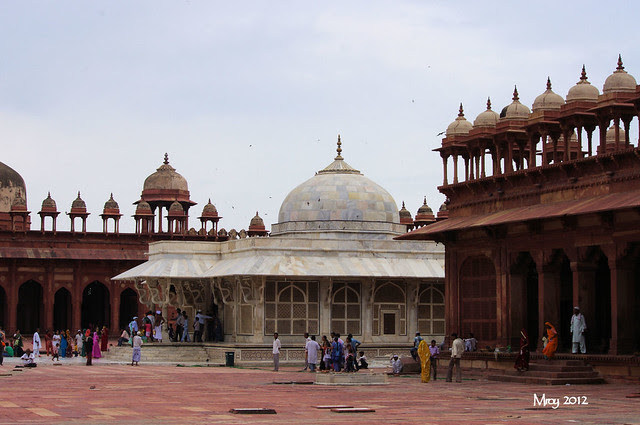 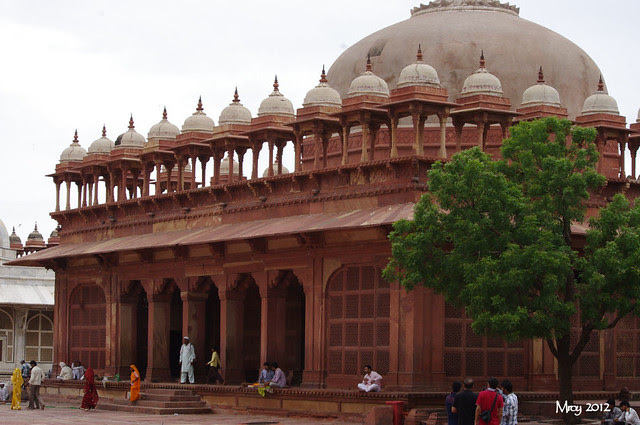 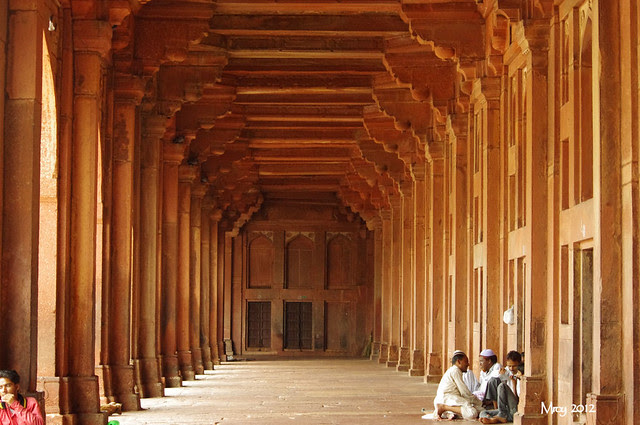 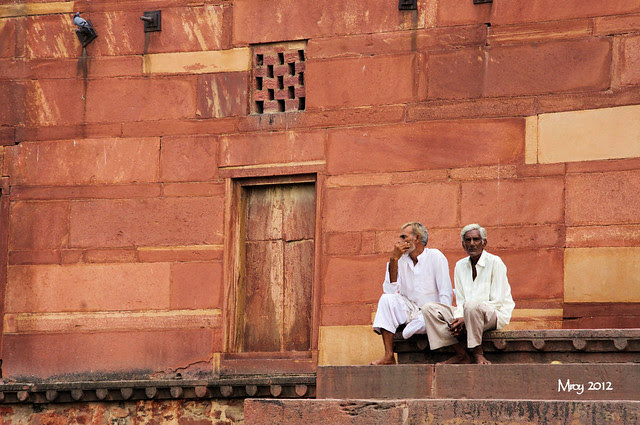