Misty Mendocino In May

To celebrate our wedding anniversary in May, I snagged a hotel voucher for Mendocino Hotel, the historic hotel in downtown seaside Mendocino. It was a bucket list dream, two were ticked off, one for staying overnight in Mendocino and two, staying in Mendocino Hotel.

My love affair with Mendocino began 16-17 years ago when I first laid eyes on her on a day trip with my then boyfriend. We planned to come back here and stay for a night or two. We have returned here on numerous day trips (although the drive is long I don't know why we did it), but I didn't think it would take that long for a dream to be fulfilled.

Now married to that same boyfriend, we were always looking forward to the day when we could have a little Mendocino getaway.

Mendocino was once a logging town, then it became an artists haven, now it's a tourist destination.

It is famous for being the location of the old tv show MURDER SHE WROTE. In the show the protagonist, Jessica Fletcher lives in fictional town of Cabot Cove, Maine. The exterior shots were taken from Mendocino. Jessica Fletcher's House is a bed and breakfast and you can see people posing in front of the house. I did, on my first visit.

This little seaside town is a favorite of Hollywood. Per wiki some of the movies shot here are Karate Kid III, Dying Young, Overboard (in Fort Bragg nearby) and many others.

It's easy to see the attraction that the city has. The rugged coast, the mist-shrouded woods, the pretty as postcard sights. Dotting the highway are many bed and breakfasts and inns. The town itself is small, easily navigable by foot. It's best explored by foot. You can stop to look out at the water or duck inside one of the many artsy stores or stuff yourself with mouthwatering goodness in the many restaurants inside the town or nearby.

There is hiking, kayaking, and many other outdoor activities. For us, we took it easy. We did a lot of sightseeing and browsing. We sampled vegetarian and vegan delectables, smelled artisanal organic and botanical soaps and lotions and creams and engaged in as much photography as we could muster.

And now for the photos that we took: 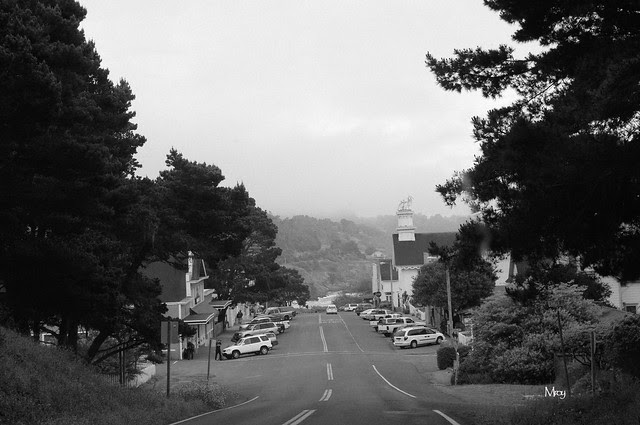 The Blair House - was Jessica Fletcher's house on Murder She Wrote.


Temple Kwan Tai - known to be the oldest Taoist temple in rural California.

As you can see we were blessed with drizzly, cloudy, misty, foggy weather.

SKYWATCH is a weekly gathering of sky lovers and sky watchers. Join us.
Labels: california Mendocino