From the Piazza de Ferrari, we set out to explore the nearby neighborhoods. With the help of the map from the HOHO pamphlet that was given to us we first walked a few blocks and turned left. According to the map, this way we would easily reach the Via XX Settembre, which is one of the famous streets in Genoa. This is the shopping "district" so to speak. It's a long street, that features a mixture of high end stores with names you can easily identify and some low end stores, like Chinese bric-bracs. The part of the street that we tackled have covered walkways and incredible marble inlaid floors. This is definitely a good place to feel the pulse of the city. We walked a few blocks, then crossed the street and walked back from that side. I got too excited when I spotted a store of French cosmetics/fragrance that I used to use exclusively (I don't anymore because I'm now allergic to perfume) a long time ago. Before I could only get them via catalog [I was in Bali in Jan. 2016 and found another store there.) I made an attempt to browse inside the store, but I was fully cognizant that there was no budget for such a luxury at that time. 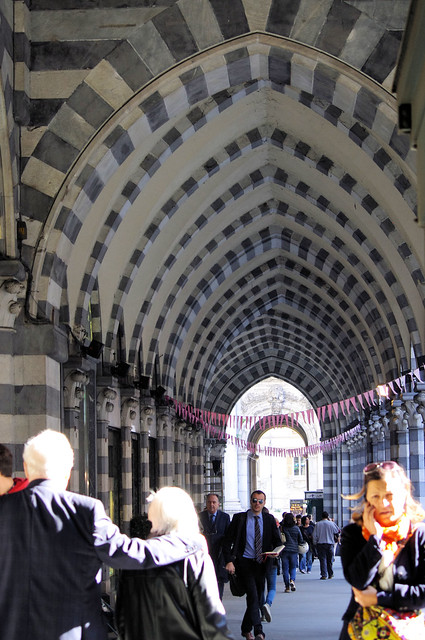 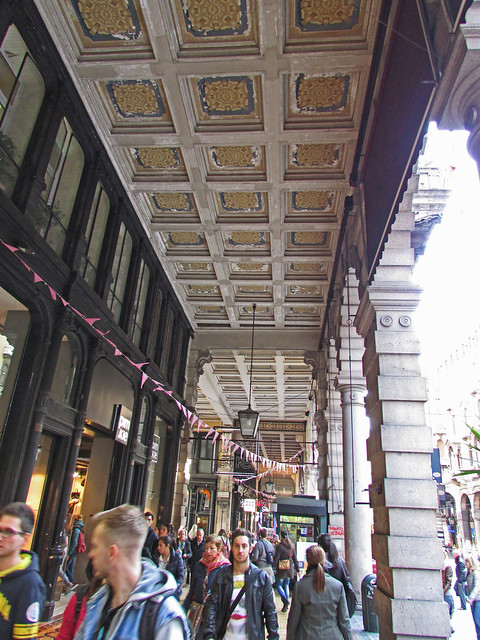 Covered sidewalk, other side 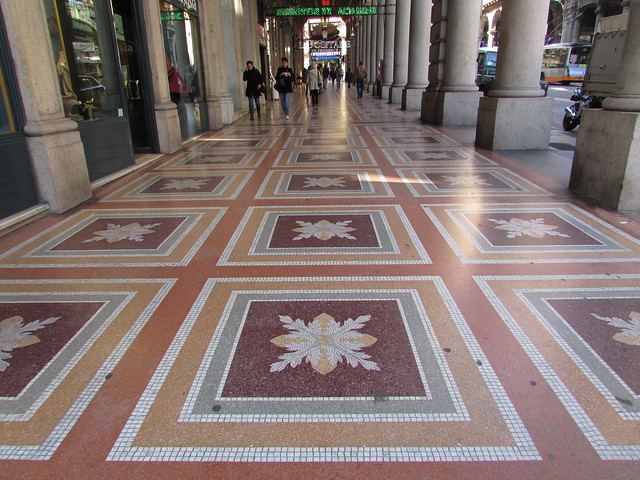 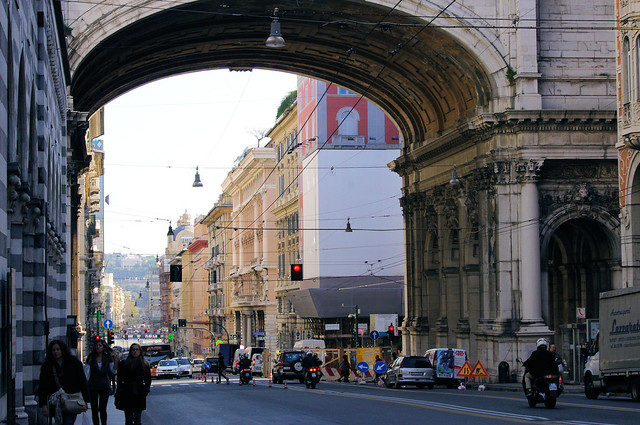 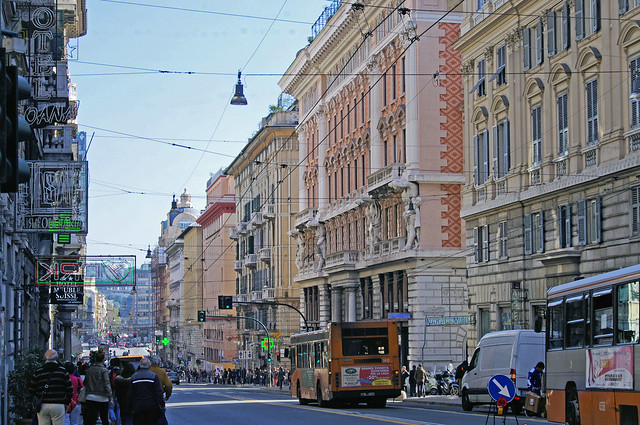 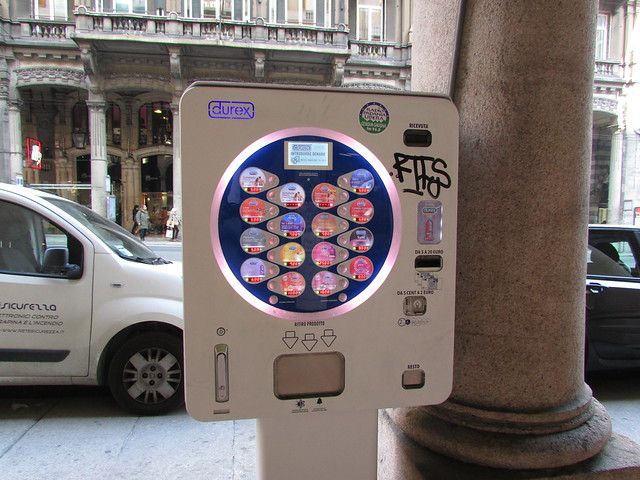 The husband was amused by the condom vending machine, he begged me to photograph it. I don't know how I feel about this. On the one hand, they probably don't have convenience stores there like 7-11 that are open 24 hours where you can get these items, so a vending machine is probably necessary.

As much as we enjoyed the window shopping, we have reached the starting point of Piazza de Ferrari and from here we took the right side and ended up walking narrow street flanked by beautiful old buildings. I noticed a church, but it was closed. At the end of this narrow street was a little courtyard and a magnificent church, the Cattedrale di San Lorenzo with its black and white marble facade. I was breathless. The church is so beautiful. It made my day. In front of the church school children were eating their lunch. The church was closed, a pity. I regret that I didn't know about this church before coming here because from reading about it, this is a very historical church and it contained some artworks, especially one item that I wanted to see. 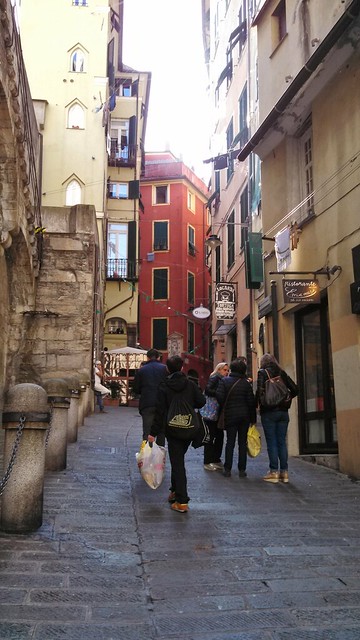 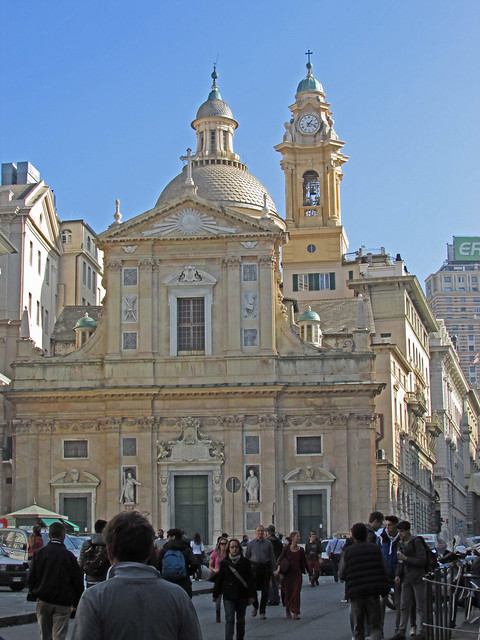 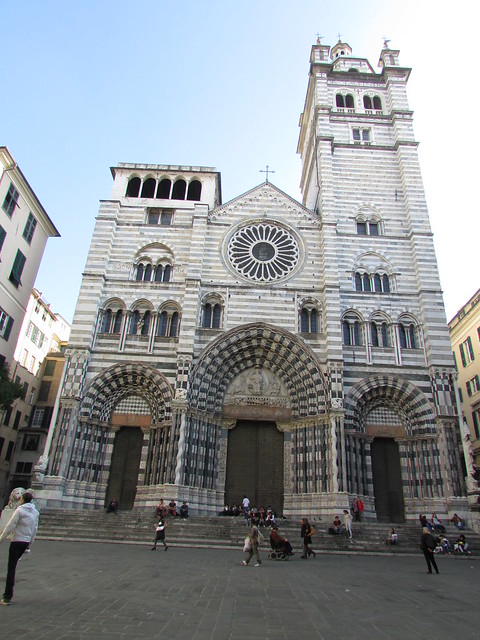 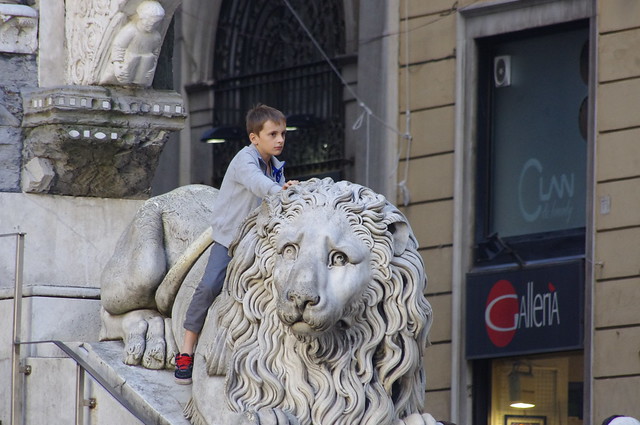 Lion statue by the stairs 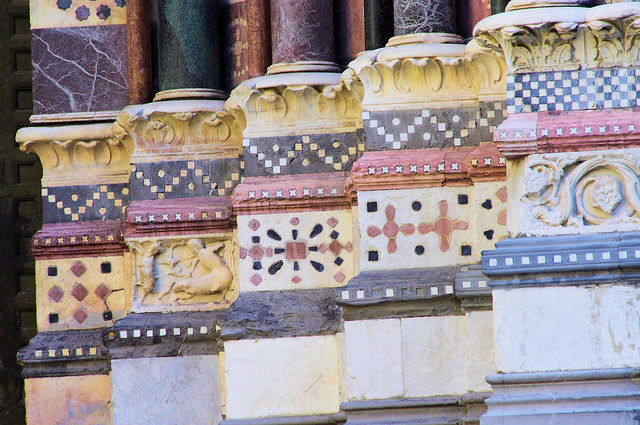 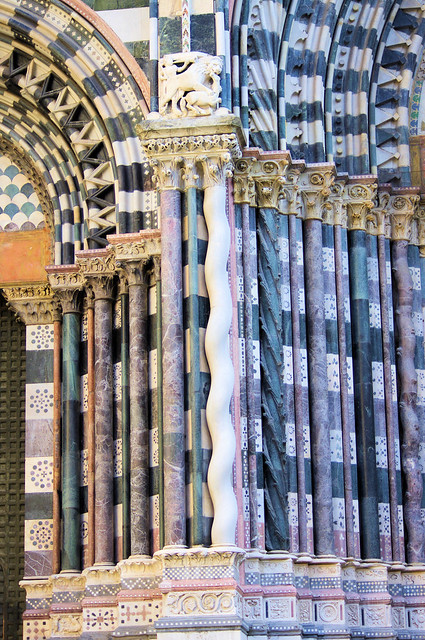 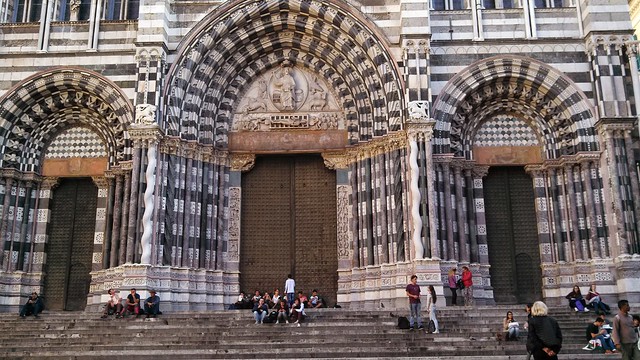 The Museum of the Treasury lies under the cathedral and holds a collection of jewellery and silverware from 9 AD up to the present. Among the most important pieces are the sacred bowl (it:Sacro Catino) brought by Guglielmo Embriaco after the conquest of Caesarea and supposed to be the chalice used by Christ during the Last Supper; and the Cassa Processionale del Corpus Domini.

Once I had taken all the photographs I wanted (not really) we got stir crazy again and so we walked back, passing small eateries and shops. We contemplated on getting something to eat, but for some reason I never get hungry while touring on port days. Don't know why! But that's good for my pocket book and my waist line.

Meandering through the narrow cobblestones while enjoying the architecture and being enveloped in rich culture - this was how a port day should be. Soon we reached the end of the road. We reached the gate with two towers or Torri di Porta Soprana. 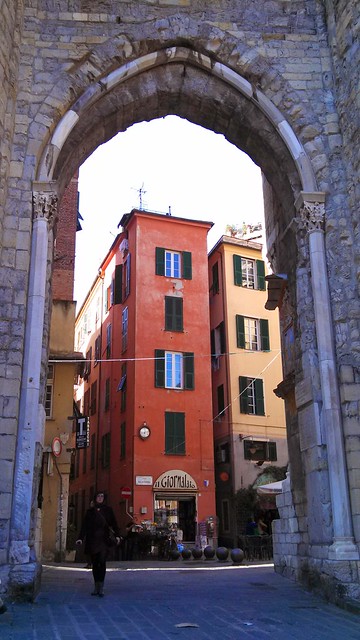 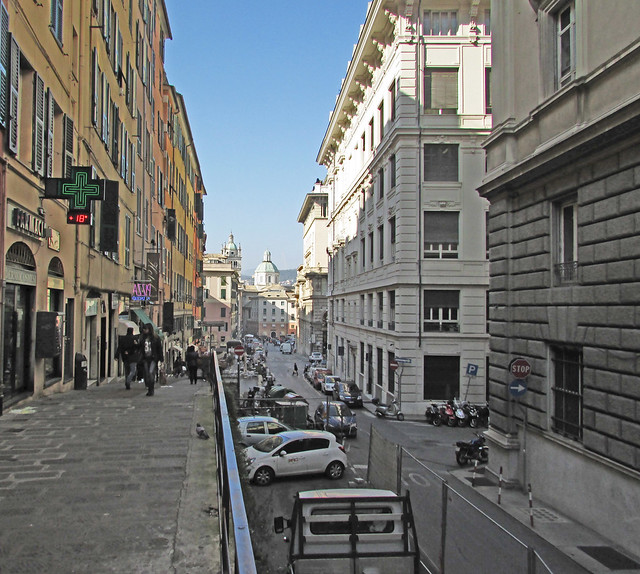 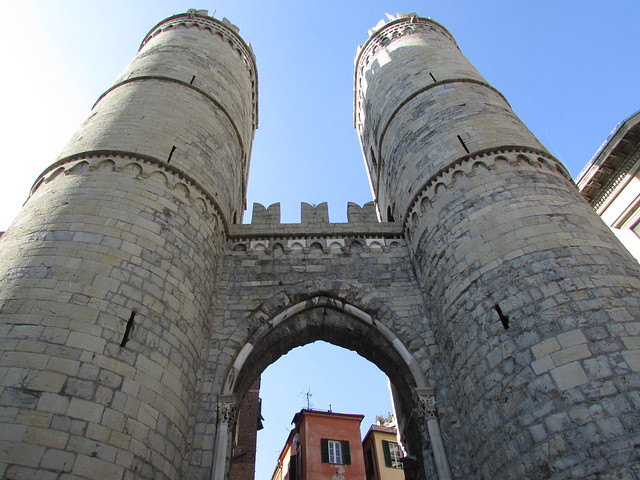 Near the gates we stumbled upon the house where Christopher Columbus was born and raised. It is a simple brick house that you can easily pass by without noticing, but since we were in sightseeing mode, we found it. By the way, I was not aware that the famous explorer called this city home so I was so surprised. 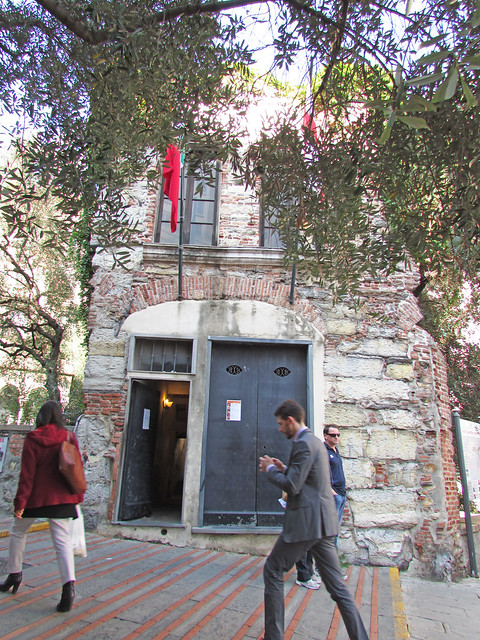 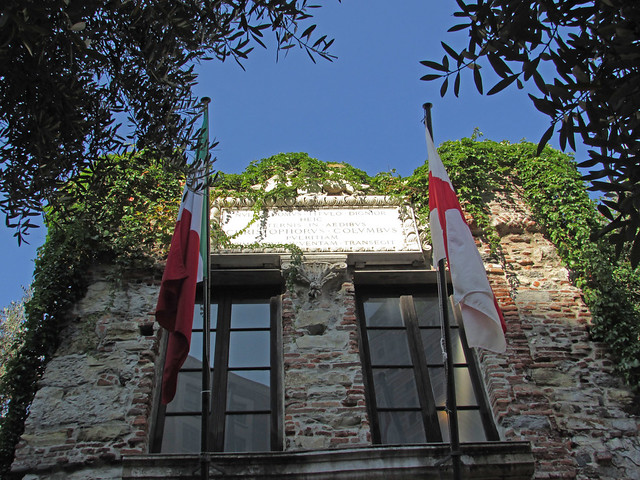 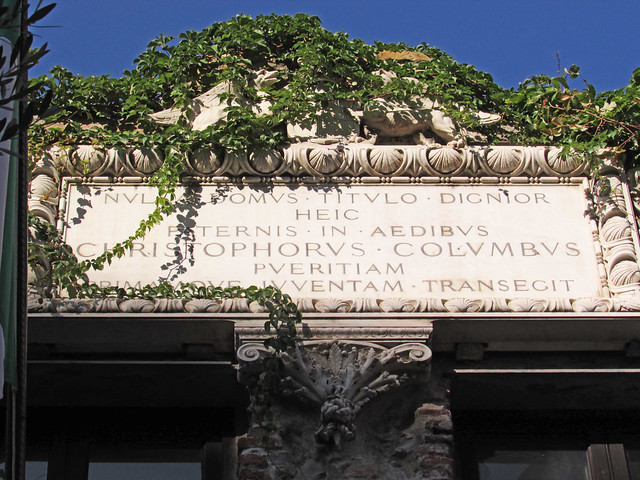 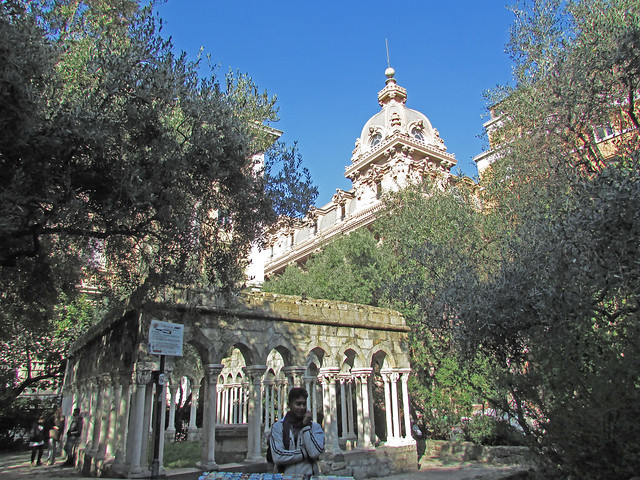 Also nearby stood the St. Andrew's cloisters which are the remains of an ancient monatery near the Soprana gates.