Lisbon: The Night We Discovered Ginja

We continued our evening stroll once we had our fill of coffee and pastries. Naturally the sugary confections energized us to go out and explore more. We walked past Figueira Square and was happy to find a grocery store in the area. Here we stocked up on sardines (gifts for friends back home) and browsed at all the foreign merchandise. One of the joys of traveling for us is going to a grocery store and look at what the locals buy and eat. Inside there is a pasteleria off the entrance on the left side. We scanned the pastries inside the glass cabinet, our mouth watering the entire time. And all this after we just had a little snack. Unfortunately we had to wait until the long line thinned out a bit because we did not want to wait in line while on vacation. To wait out the line, we checked out the wine section, which was fortuitously located next to the pastries area. As I was reading the labels on the bottle, I spotted something I have never seen before. A ginja. I may have been talking loudly to the husband that out of nowhere a man appeared on my side asking me if I wanted to sample the liquer. Naturally I did. The guy who apparently manned the wine and spirits section of the grocery store gave us samples, talked about it and told us about the ginja house nearby which is the most famous in Lisbon. His words. 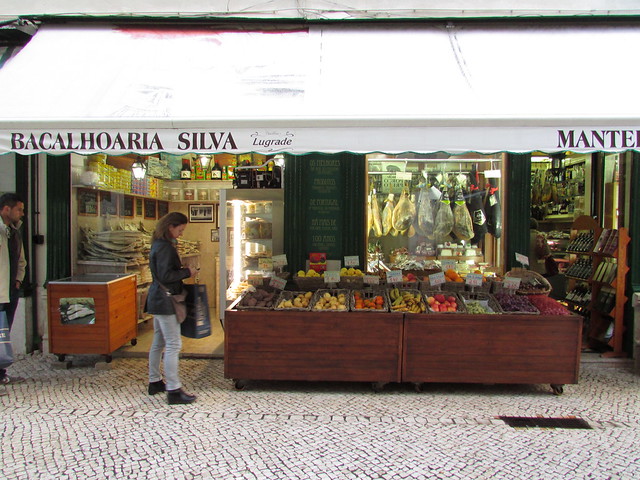 Not the grocery store.

Once we were done with our shopping we were ready to go back to the hotel and call it a night. It was a very long day after all, but we passed by a small locals only restaurant with a sign about a fish soup. Fish soup sounded just like the perfect dinner on a rainy cold night. So we went in and got soup to go.

We passed by the ginja house on the way to the hotel. Ginjinha or simply Ginja, is a portuguese liqueur made by infusing ginja berries, (sour cherry) (Prunus cerasus austera, the Morello cherry) in alcohol (aguardente is used) and adding sugar together with other ingredients. Ginjinha is served in a shot form with a piece of the fruit in the bottom of the cup. It is a favourite liqueur of many Portuguese and a typical drink in Lisbon, 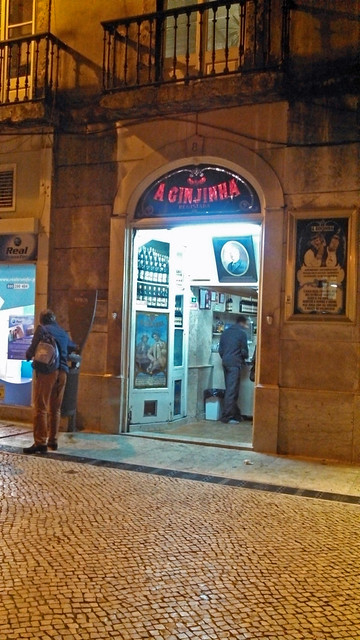 The ginja house without a line. We have seen it with long lines. We waited in line for a shot of ginja. One euro per shot. 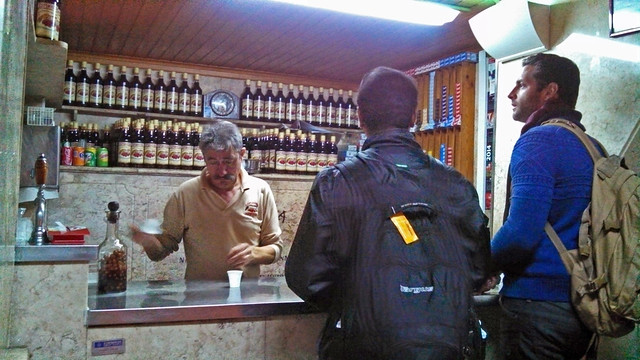 The Ginjinha of the Praça de São Domingos in Lisbon was the first establishment in that city to commercialize the drink that gives its name to it. A Galician friar of the Church of Santo António, Francisco Espinheira, had the experience of leaving ginja berries in aguardente (the Portuguese brandy), adding sugar, water and cinnamon. The success was immediate and Ginginha became the typical drink of Lisbon. In the 2000s, the business was in the hands of the fifth generation. Currently, "the Ginjinha" is an exporter for the market in the United States. The production of Ginjinha reached over 150 thousand litres per year. In many places of Portugal, especially in the Lisbon and Oeste regions, there are several producers of this traditional liqueur. In Óbidos, Ginjinha is commonly served in a small edible chocolate cup. (wiki) 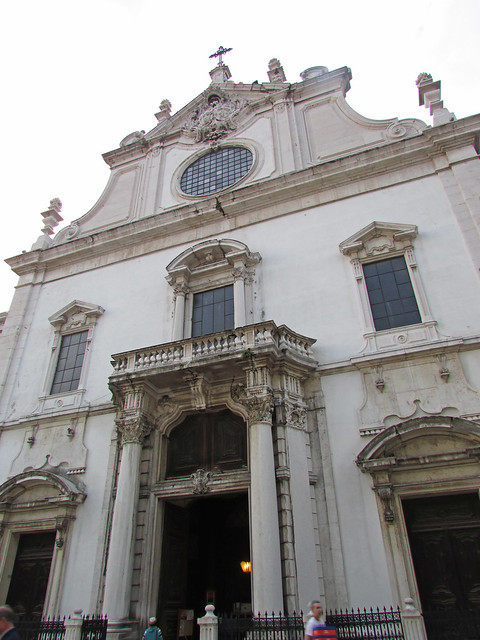 The church of Sao Domingo is located near the ginja house. We noticed it earlier but never got around to going inside until now. To the right of the National Theater, east of Rossio, is the Church of São Domingos, that is either blessed or cursed, having survived fires and earthquakes.

Prior to the Great Earthquake of 1755 this was where the São Domingos Convent stood, from which the Inquisition read out its sentences. In 1950 it was partially destroyed by a fire and has since undergone restoration, but there are still clear signs of the fire (the permeating smell and the scorched pillars).

Worthy of note is the high altar, with red marble columns that support the sculptural composition of the Holy Trinity.

Another outstanding feature is the sacristy, which for many years held the remains of King Afonso III, until they were moved to Alcobaça. 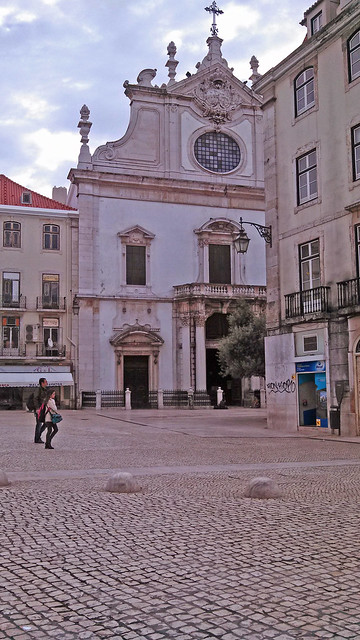 The church photographed the next morning. 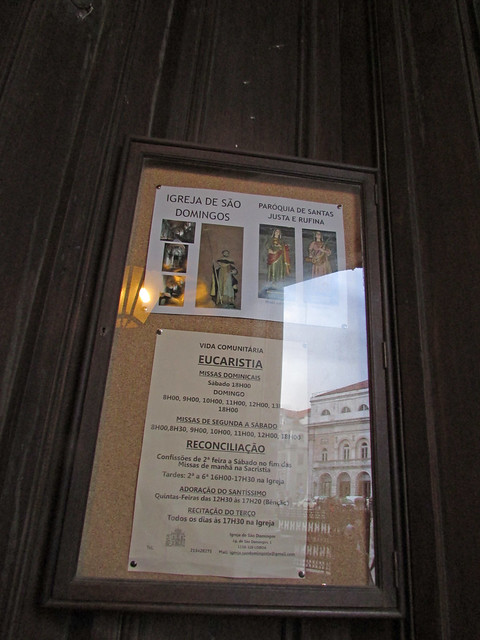 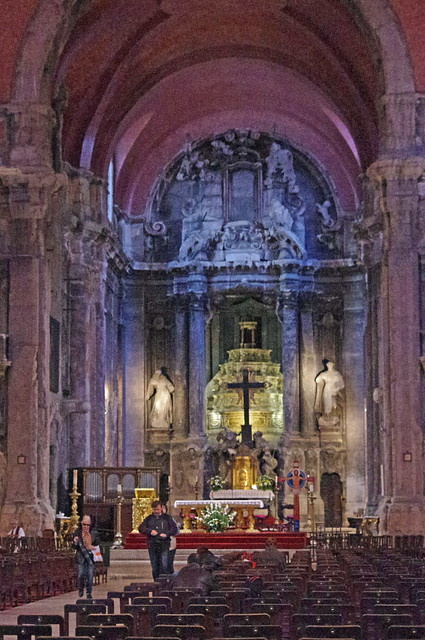 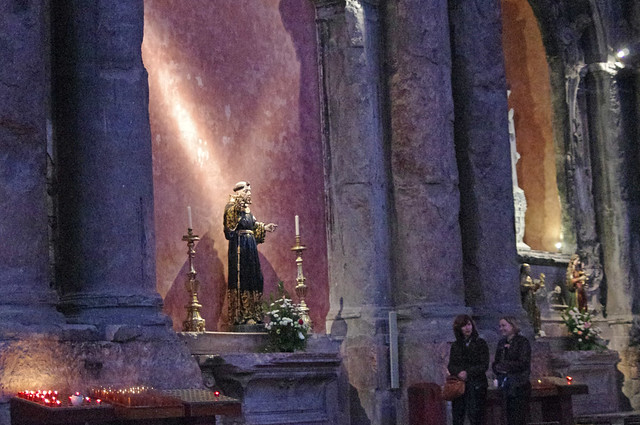 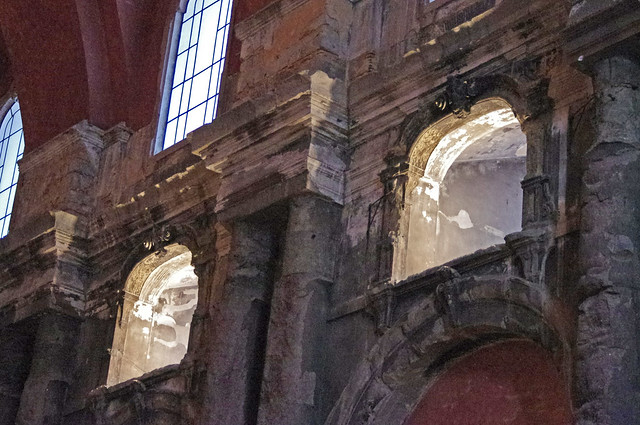 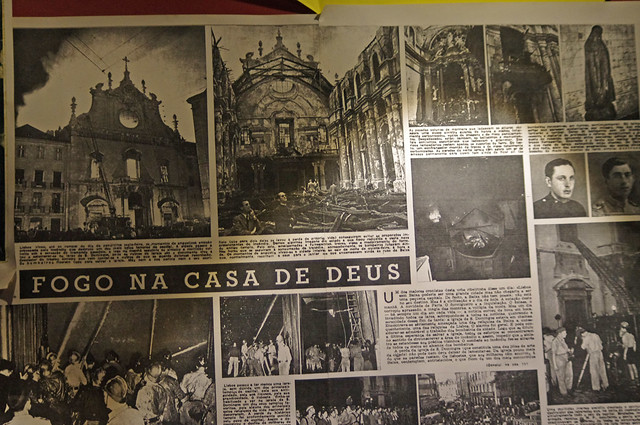 The church was dimly lit but you can still see very clearly signs of the fire. 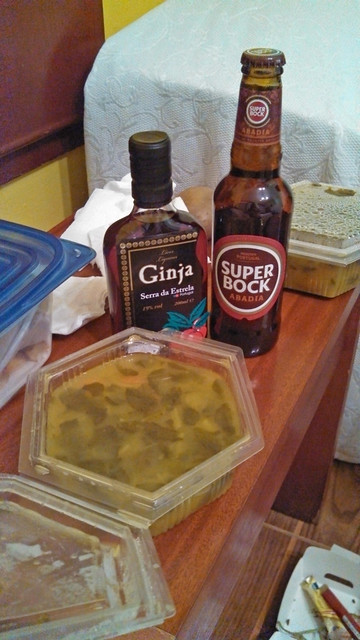 The first day ended with us having take out consisting of fish soup and some pastries with local beer and ginja.