This second visit to Lisbon was aimed at correcting the mistakes we made on the first visit. One of it is not taking the trams. Every single site you visit touts the value of taking the trams to sightsee. It is like visiting San Francisco without riding the famous cable cars up and down the hills.

Thus on this somewhat very long day, after we were exhausted from exploring the city on foot, we finally thought we'd take the famous tram #28, which has a stop in front of our hotel. Many online have warned us that the best way to take the tram is to get on it on a major stop. This stop we didn't know if it's a major stop, but it's next to a subway station and near all the attractions like Praca do Rossio. Also the tram is notorious for pickpockets, so be very careful, because like any major attraction, this can get really packed.

Thankfully, because we were at a major stop, we think, and we let the first tram go and waited for the next one, we were able to find a seat. The tram shakes and rolls up and down the hills passing through the most interesting districts of Lisbon. As far as I could tell, tourists take this tram for sightseeing and perhaps the locals take the other trams, not numbered #28.

Oh by the way, an added bonus is this tram ride is included in the price we paid for the Yellow Bus Hop On Hop Off Tour earlier this morning. Neat isn't it? 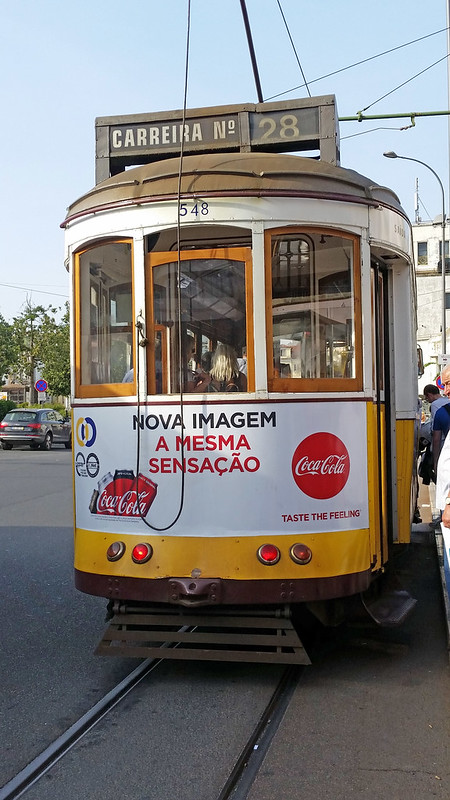 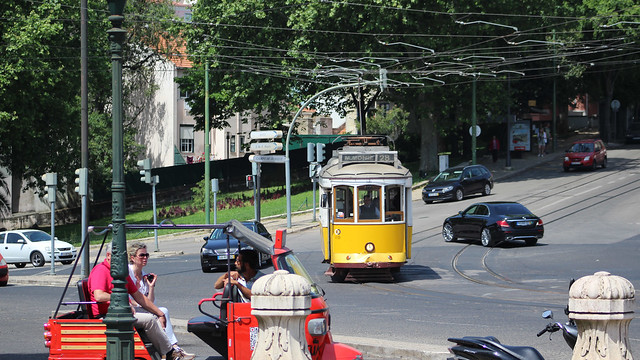 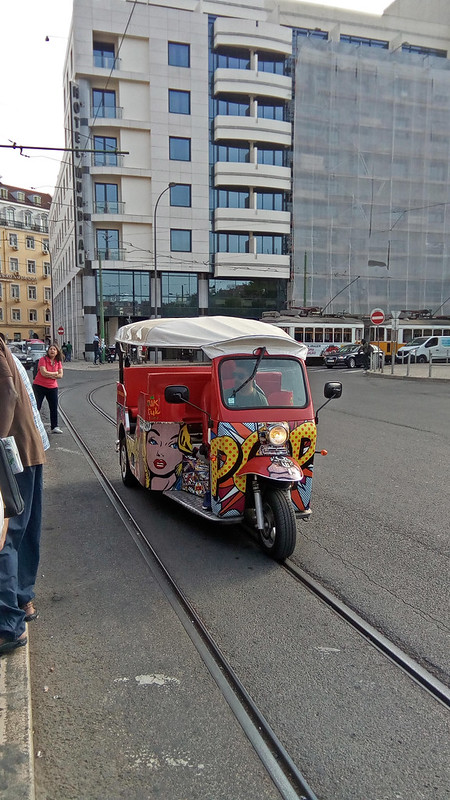 Tuktuk drivers convince people in queue for #28 to try sightseeing via tuktuk.

Hope you are ready to sightsee with me as drive by local neighorhoods along cobblestone streets. 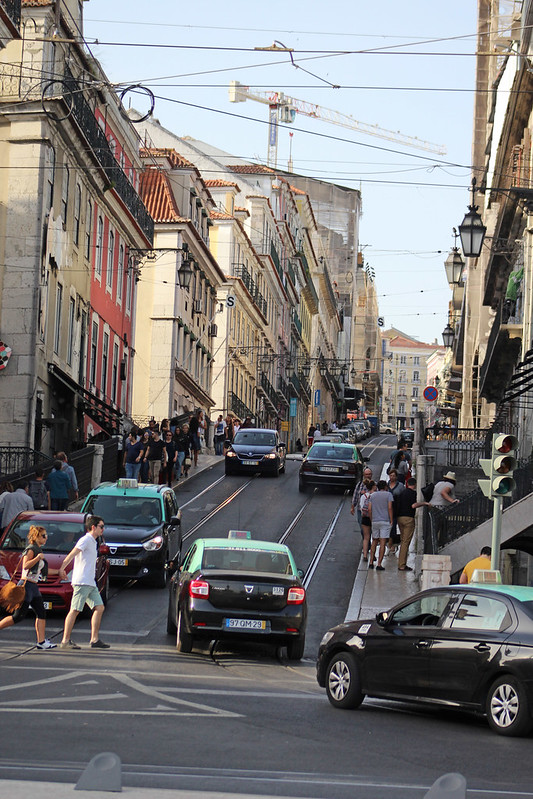 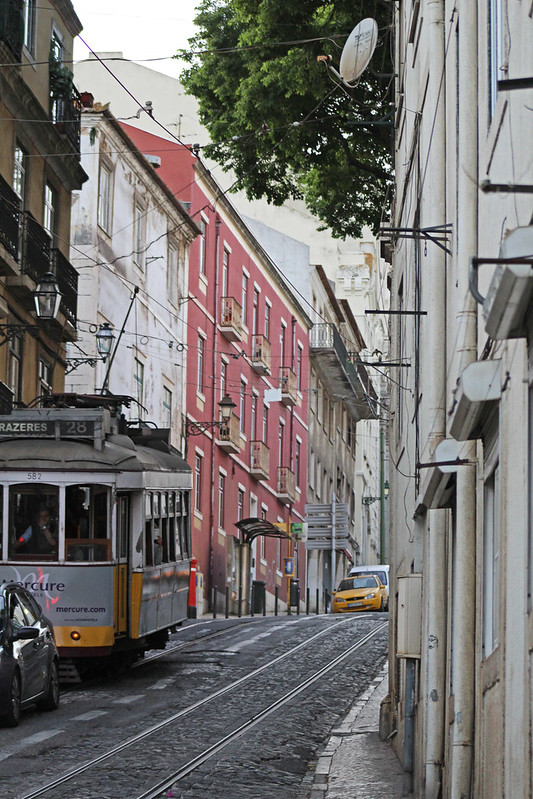 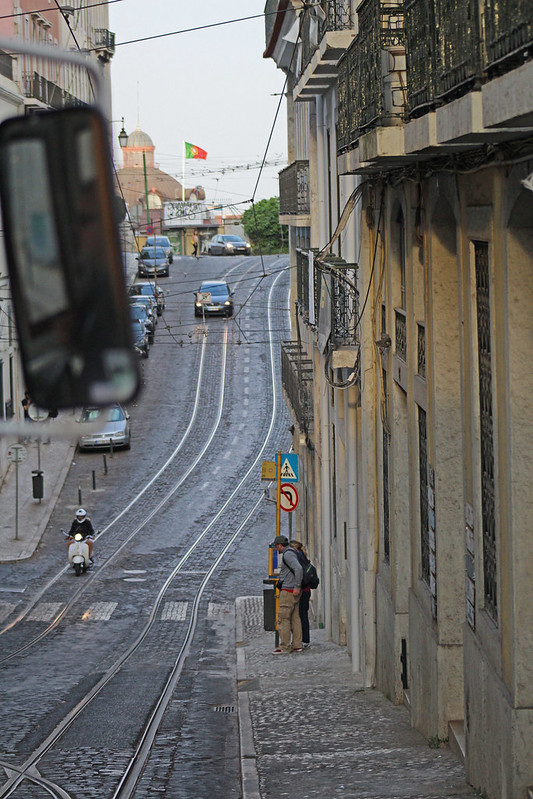 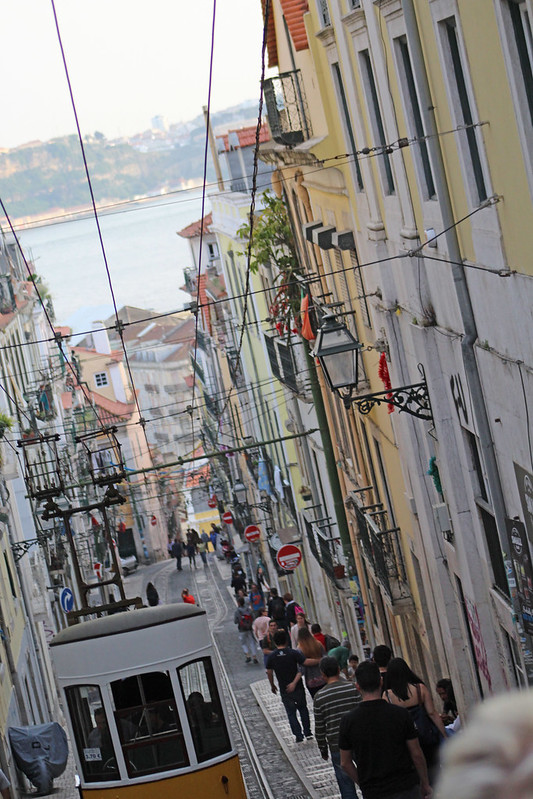 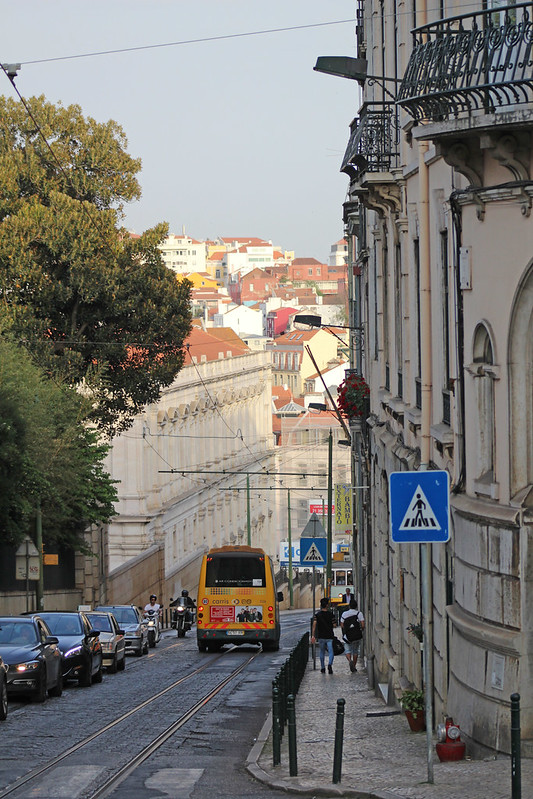 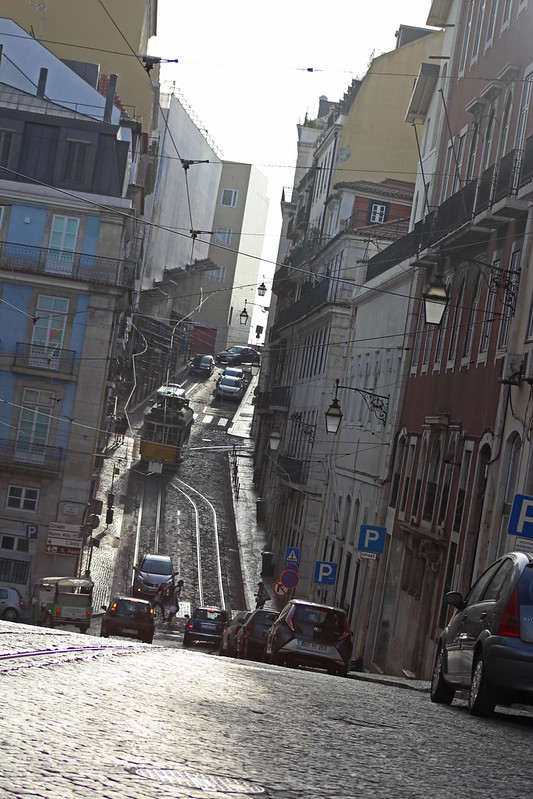 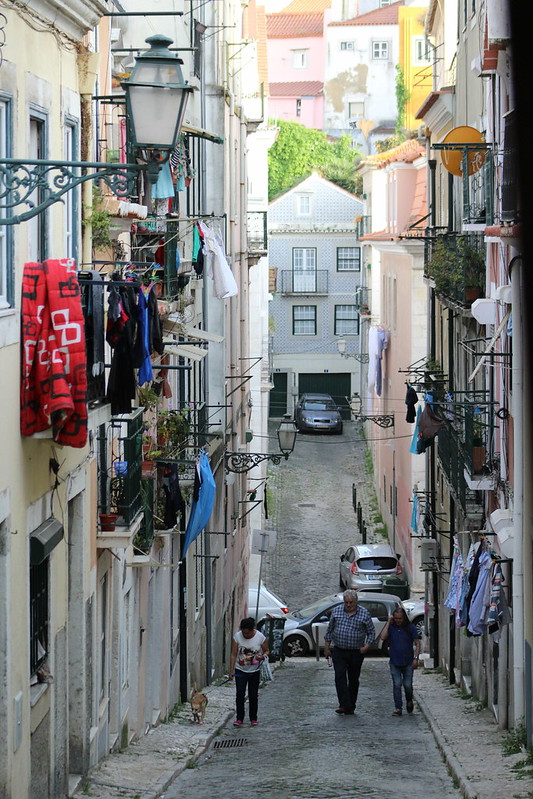 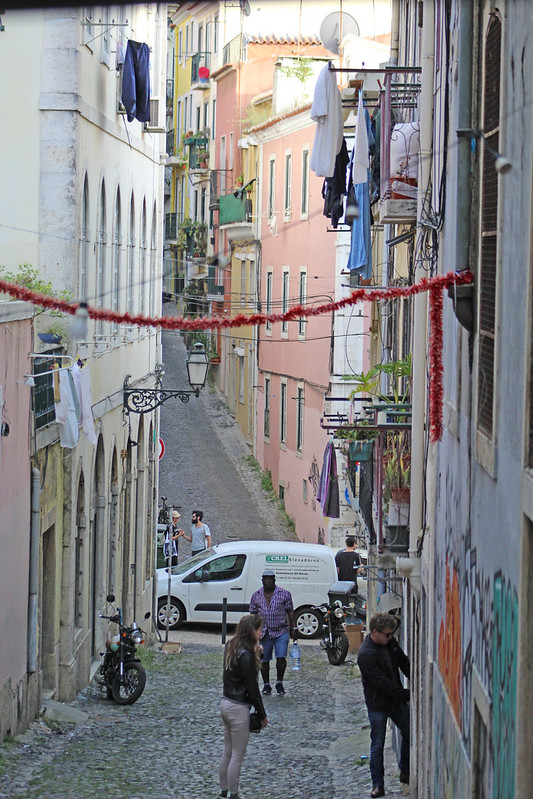 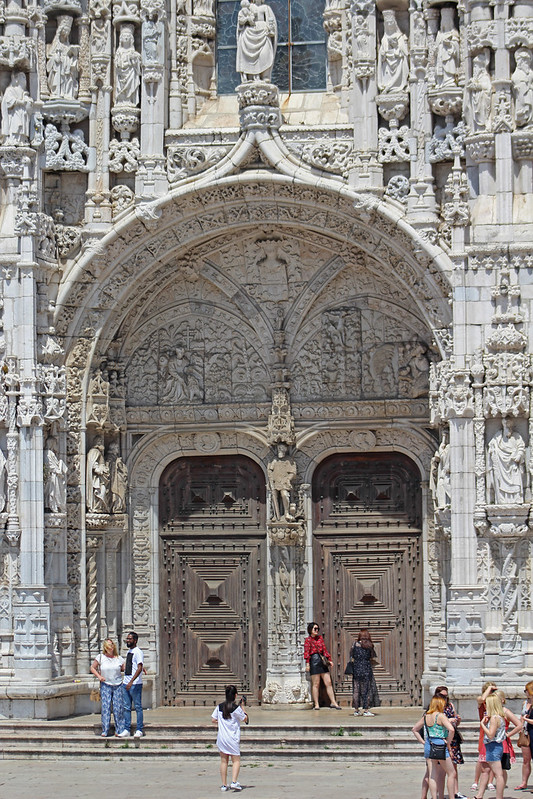 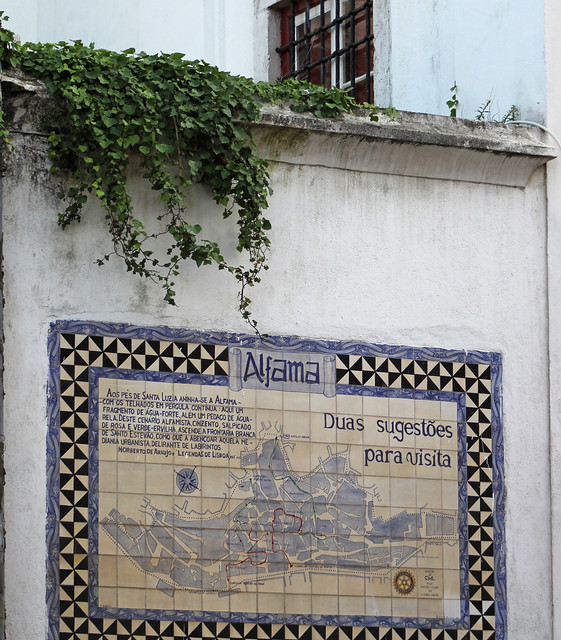 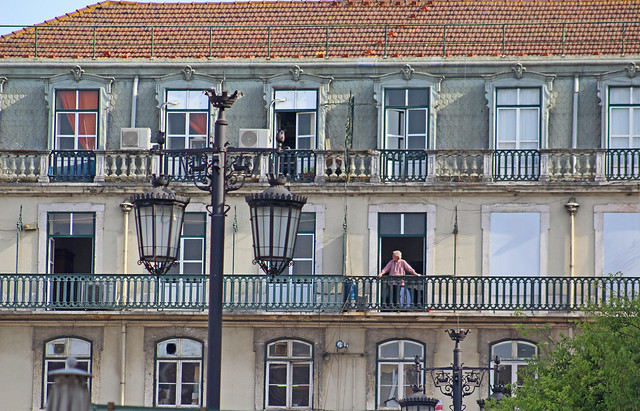 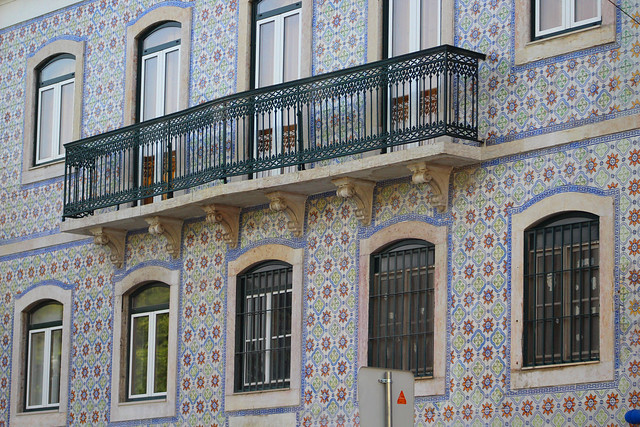 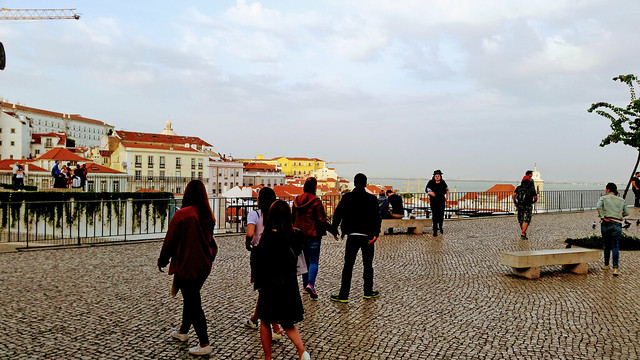 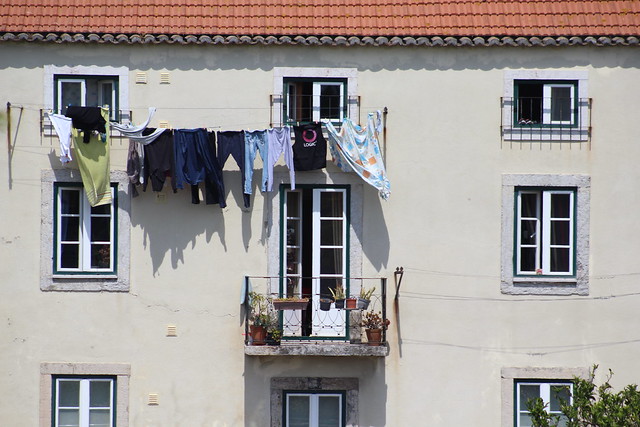 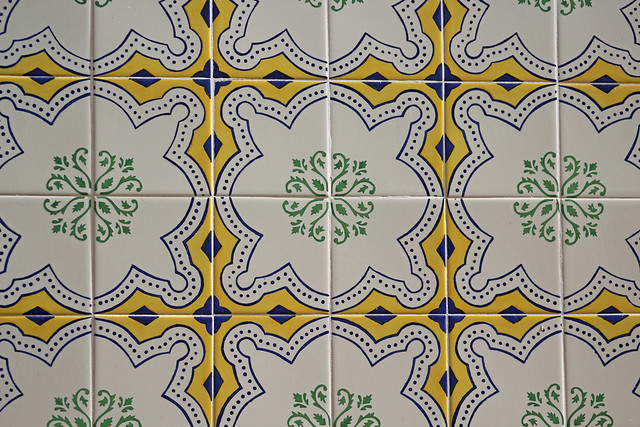 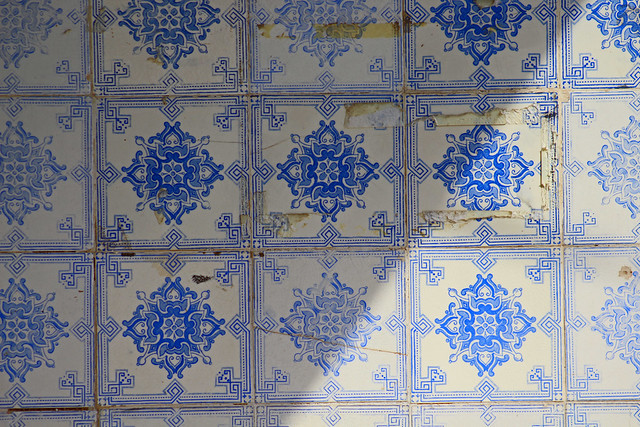 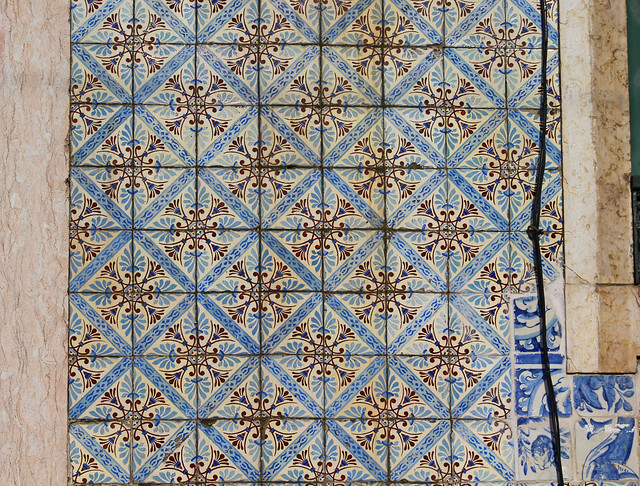 Being caught in traffic gave me a chance to enjoy the tiles (azulejos) on the facade of the houses/buildings.

As we were caught in traffic jam, we realized that we were still so far away from returning to our point of origin and that the time was nearing for a meet up with our companions. Without knowing where we were, I followed the husband on foot in finding our way back to Praca do Rossio. Truth be told, I am not wired for directions, but thankfully the husband is and can easily find the direction we needed to go, even though we don't particularly know where we were at that time.

Thankfully after some time, we managed to get to where we were going and boy was I glad to have walked back because we got to see the neighborhoods up close and personal. It's a very safe city, in my opinion, and we were lost and did not ask anyone for directions, but somehow we found our destination (secret: Google maps).

By dinner time, we met up with our travel buddies. Not planning beforehand where and what to eat, we spent time walking up and down the neighborhood looking at restaurant menus. Eventually we settled on the very first restaurant we looked at. Despite the chilly night, we chose to sit outdoors (when in Lisbon?). Aside from the heater, the very attentive server placed a comfortable throw over each lap and talked us into ordering items we didn't know were not free. Three of us got paella negra and the hubs ordered some fish. Then we were talked into having some bread and a variety of spread and cheeses (not free, and quite expensive)Ha, ha, ha. Lesson learned.

Since the night was still young we walked all the way to Praca do Commercio. We went for a drink and got both of them to sample a shot of Lisbon's famous ginja.

Back at the hotel, we said goodbyes to them. They were leaving in the morning for Barcelona where they would catch their flight back to Oakland. We are staying two more days here and needed to get some sleep. The next day is going to be as full and exhausting as this one.