California: Oh Lord, Stuck in Lodi For A Day

Lodi, California is still unknown to majority of wine drinking population. This city in San Joaquin Valley is keeping up with its more popular cousins, Napa and Sonoma as winegrape growing/producing region. Lodi is dubbed as the "Zinfandel Capital of the World".

Anyway, the city has come into our radar a while back. In fact, my husband was hoping we could go there for my birthday. The plan fell through, and I was a bit disappointed. I really want to see more of California. And so, this past Saturday, we just had to go, even for a day trip only.

From our house, it was a 1.5 hour drive. However, there was a major road project in the main highway and we got diverted into the delta (Sacramento River delta) town of Walnut Grove. Nice to see small towns and country scenes. 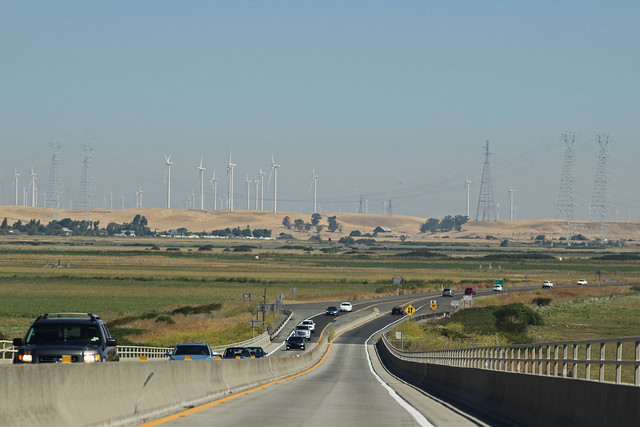 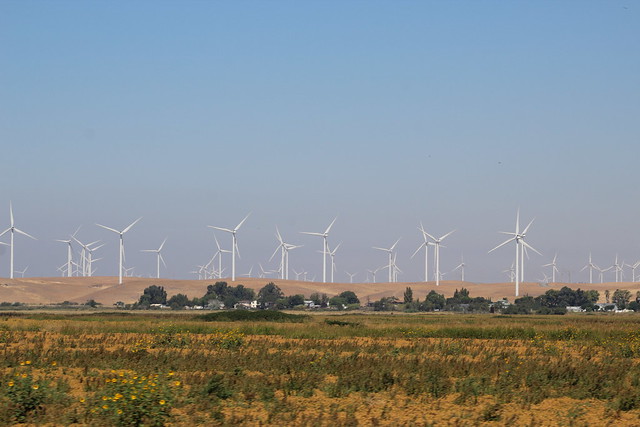 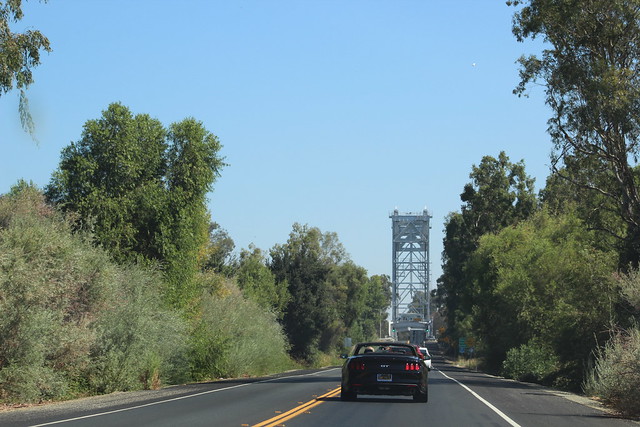 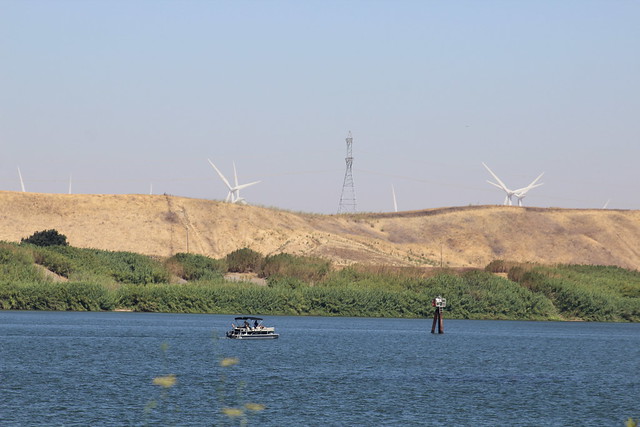 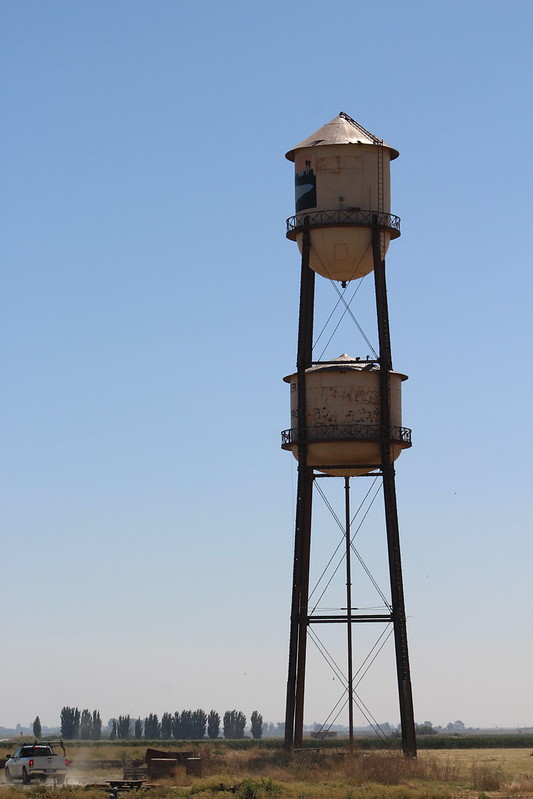 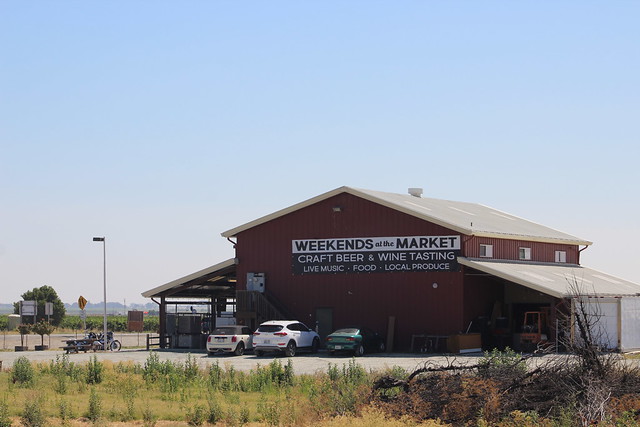 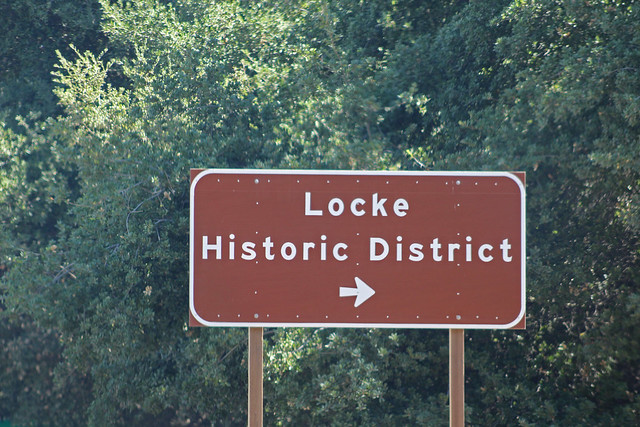 Once we arrived in Lodi, we plugged the Visitor Center on the GPS and there we stopped first - for a little wine tasting, of course. 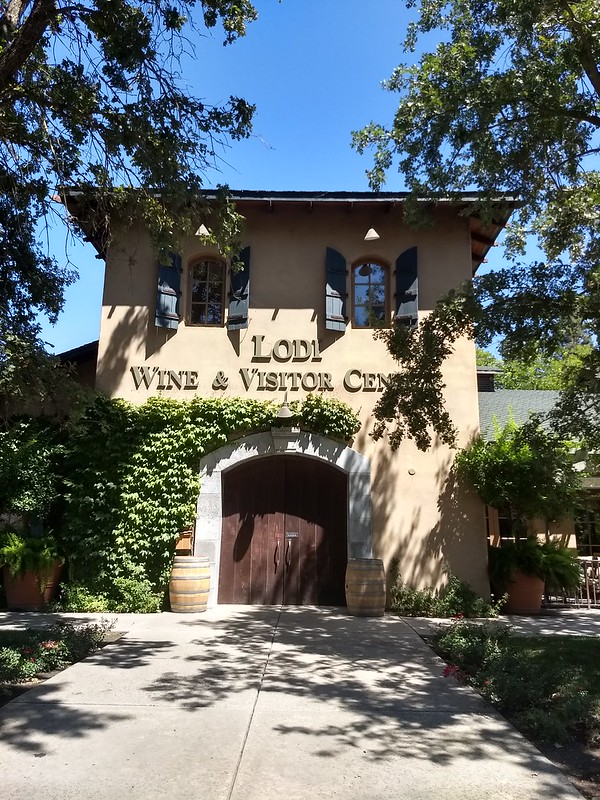 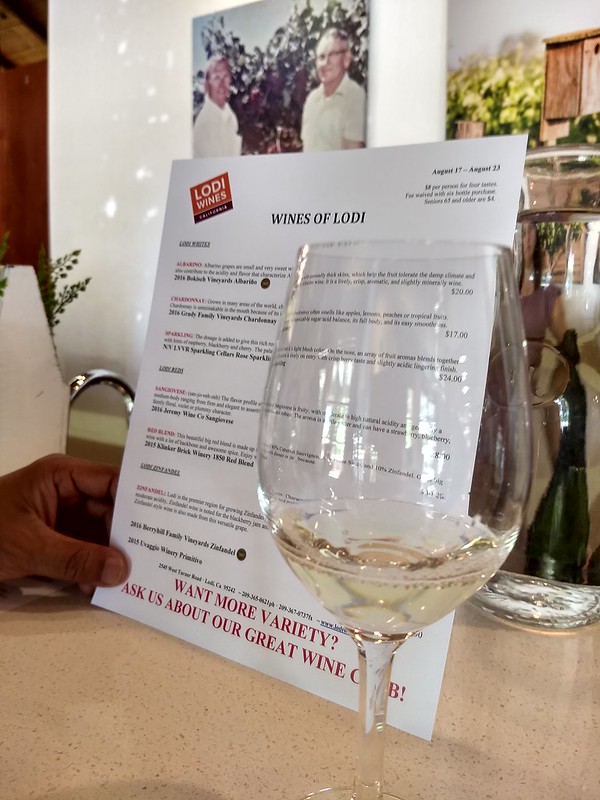 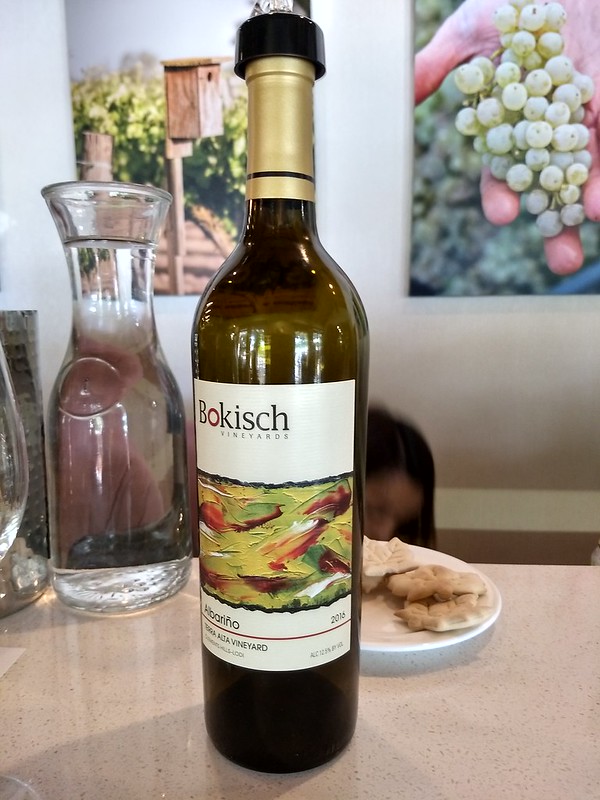 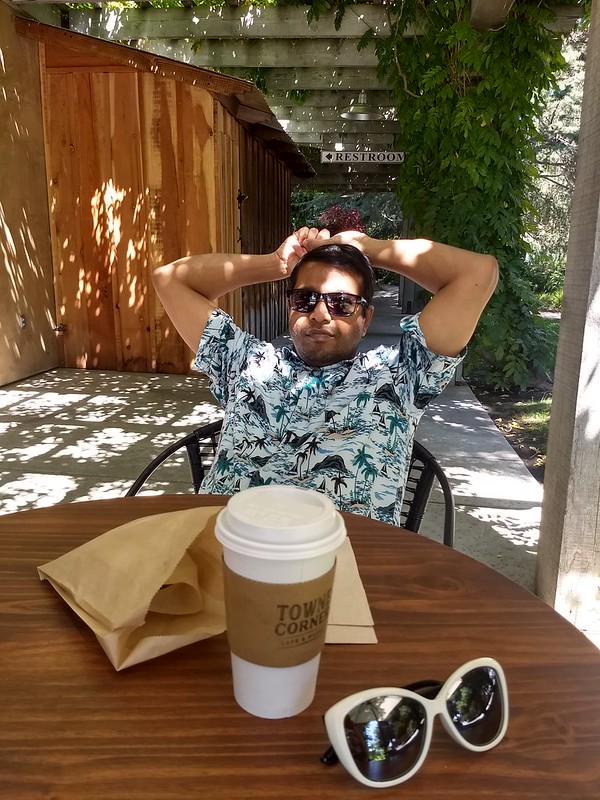 I personally did not like any of the wines I tasted, not enough to buy a bottle, that is. And so when we were done, attached to it is a deli. I was wine tasting on an empty stomach, and that is not good so just in case we had some coffee and scones before we moved on to the next stop.

We went to the downtown area and walked around in a 100-degree temp. The eateries were full and there were two promising breweries/restaurants on the same street, but I wasn't feeling it. Instead we kept on walking and peeking at store windows and eventually ended up in the Lodi Arch. 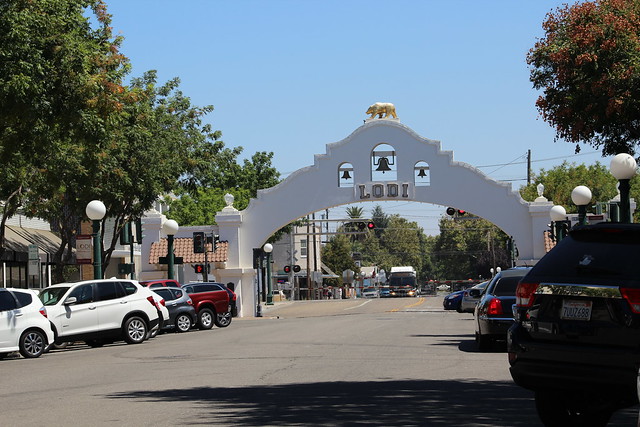 Wikipedia has this entry for Lodi Arch: The Lodi Arch, also known as Mission Arch, in Lodi, California, is one of the few remaining Mission Revival ceremonial structures within the state of California. It was built in 1907 by architect E. B. Brown for the first Lodi Tokay Carnival, which still occurs annually as the Lodi Grape Festival. The following year, a California Golden Bear and a sign reading "Lodi" were added to the arch. The arch was restored in 1956 after its deteriorating condition made it a safety hazard; the golden bear was turned to the North in 1956 and has also been restored twice, in the 1940s and in 2001.In addition to its architectural significance, the arch serves as a symbol of Lodi and a focal point for the city's downtown.

It was listed as both a California Historical Landmark and on the National Register of Historic Places in 1980. 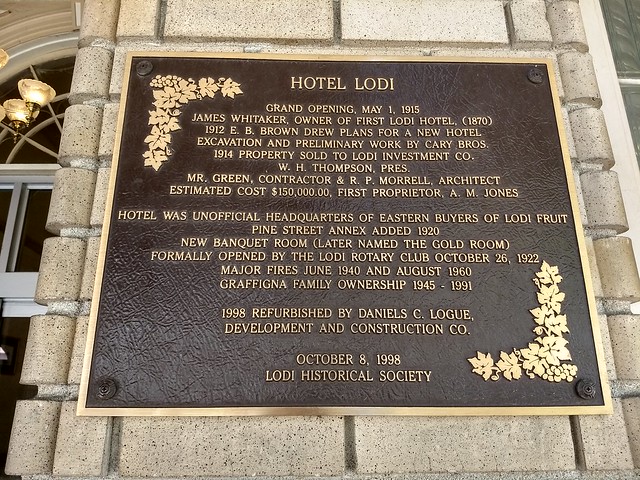 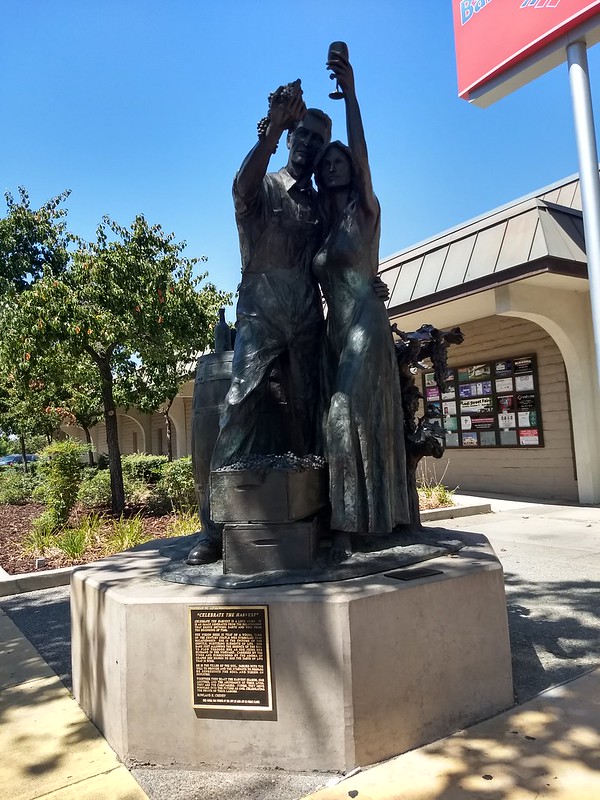 For lunch, we went to another deli for some munchies. 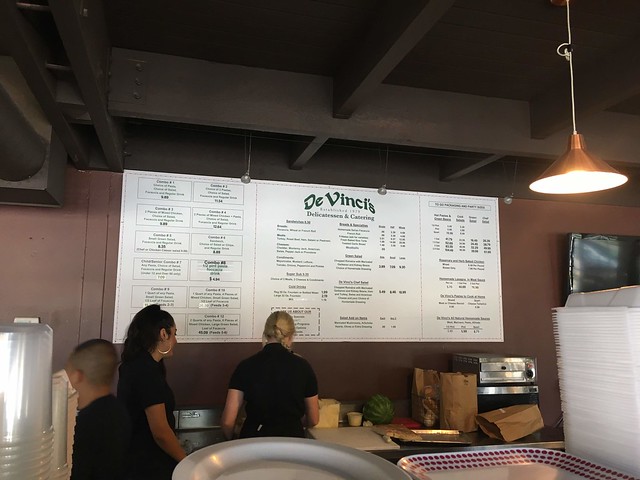 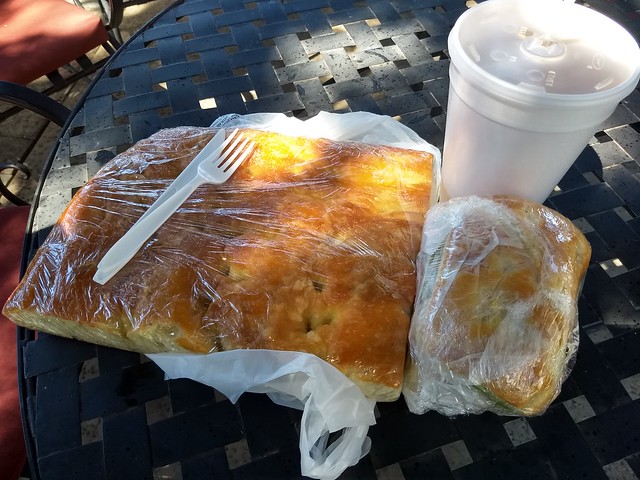 All these for $15, what a value - we ate this after our second wine tasting.

Woodbridge Winery by Robert Mondavi was the next stop for wine tasting. Here I enjoyed the wines in the list for tasting. We bought two bottles to take home. 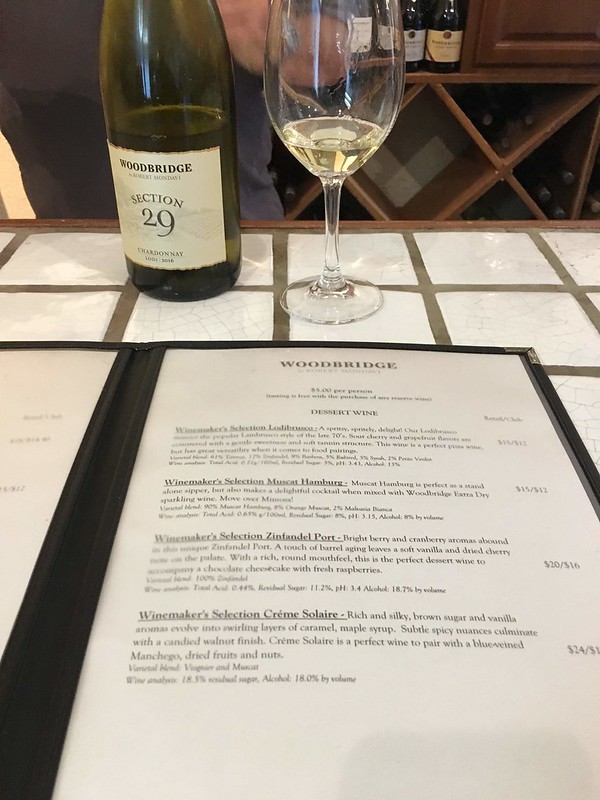 They have a nice set up of tables and chairs in the garden for people to picnic or just chill. We stayed there and ate our sandwich from the deli.

On the drive back home, we stopped at a vineyard next to the road and took a few photos. 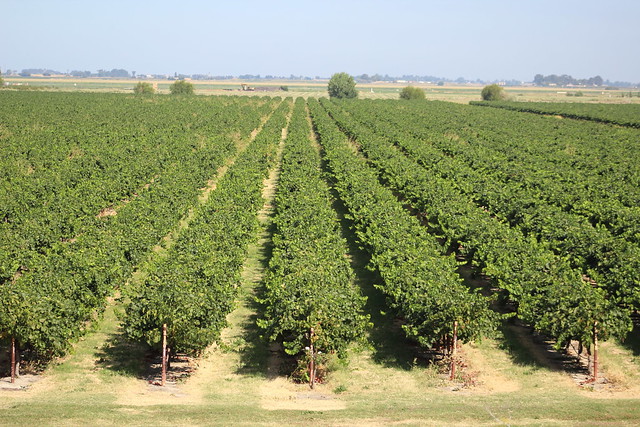 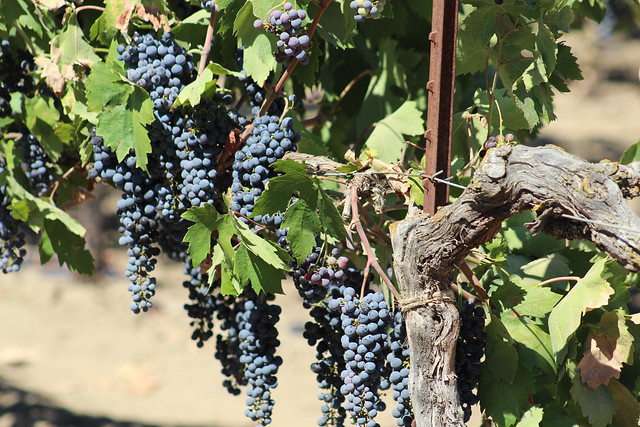 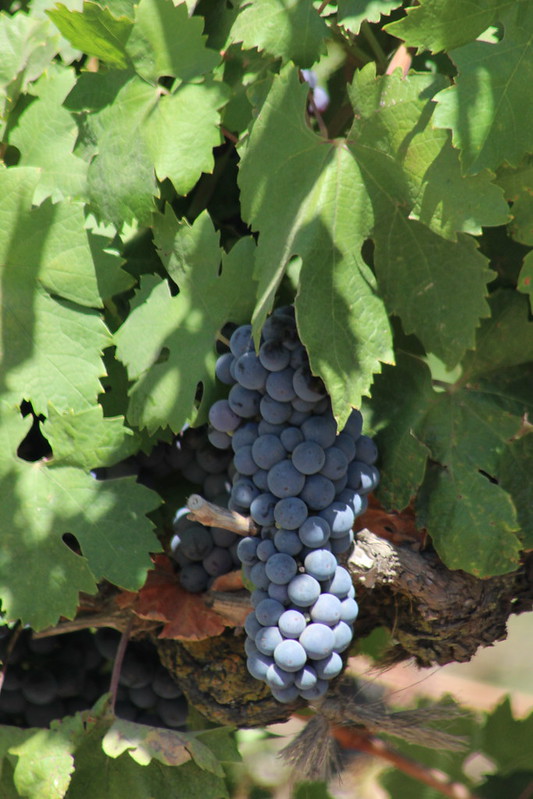 As we were driving out of the area, we decided to check out two more wineries - since we're already here, you know. The facade of the first one did not impress us, I mean it was smaller and looked packed. The other one we visited is the Michael David Winery, which unfortunately was closed for a private party - must be one of the many many weddings that occurred on 8/18/18. Nevertheless, we were able to check out the little store they have out front, but they too were already in the process of shutting down for the day. 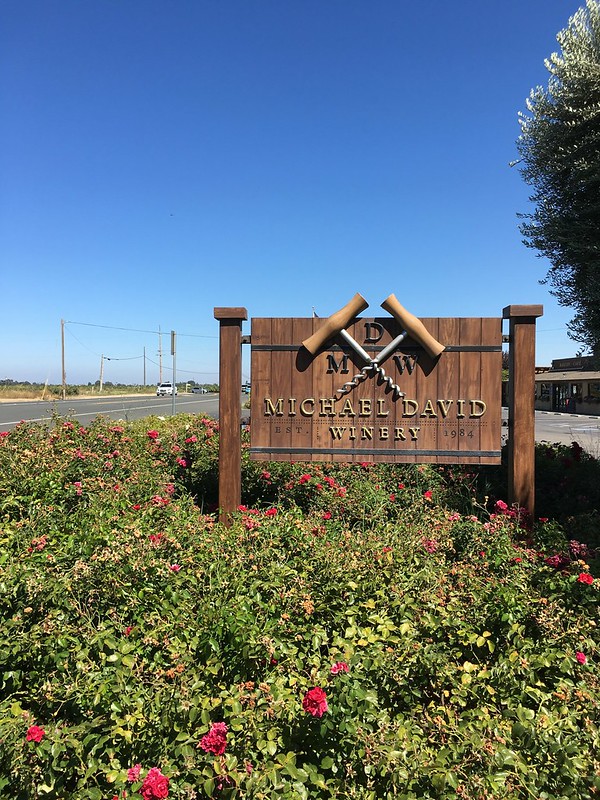 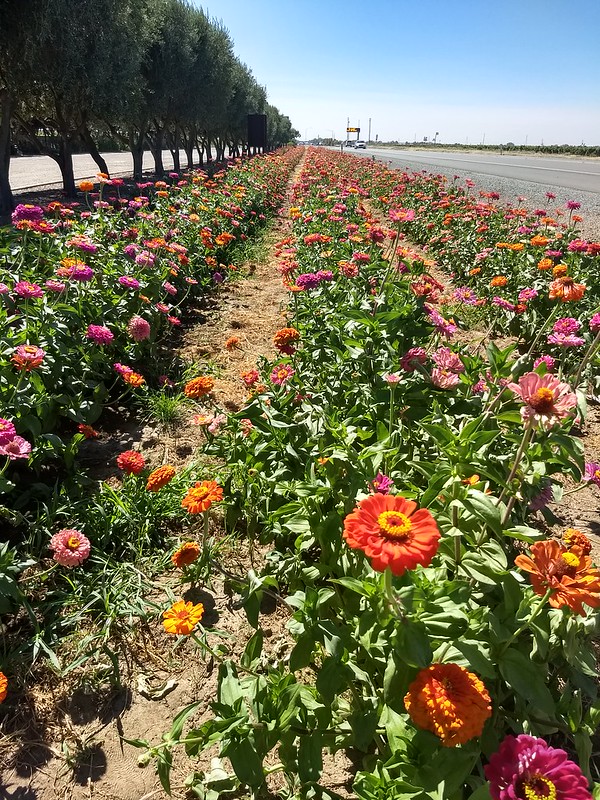 On the drive back home using the route, I was able to capture a few scenes. Note that the sky is hazy due to the wildfires in different parts of Northern California. 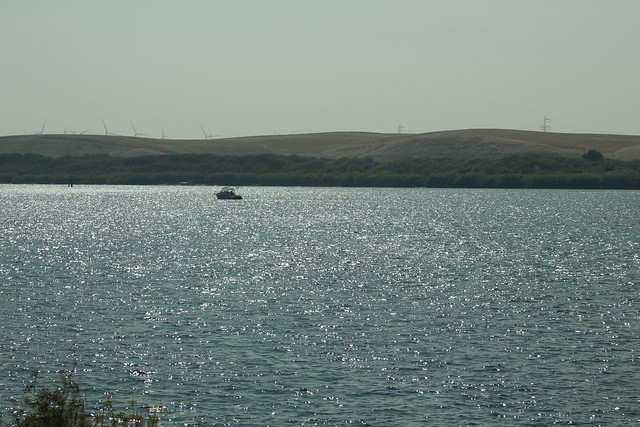 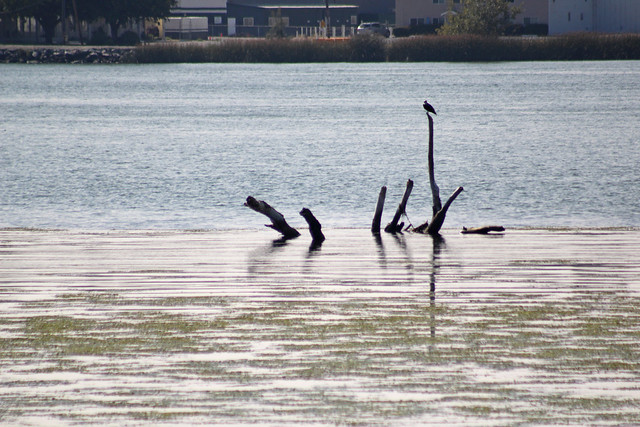 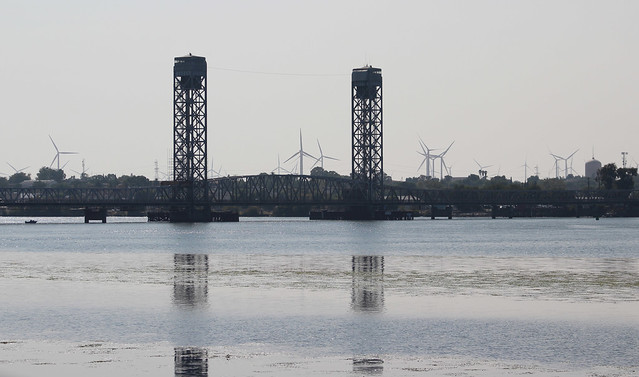 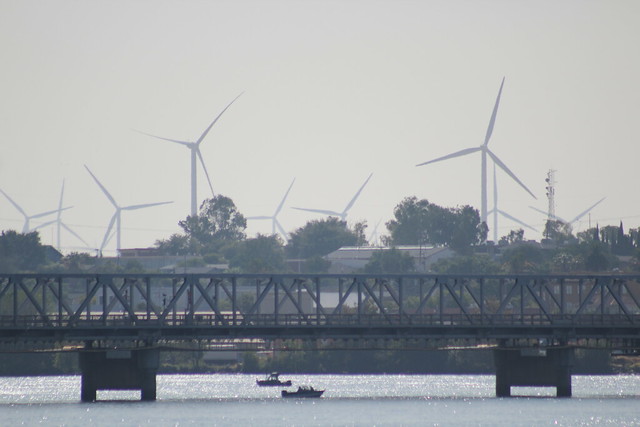 As I was researching about Lodi, I came upon this Creedence Clearwater Revival song called Lodi. Thought I'd share it here. The title of this post came from the chorus of the song: Oh Lord, I'm stuck in Lodi again. Enjoy the song.