A Day in Arrecife (Lanzarote) part 1

The first of 3 consecutive Canary Islands port days is Arrecife in Lanzarote. We walked from the dock to the information Office to inquire about things to do in Arrecife. From there, we walked to town to catch the Hop On Hop Off bus. On the way, we passed by the marina. It was one of the most beautiful port days, weather wise. 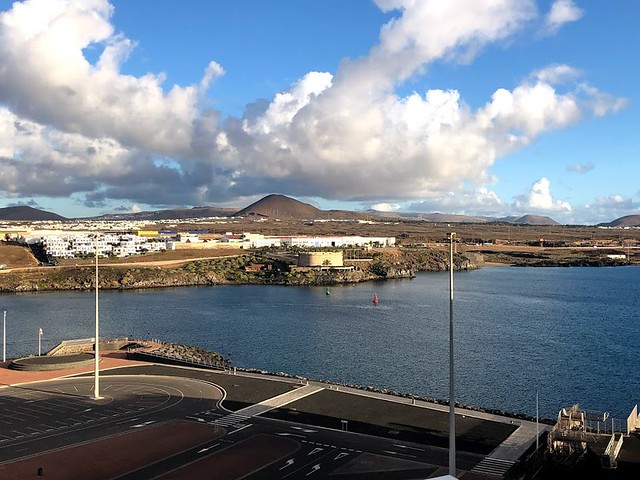 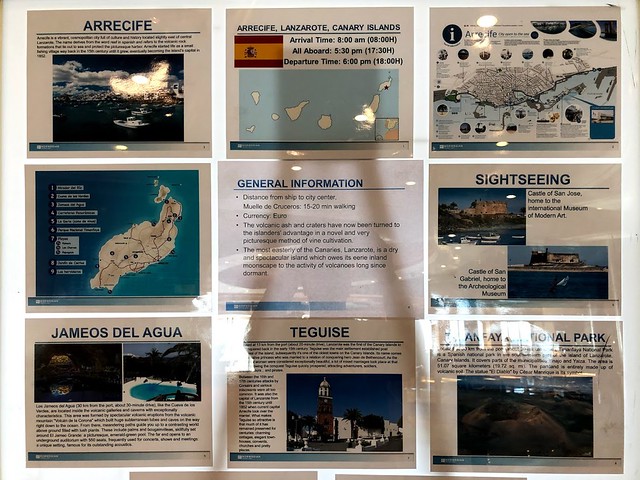 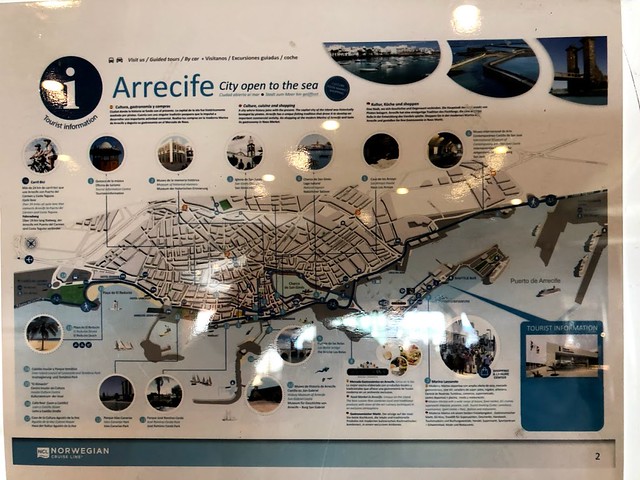 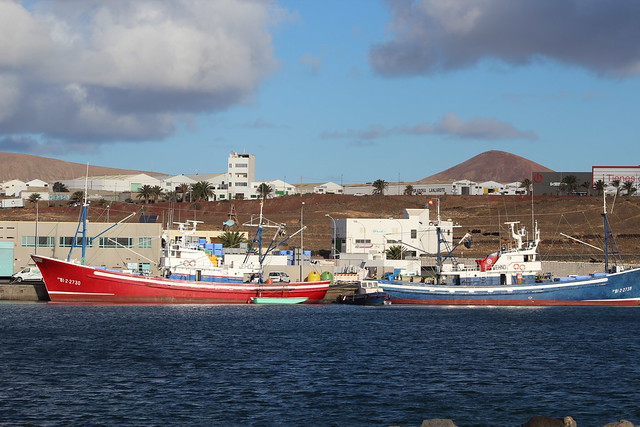 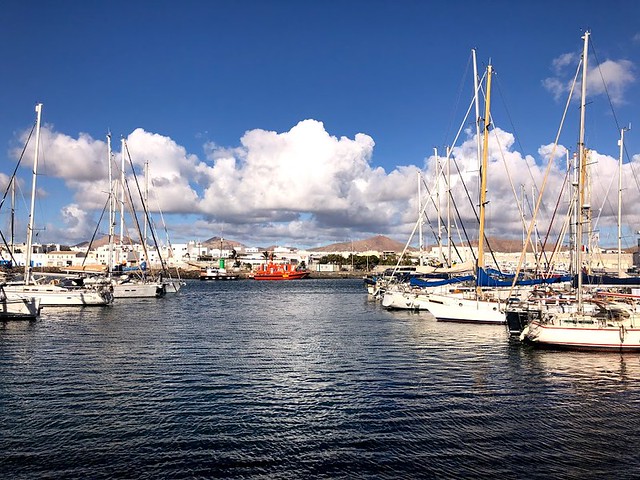 Castillo de San Jose was built in the 1770s as a fortress to defend against pirate attacks. Now it’s an art museum. It’s the first spot we visited after a confusing first hour in Arrecife, in the island of Lanzarote - one of the 8 major Canary Islands - and the first port-of-call in this cruise.

The hop on hop off bus stops at the fortress. Across from it is a trailer that houses an information/visitor center and where you can get souvenir items as well as ask for directions and tips on how to spend a day in Arrecife.

The collection/exhibit is small but interesting. I don’t remember seeing any other artists' works on display that time except for Pancho Lasso. His works are interesting, particularly his sculptures, but I fell in love with his painting called El Baile. I saw a reproduction of the painting in fabric at the visitor center outside of the fortress and did not know that it’s a work of art. I just love the image. I have checked the internet for information about said painting but I didn’t get far. I’m sure somewhere there’s a t-shirt with this design on it and I want one. 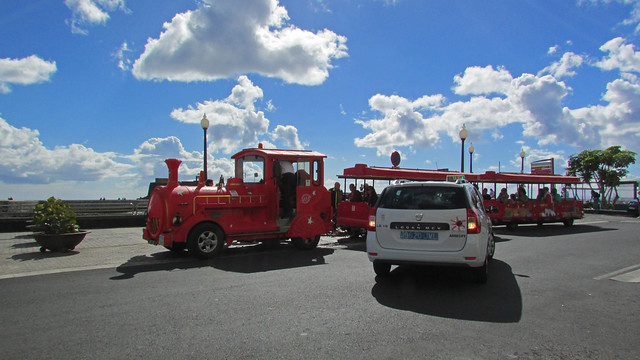 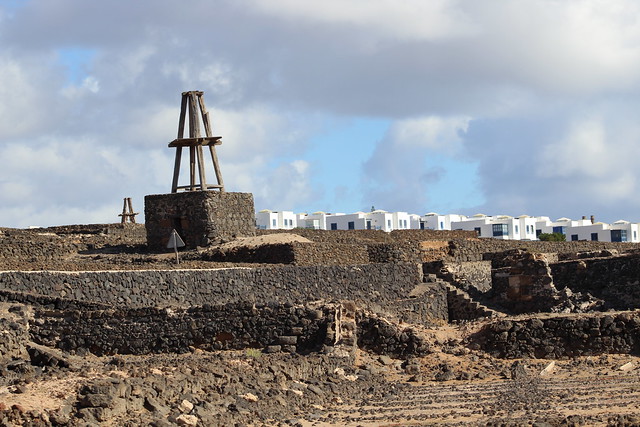 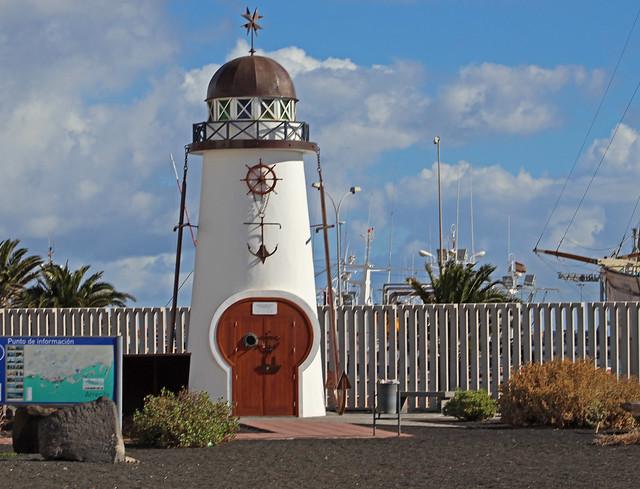 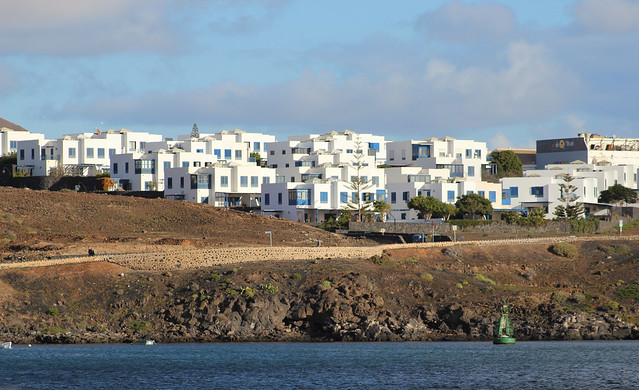 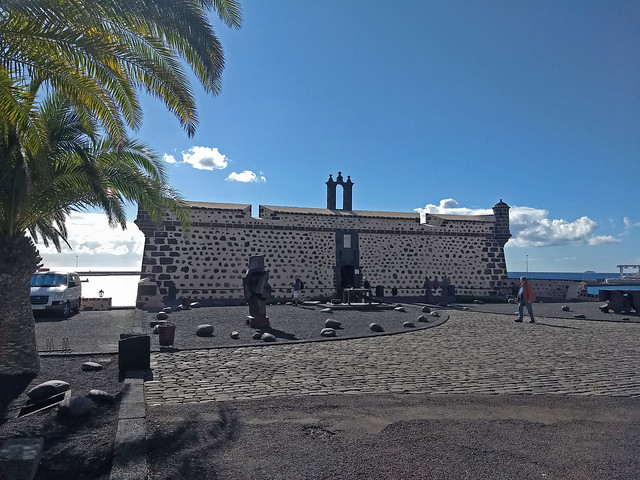 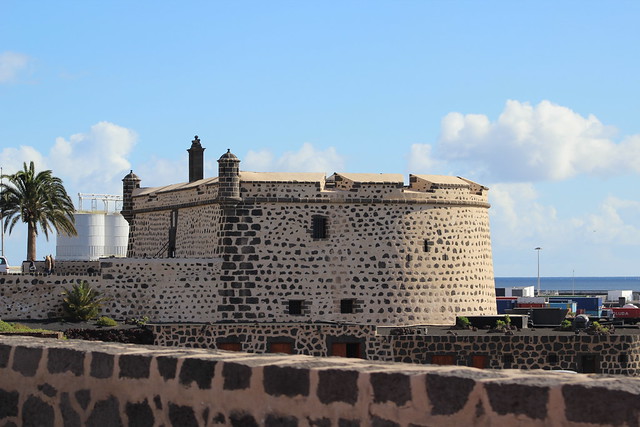 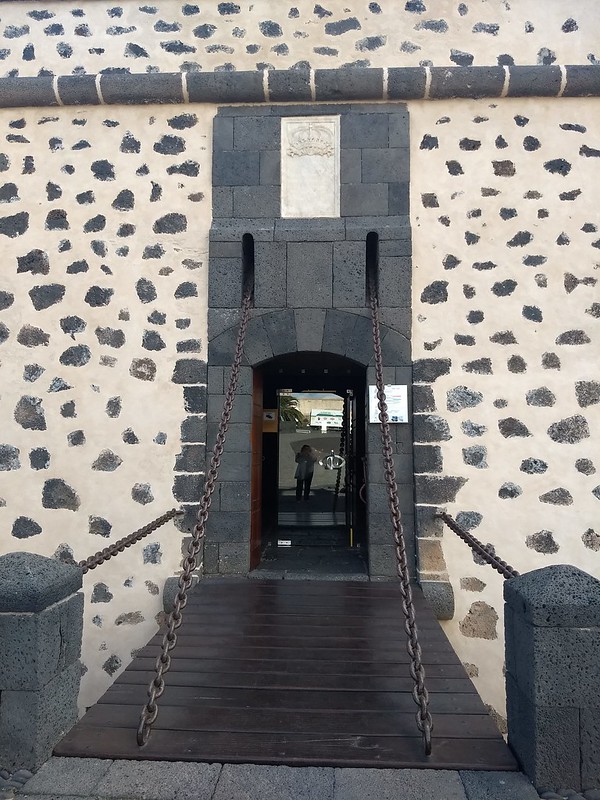 My reflection at the drawbridge glass door. 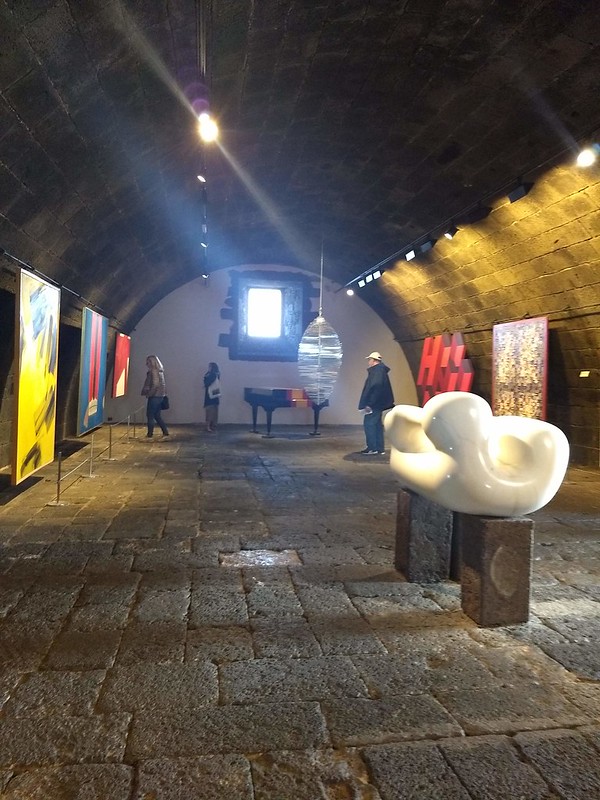 Museum inside the castle. 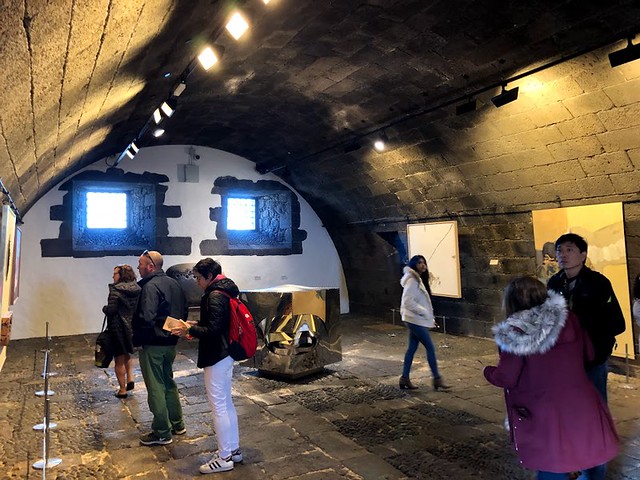 Not crowded inside the museum. 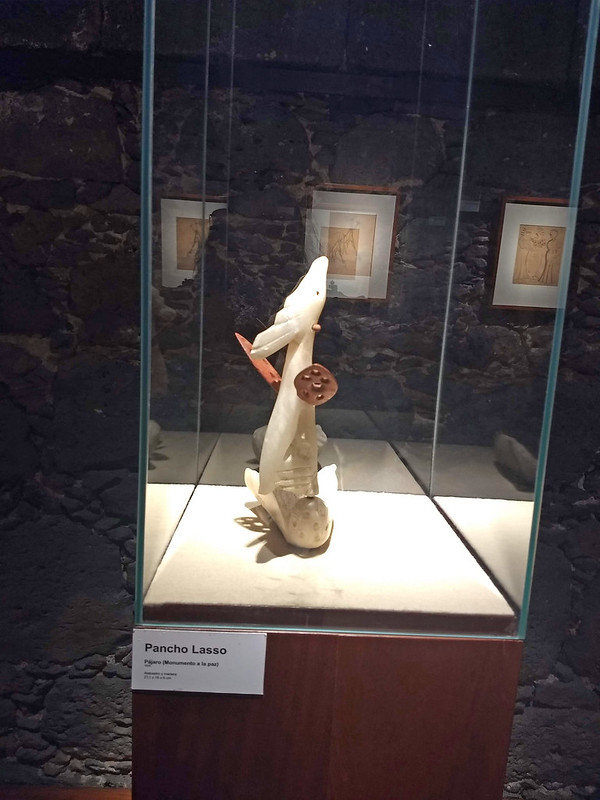 One of Pancho Lasso's pieces. 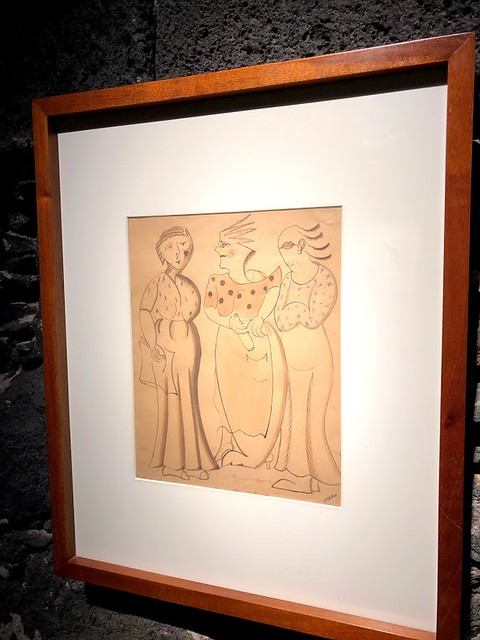 The El Baile by Pancho Lasso. 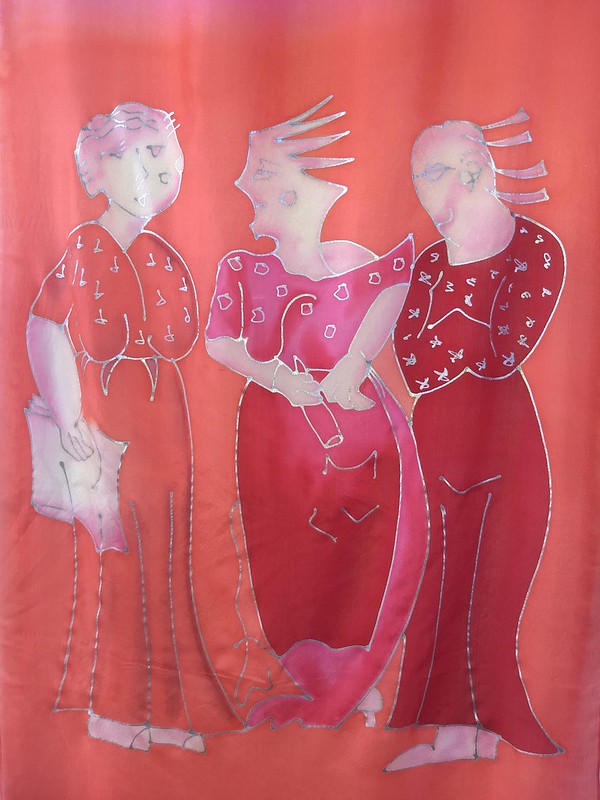 Photos from the castle: 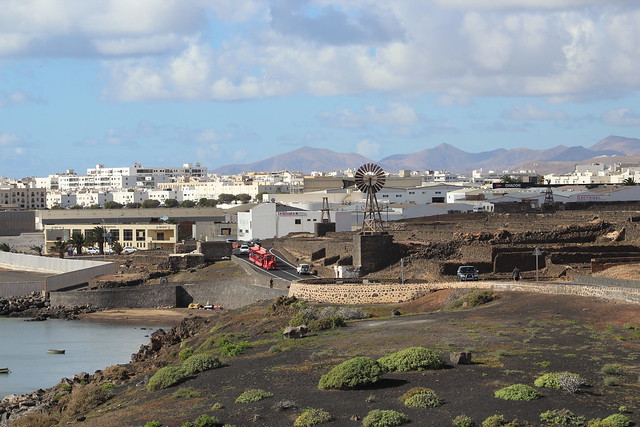 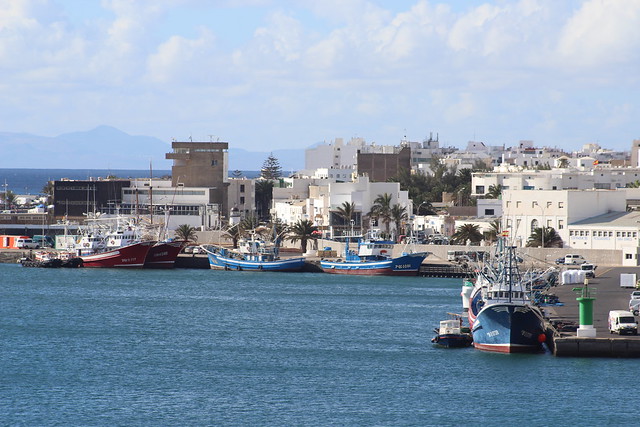 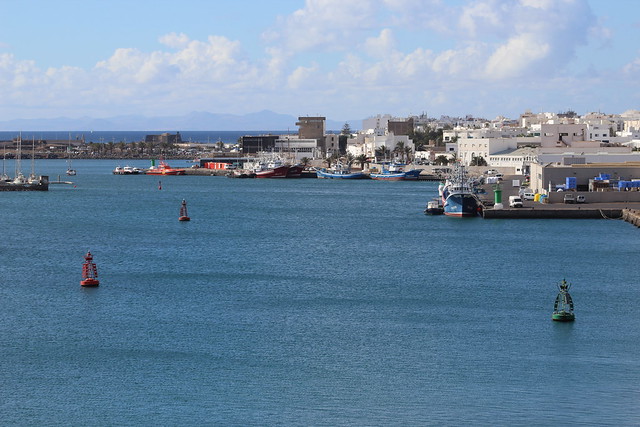 As you know time is of an essence when it comes to port days. So we didn’t tarry here in the Castillo, and boarded the next HOHO bus that arrived. Our plan was to see the green caves or Cueva de los Verdes, some 1 hour away by bus. Initially we thought we’d first go there via a private taxi tour, except that in Arrecife they only have the regular taxis that carry a maximum of 4 passengers. We were 5 and even though we pleaded that we could fit in 5 people in the taxi - they were all skinny except for me - the guy manning the taxi queue was unyielding and stood firm. We did not want to take 2 taxis so we opted for the HOHO.

Thus, when we boarded the HOHO, we asked the driver if he could drop us off at the bus station. Thankfully, there’s a central bus terminal where all the buses stop to pick up passengers, and double thanks it’s a short 1.5 blocks walk from a HOHO stop.

By this time, we were tempting fate. If we could catch the bus immediately, we’d be able to do some sightseeing in the caves. We knew that this cruise would offer more cultural experiences, which is why we were bent on seeing the caves for a little change - some nature tripping. However, we had to wait for the ticket booth to open because apparently it closes for lunch. After about 30+ minutes, we were told that the bus that would take us directly to the caves had just left before the guy went on his lunch. One bus was leaving in a few minutes that would take us part of the way to the caves, then we had to take another bus. So it would mean two bus rides to the caves. The problem aside from time constraints was none of us really knew the exact direction to the caves and how best to get there. Even though Lanzarote is a small island (37 miles long and 16 miles wide) we were worried we’d miss the boat later in the day.

Therefore, we abandoned the plan to see the caves and left the bus station - after waiting for about another 20-30 minutes for the direct bus to the caves to arrive. We walked back to the bus stop to wait for the next HOHO to come around. We have been about an hour in the bus terminal and we have not seen any HOHO to pass by and so we were hopeful the bus would be her soon. Except that it didn’t. We waited for an hour or so in the middle of the road that was converted into park-like structure complete with benches and trees for shade. It was a beautiful day with sunshine galore and mild breeze, but still we were bored waiting for the bus. We were thinking about walking back to the waterfront instead of waiting another hour. As we were deliberating about our next move (we did not want to waste our day in Arrecife waiting in the bus terminal and in the middle of the street for a HOHO bus) when the HOHO bus arrived. 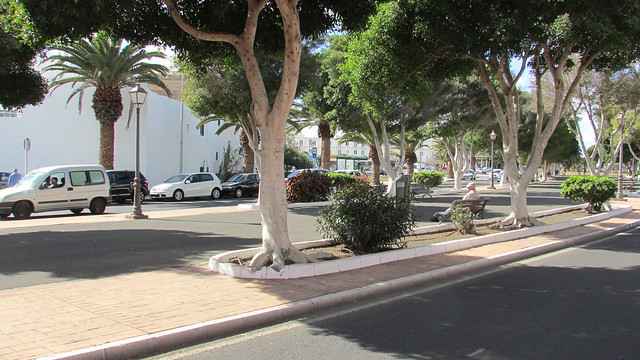 Middle of the street park structure.